skip to main content
Return to Fordham University
You are at:Home»Commencement»Commencement 2022»Chuba Ohams, FCRH ’21, GABELLI ’22: ‘The Biggest Comeback’
Photos courtesy of Fordham Athletics
It was January 5, 2020, and Chuba Ohams was warming up with his Fordham teammates before their basketball game against LaSalle. He remembers jumping up and then landing when his knee gave out. His adrenaline was pumping and he thought he could get up and walk it off, but the trainers stopped him.

“The first thing that came in my head was, ‘My career is over,’” Ohams said, recalling laying on the court while the trainers examined him. “I remember that vividly.”

But a few days after he had surgery, Ohams said he felt more determined than ever.

“Something just clicked in me—[I kept thinking] ‘Just try to have the biggest comeback I can have in my career,’” he said. “My thing was to just put two feet in and just grind it.” If he couldn’t make it happen, he said, then at least he would have tried everything he could.

But he needn’t have worried. In 2021-2022, his first full season back on the court after the injury, Ohams had his best season as a Ram. He finished first in the Atlantic 10 conference and fifth in the entire NCAA in rebounding, and posted a double-double in 21 games, a new Fordham record. (A double-double is when a player records 10 or more in two statistical categories, such as 10 points and 10 rebounds.)

Keith Urgo, the new head coach of Fordham men’s basketball who served as an associate head coach last year under Kyle Neptune, said that Ohams was a special talent on both offense and defense.

“With his size, length, and athleticism, it’s very rare that you’re going to see that type of skill level. He was an extremely versatile player for us, and a mismatch nightmare,” he said, noting that a mismatch means he’s hard to match up against on both offense and defense. “Defensively is where he really got a lot better—one of the reasons why we were 40th in the country’s defense is because he’s able, with his athleticism and length, to switch and guard anyone on the floor.”

Ohams is finishing his master’s degree in media management as he prepares to graduate from Fordham for the second time, after earning his bachelor’s degree in communications in 2021. (Ohams redshirted his sophomore year due to injury, meaning he didn’t play that year, so he had an extra year of athletic eligibility.)

Along the way, Ohams said he learned the importance of patience.

“At the end of the day I learned that whatever I put my mind to and work on—the results will come,” he said, even if they’re not immediate. “ It will eventually come.”

Urgo said that not only is Ohams a special player, but he’s also an “unbelievable human being” and was a “larger than life” figure on campus. 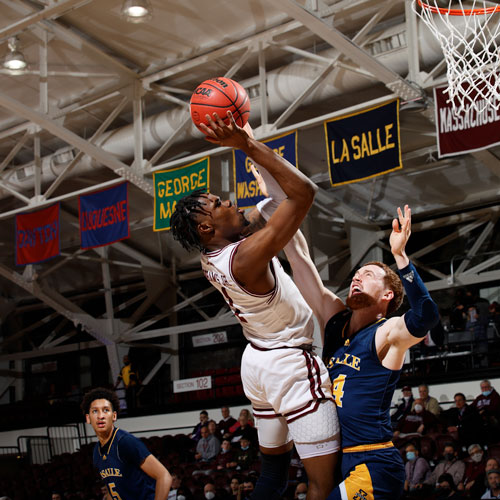 Chuba Ohams goes up with a shot against LaSalle.

“One of our pillars of excellence is gratitude and the other is humility, and he displayed both of those, and as a result, you can see how people reacted to him—from professors, to administrators, to students, they really fell in love with Chuba Ohams,” he said.

Ohams credits his teammates and coaches, including former Fordham men’s basketball coach Kyle Neptune, with encouraging him to keep pushing himself.

“Kyle Neptune was a great coach for me. What made him stand out from some of the coaches that I’ve had—it wasn’t just about basketball with him,” Ohams said. “He wanted me to be the best man that I can possibly be. So he made sure he asked me about my academics, he asked me about the little stuff that I didn’t think mattered.”

Urgo said that he was grateful Ohams was willing to buy into a whole new coaching system.

“I can’t say enough about him because it’s very difficult when a new staff, a new philosophy comes into play, and a sixth-year senior is willing to commit himself,” he said. “Truly impressed, and incredibly grateful to him for his commitment to us as a program.”

For Ohams, who’s been at Fordham since 2016, the end is bittersweet. He chose Fordham, in part, because he’s from the Bronx and playing at the Rose Hill Gym allowed his family to attend his games. Before Fordham, he said, he traveled a lot for games.

“This was the first time for my mom and dad to ever see me play basketball. So I mean, just seeing them in the crowd—I loved every bit of it.”

Urgo said that he’s going to miss both Ohams’ talent on the court and his personality, humor, and support off the court. He noted that as Fordham was looking for its next head coach, Ohams vocally supported him for the job.

“I’m obviously going to miss his bubbly personality, his humor, and his leadership,” Urgo said, adding that he’s also going to miss the chance to develop their relationship further.

Looking ahead, Ohams said that he has a goal of playing basketball professionally, ideally in the NBA. He’s been focusing on preparing for the NBA draft. That preparation included participating in Reese’s Division I College All-Star Game, held in New Orleans during the NCAA Tournament in April, which featured top senior student-athletes from across the country. He scored eight points and had three rebounds.

Ohams said he’s excited to see what the future holds, wherever it takes him.

“I’m born and raised in the Bronx, so it was literally home for me,” he said. “I love this place. I have so many memories. But I’m ready for the next chapter.”