skip to main content
Return to Fordham University
You are at:Home»Commencement»Commencement 2021»In the Footsteps of Ignatius: PCS Celebrates Class of 2021
Photos by Tom Stoelker
At a May 23 diploma ceremony for students graduating from the School of Professional and Continuing Studies (PCS), Joseph M. McShane, S.J., president of Fordham, said that in many ways the graduates had followed in the path of the founder of the Jesuits, St. Ignatius Loyola.

He noted that St. Ignatius, like many of the PCS veterans present, served in the military before he began his university education in his 30s. He was a nontraditional college student and went back to school, Father McShane said, because he thought that it would help him have a better understanding of the word of God.

“You went back to school so you could have a fuller life. A fuller life for him. A fuller life for you. So, on behalf of the Jesuit community at Fordham, I congratulate you and I thank you for reminding us of our connection and yours to our founder,” he said.

Of the nearly 160 PCS graduates, 60 processed on Eddies Parade with more joining in for a virtual ceremony at home.

Anthony Davidson, Ph.D., dean of PCS, said that that the graduates all faced daily challenges that ranged from financial to familial to medical, yet all had excelled and met the challenge of finishing their degrees. He acknowledged those in the class that had excelled beyond their dreams, moving on to several of the nation’s top master’s programs. And he encouraged graduates to build on the success of their peers.

“Every moment counts and time is marching on, so be constant, be dependable, be punctual, don’t waste time, give warmth to people and be their shining light, be passionate, and above all continue to live in the spirit of cura personalis that has so much been a part of your and our spirits here at Fordham,” Davidson said. 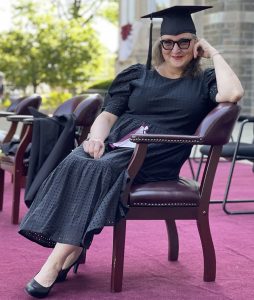 Kelly Jean Clair, before the ceremony

The ceremony’s student speaker, Kelly Jean Clair, arrived early. In heels for the first time in more than a year, Clair said should she take a tumble she made sure to be wearing the school colors beneath her graduation gown. She said she was rather nervous to take to the podium, despite her training as a stage actress, a profession she still works alongside temping. But in her speech, she said she recalled being far more nervous on her first day of class at Fordham.

“I was thinking, ‘Am I going to be the old lady in class?’ Will one of my classmates say, ‘You really remind me of my mom?’ Or would I be able to keep up? Would I really be able to contribute?” she said. “But none of that happened, as a matter of fact, it was quite the opposite. I was treated like a peer. It felt like family.”

In addition, she made it through the core curriculum.

“I don’t know about you guys, but as an English major, I was terrified of math. I mean I hadn’t taken math since I graduated high school back in nineteen eighty… ah, a little while ago,” she said.

“You know what? We worked our butts off! Now, I Kelly Jean Clair, stand before you as a proud graduate of Fordham University. And in the immortal words of Elle Woods from Legally Blonde, ‘We did it!’”