On a recent cold and wet spring morning in Bushwick, Brooklyn, Danielle Wright was beaming her usual sunny smile while volunteering with Student Veterans of America at Fordham (RamVets) at a COVID-relief food pantry. It’s one of the many ways Wright, who retired in 2019 from the U.S. Air Force after 20 years of service, plans to continue her life’s work of serving others when she graduates from the Graduate School of Social Service (GSS) this May with a Master of Social Work degree. On display that day in Bushwick were the qualities of what one might call a “people person,” a gift that will likely serve Wright well as she sets out to help people suffering from addiction. 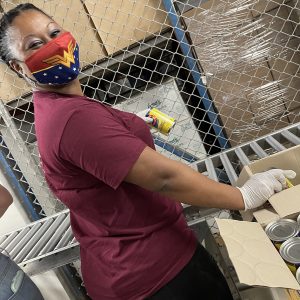 “After leaving the military I wanted to work more with people so I had to decide: What am I good at? I didn’t want to just work to work, I wanted to be fulfilled, and social work met all of what I needed,” she said. “I wanted to make an impact. Also, I like the autonomy of social work, it’s me and my clients.”

Born and raised in Brooklyn, Wright joined the Air Force in 1999 and retired as a master sergeant. In the Air Force she served in a variety of roles, from working in dining, lodging, and deployment facilities to computer records management to communications and signal intelligence at Fort Gordon, Georgia—site of the U.S. Army’s Cyber Command. While in intelligence, she still longed to work directly with people.

After she earned her bachelor’s in social science online in 2017, Wright decided to concentrate on substance abuse when she began her social work studies. Like all GSS students, her first field assignment was chosen for her. She worked at a college in the office of student disabilities, which allowed her to use many of her military organizational skills while arranging services to meet students’ needs. Her second placement was when the “real social work” began, she said. She interned at the opioid treatment program at the Addiction Institute of Mount Sinai. She noted that there’s a personal reason she loves working with that population.

“My parents both passed away early due to HIV as a result of drug use. I always thought that would be my way to help, because sometimes, in this world, real life gets hard,” she said. “I don’t need to be someone who is trying to change anybody. I just want to be there to support them and let them know that not everybody views them negatively.”

Once again, Wright drew from her military experience in her new role. She said that in the military you can’t take things personally.

“Therapy is to heal the client, it’s not to boost me up. People do whatever they need to do, whatever’s best for them, right? You should not want to change them, because that takes that responsibility and puts it on you. That’s a lot of responsibility,” she said. “And people are going to make mistakes, whether it’s relapsing or hurting others, that’s just life.”

Her mentor, Danielle Esposito, is a lecturer at GSS with 13 years of experience working with children and families. Esposito said that Wright’s life experience will protect her from the burnout many new social workers experience.

“It usually takes a while to understand you can’t change a person and that usually happens after your first really tough case,” said Esposito. “You are not there to fix or change, but to support and be a sounding board for whatever a client chooses, especially in recovery.”

Esposito said that Wright was a natural leader in her classes, particularly when it came to a role-playing aspect of the course. She said that Wright was “willing to go anywhere” with a role, either as a client or a therapist, which made the rest of her classmates feel comfortable and safe.

“She would take on the role of the therapist and try out the techniques just taught in the class,” said Esposito. “She’s open to feedback and boy does she follow through with it.”

Wright seems to have absorbed the GSS training that stresses that social workers must take care of themselves before helping others. She volunteers with RamVets, she runs marathons, and she belongs to a MeetUp group that explores parts of the city that she never saw growing up.

“Did you know there’s a lighthouse on Roosevelt Island? I never knew that,” she said, noting that it was also her first time on the tram.

Her first priority will be to land a full-time position where she can help addicts know that they are not alone and that they can count on her not to judge them on their road to recovery.