skip to main content
Return to Fordham University
You are at:Home»Commencement»Commencement 2021»Commencement Ceremonies Celebrate Resilience and ‘Small Acts of Courage’
Photos by Bruce Gilbert, Tom Stoelker, and Chris Taggart. Video by Tom Stoelker and Taylor Ha.
With a week of sunny diploma ceremonies on the Rose Hill campus and a University-wide Commencement videocast on May 22 that honored graduates for their bravery and resilience, Fordham flipped the script on an unprecedented year and offered the Class of 2021 a chance to celebrate and look forward with hope.

At that videocast ceremony, Joseph M. McShane, S.J., president of Fordham, officially conferred nearly 5,500 degrees upon graduates from nine Fordham schools. He acknowledged that it was not the commencement anyone had expected for them. Fordham’s traditional celebration on Edwards Parade was replaced by smaller diploma ceremonies and online broadcasts, with some graduates celebrating only virtually. It was one of many aspects of college life curtailed by the global pandemic “at a time when the whole world has been haunted by fear and overshadowed by loss.”

But, Father McShane said, Commencement was a day to celebrate. While some might have given in to despair, he said, the Class of 2021 persevered.

“You never surrendered,” he said. “Rather, you rose to every challenge that the world threw at you. You gave yourselves to a more than usually intense search for answers and for meaning.” 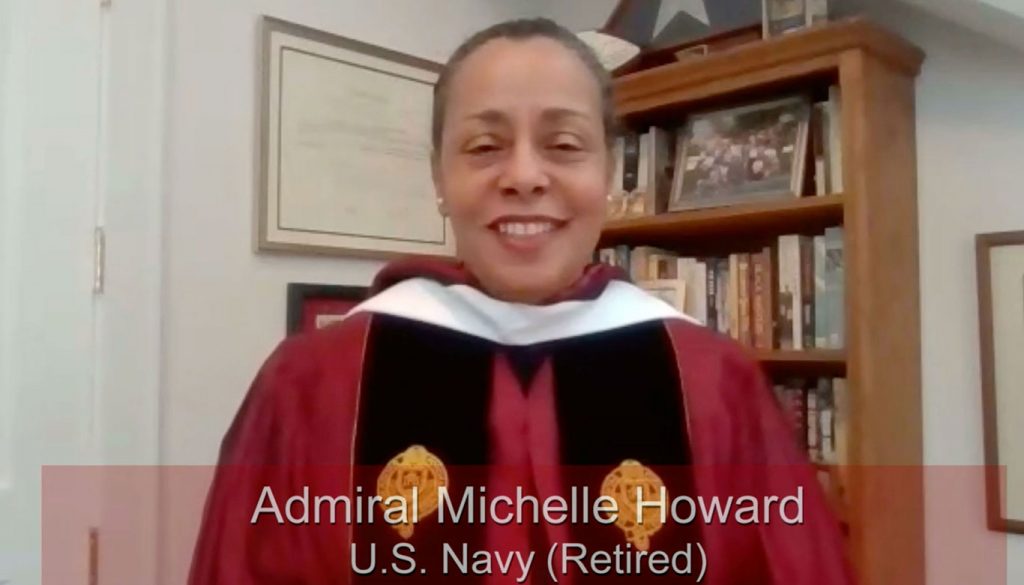 In a remote address, Michelle Howard told the class of 2020 that they have acts of courage within them.

She cited the experience that Lieutenant Commander Wesley Brown, the first African American to graduate from her alma mater, Annapolis, relayed to her in conversations.

When Brown enrolled in the mid-1940s, segregation isolated him in every capacity—in the classroom, the cafeteria, and in his room. His classmates actively tried to sabotage his progress. Keeping one’s quarters spotless was of utmost importance in the naval academy, so when he returned to find them trashed, he braced for the worst when the white officer arrived for inspection.

“This officer is just looking around, and there’s silence. Finally, he says, ‘Midshipman Brown, I suspect this room did not look like this this morning.’ And Wesley Brown said, ‘No sir.’ So, the officer said, ‘Carry on,’ and he left,” she said.

That officer’s actions inspired Brown to continue his studies, she said, and showed that even small acts of courage can make a difference in other’s lives.

“Whether in times of comfort or convenience, times of challenge and controversy, you know you have it within you. You can do these small acts of courage,” she said. 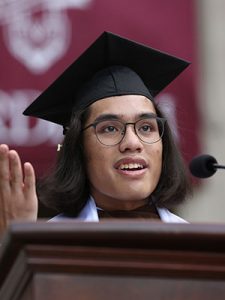 FCLC student speaker Aaron Silver told graduates, “Our education is the mechanism to shift the narrative.”

While many of the themes of the 176th Commencement felt familiar, events also reflected the fact that the pandemic is beginning to ease, but not entirely over. Pairs of seats dotted Edwards Parade in socially distanced configurations. Masks were required at Rose Hill on Monday and Tuesday, but by Wednesday the mandate was lifted for outdoor use in accordance with evolving state health guidelines.

The victory bell that marks the beginning of a University-wide ceremony that in normal times draws thousands to the Rose Hill Campus was put into service several times for smaller diploma ceremonies. More than 1,500 seniors from Fordham College at Rose Hill, Fordham College at Lincoln Center, and the Gabelli School of Business arrived with two guests for ceremonies that ran from May 17 to May 20.

A Moment of Shared Victory

In his speech during the main videocast on Saturday, Father McShane acknowledged the unusual times, and shouted out to the parents and families for their role in a day of “shared victory, shared triumph, and shared accomplishment.”

He noted that the class of 2021 is finishing its studies in spite of living through a year that featured a global pandemic, an economic downturn, a reckoning with racism, a bruising presidential election campaign, and an assault on the U.S. Capitol and the democratic principles upon which our nation has been built and sustained.

“The toll that these cascading plagues has taken on all of us, and on you in a special way, has been enormous,” he said.

A Return to Campus Brings Flood of Emotions 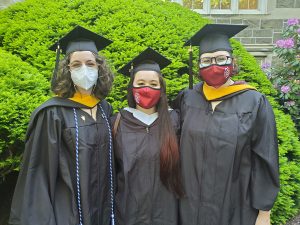 The return to the Rose Hill campus brought forth a range of feelings, some bittersweet.

After a fall of remote learning from her parent’s house in Rochester, New York, Beatriz Barraclough-Tan, an anthropology major at Fordham College at Rose Hill, was grateful to return to campus in January, where she was able to share on-campus housing with her friend, Grace Mulligan Tuck, who she was walking with on Monday.

She was also thankful that she was able to continue to sing with the Scola Cantorum choir. When the pandemic hit, they recorded themselves singing alone for an online project, but eventually, they were allowed to sing in the University Church, behind plexiglass, in limited numbers.

“At the Baccalaureate Mass, we had nine seniors who were able to sing,” she said. “I almost cried yesterday when we were coming out.” 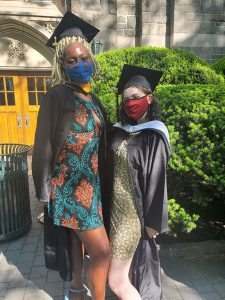 Nearby, Marla Louissaint, a Founder’s Scholar who earned a degree in computer science from Fordham College at Rose Hill, was sporting a custom-made mask with “Claim Our Space Now” and “BLM” on it; the former being the name of a nonprofit she started in May that aims to dismantle white supremacy and save Black lives.

Having come to the United States from Haiti as an undocumented immigrant—she became a U.S. citizen when she was 6—Louissaint said she felt proud, but also felt the weight of her ancestors who were denied education.

She credited her father for pushing her to finish her degree even as she pursued opportunities such as a role in the Broadway show Beautiful: The Carole King Musical, which she toured with in 2018.

“He was like, ‘Yes, you’re an artist, but we came to the States to give you this life. Please finish your degree no matter what.’ It took six years, but we’re here today!” she said.

A Celebration for Parents 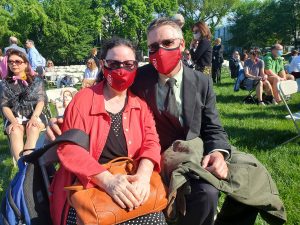 On Tuesday, Lori and Tim Considine were soaking in the atmosphere on Edwards Parade and reflecting on the past four years. To make it to a 9 a.m. diploma ceremony, the Highland, New York residents caught a 5:15 a.m. train from Poughkeepsie. They were there for their son Samuel, who was graduating from the Gabelli School of Business with a bachelor’s degree in finance.

“We were just looking at pictures of when we dropped him off, and I am just so proud of him. This is the happiest I’ve been in a long time,” Lori said.

Both Samuel and his sister Celeste, a junior at SUNY Plattsburgh, opted for remote learning for this year, and to mark the occasion of his return to campus, Samuel wore a pair of hiking shoes that he’d purchased the day that Fordham suspended in-person instruction in March 2020. 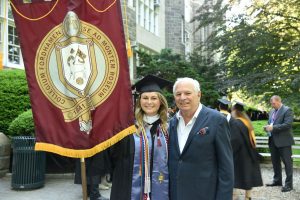 For Anthony Quartell, FCRH ’64, Wednesday was the best day of his life, because his daughter, Olivia was also graduating from Fordham College at Rose Hill.

“I dreamed of this. We have five children,” he said, and finally one was graduating from his alma mater. “It’s a day I wasn’t sure I was going to get to have.”

Olivia, a double major in political science and communications and culture, said Fordham has had a special place in her heart since her first trip to campus.

“Getting to come here after hearing about it from him—he grew up around here—made that very special for me,” she said.

Savoring One Last Swing Through Campus 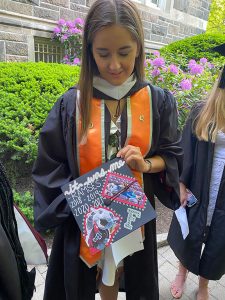 The person inside the Ramses mascot isn’t often known, but on Thursday, Sophia Zehler decided to reveal her identity, with a cap decorated with a photo of her and the mascot head, and a line that reads “It was me.”

When she transferred to Fordham her sophomore year, Zehler heard about an opening for the mascot position and decided to give it a shot. Her favorite Fordham memory was appearing as The Ram on The Tonight Show with Jimmy Fallon that year.

“It’s exciting to be here. It’s not how I wanted it to end, but I’m happy I got a lot of experiences like this,” she said. 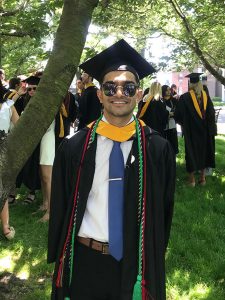 For Nel Patel, a Rockaway, New Jersey, native who majored in applied accounting and finance at the Gabelli School of Business, just being on Edwards Parade on a warm spring day on Wednesday was reliving his fondest memory.

“After four years, I can say this place is probably one of my favorite places in the world,” he said.

“I’m glad I could share this moment with my classmates and friends. It will definitely be special to reminisce about this down the line.”

The School of Law will confer diplomas in a virtual ceremony on Sunday, May 23, that will feature an address by former Secretary of State Hillary Rodham Clinton. An in-person ceremony will be held at the Rose Hill campus on Monday, May 24.

In addition, the University will hold in-person ceremonies for members of the Class of 2020 the weekend of June 5.