Fordham News spoke to many 2021 grads about their favorite Fordham memories, what they’ll be doing after Commencement, and what it means to graduate during such a challenging time. 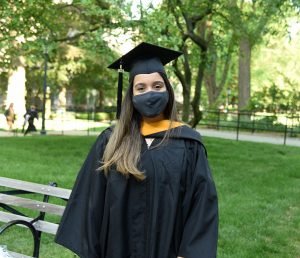 For Mariela Breton, FCRH ’21, graduation day was more than just the culmination of her accomplishments at Fordham.

“I’m first-generation so it means a lot to me,” she said. “I’m looking forward to getting a better job, financially supporting my family.”

Breton, a psychology and Spanish studies double major, said that her favorite class was multicultural psychology, which examines psychology through cultural and sociohistorical perspectives. 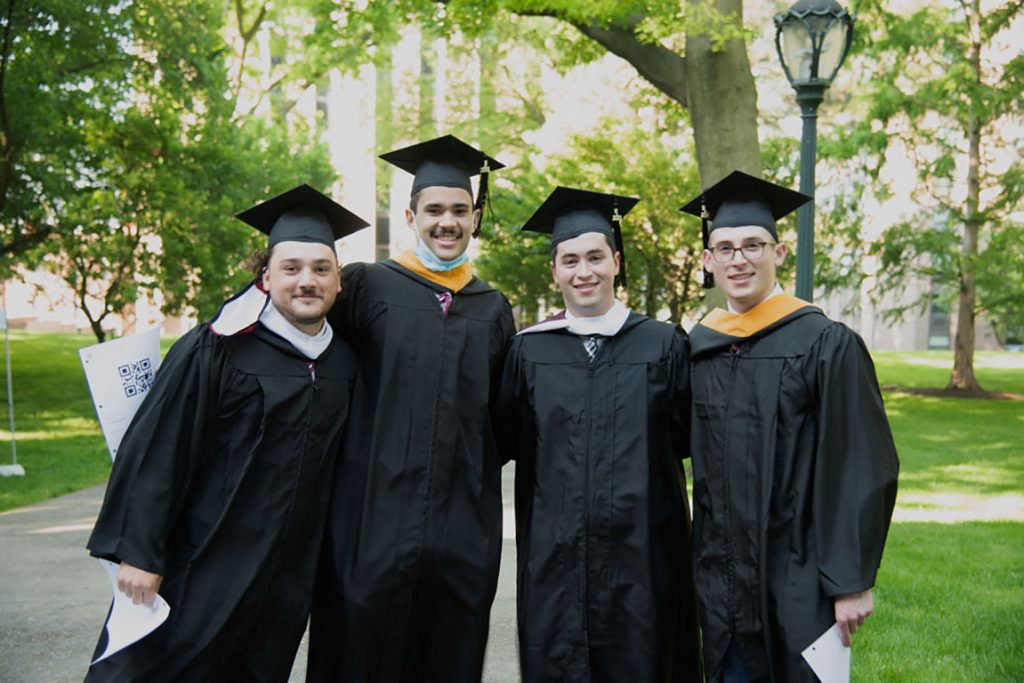 Camaraderie, teamwork, and friendship were the things that helped graduating Fordham College of Rose Hill students Charlie White, Nick Ulto, Tom Hurst, and Joey Randazzo get through the last 14 months. The men, who were all a part of Fordham’s rugby team, said that it was good to know they had support.

“It was pretty challenging, but we all have each other,” White said. “We all rallied around each other as a group of guys playing a sport, so we really all had each other’s back.”

White said that this was a theme for the team, even before the pandemic.

“We would always go out on the weekend and try to plan social events and we were just trying to include everyone; that’s the best part about [rugby],” he said. 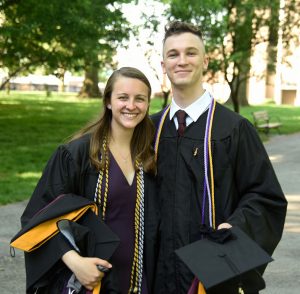 “A couple of kids in my dorm, kids in my classes, kids I met in the cafeteria—it was a good way to connect those first few weeks,” he said.

Some of those friendships and connections from that team lasted all four years, including one with Saige Mitchell, also FCRH ’21.

For Mitchell and Langan, reuniting on the Rose Hill campus for their diploma ceremony was the first time they had seen each other and their friends in person in over a year.

“I’m really grateful that we’re able to be here, said Mitchell, who’d been taking all of her classes virtually.

Both said that their classes at Fordham helped prepare them for the future.

Mitchell, who will be starting medical school at Duke University, said that her biochemistry class had the most impact.

“I’m a biology major and I took it through the chemistry department. I met a really great mentor, and I’ve been doing research with her for about a year and a half,” she said.

For Langan, who is applying to graduate school, his upper-level numerical analysis class encouraged him to study math in depth.

“It was fascinating to learn what was out there beyond the normal level of math that I’ve learned my whole life,” he said. 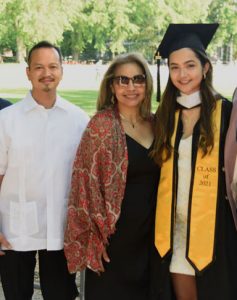 Lucianne Magnibas with her parents

Being back on the Keating steps reminded Lucianne Magnibas, FCRH ’21, of her favorite Fordham memory: the annual candle-lighting ceremony for first-year students.

“As an orientation leader, I got to experience that over and over again and it’s always really touching,” she said.

Magnibas, a commuter student who majored in international political economy, said that she was grateful to be back on campus after the last year.

“These past couple of weeks, being on campus and then of course graduating on Keating brings me back to why I love it here so much,” she said.

Her father, Edwin Maginbas said he was so proud of all his daughter has done so far.

“She’s accomplished a great deal here,” he said. “We’re so happy with the University and the school. She has a great school spirit and participates even as a commuter she’s very involved. We’re just ecstatic, very proud parents.” 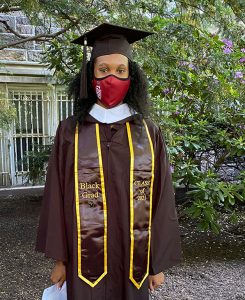 Jade Kennedy Chrichlow, FCRH ’21, was an African and African American Studies major and peace and justice minor. She’ll be starting Fordham Law in the fall.

“My intro to Peace and Justice class with Professor Garnet Kindervater was really amazing. I used that class for my personal essays for law school, and it really just transformed how I thought about peace and justice because what’s justice for one person may not be justice for another person,” said Chrichlow, who was a transfer student to Fordham.  “I find that even in my thesis I cited things from that class. I constantly see myself going back to that class and telling everyone about it.”

Alyssa Grimando, GABELLI ’21, came from East Northport, New York, to pursue a global business degree on the Lincoln Center campus, with a minor in sustainable business. She’ll soon be starting a job with Bank of America. Her favorite Fordham memory is studying abroad at Fordham London. Graduating in person was a special day for her, she said.

“It’s been a long time coming, and a lot of hard work, and I’m glad we’re being recognized for it.” 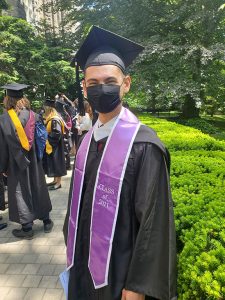 Tyler Raciti, FCRH ’21, said graduation is “a special moment” for him. When I came to Fordham, it was in the backdrop of my father passing away. Being here, I feel like he’s with me.”

“I’m so happy that Fordham was really embracing diversity and inclusion,” he said, citing that ceremony and other Diversity Graduation Celebrations.

He was also the founding editor of the Fordham Undergraduate Law Review. “Great minds,” he said of his fellow students. “I’m going to miss them.” 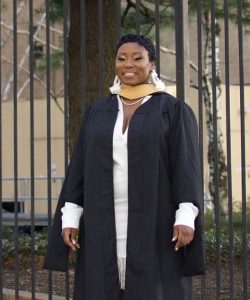 Shaniqua Orr, GSS ’21, said she had to push herself to finish her Master’s in Social Work, and that it’s because of her faith that she did. “I was raised in foster care, but I maintained my relationship with my mom and dad, who both passed away this past year,” said Orr, who served as student speaker at the Graduate School of Social Service’s virtual ceremony. “I feel like I can identify with my patients because I’m able to tap into their feelings. Social work is not for the faint of heart. It’s all about delivery: What you say and how you say it. Like my mom used to say, ‘You can get more bees with honey than vinegar.’ But it’s mostly about being transparent and leaving your opinions outside the door.”

Ray Mitchell, GSAS ’21, was no stranger to Fordham when he set foot on the Rose Hill campus in 2017. The Edmonton, Canada, native spent a month at the University in 2016 when he earned an international diploma in humanitarian assistance from Fordham’s Institute of International Humanitarian Affairs.

He was so impressed, he signed on to earn a master of arts in international humanitarian action, which is jointly offered with the Graduate School of Arts and Sciences. On Saturday, Mitchell, who currently works for a company contracted by NATO to supervise the removal of landmines in Afghanistan, Iraq, Mali, Ukraine, and Kosovo, was one 136 students to receive their diplomas at a virtual ceremony following the University’s main commencement.

He said he was humbled to work with IIHA faculty such as humanitarian programs director Larry Hollingsworth, and senior fellow Anthony Land. He wrote his master’s thesis about private medical support for humanitarian missions and said he’ll apply the lessons he learned to his current work.

“The way that I do operational planning and the way that I do strategic management has forever changed because of this program. I’ll focus on sustainability and localization at the national level from the very start of mission planning,” he said. 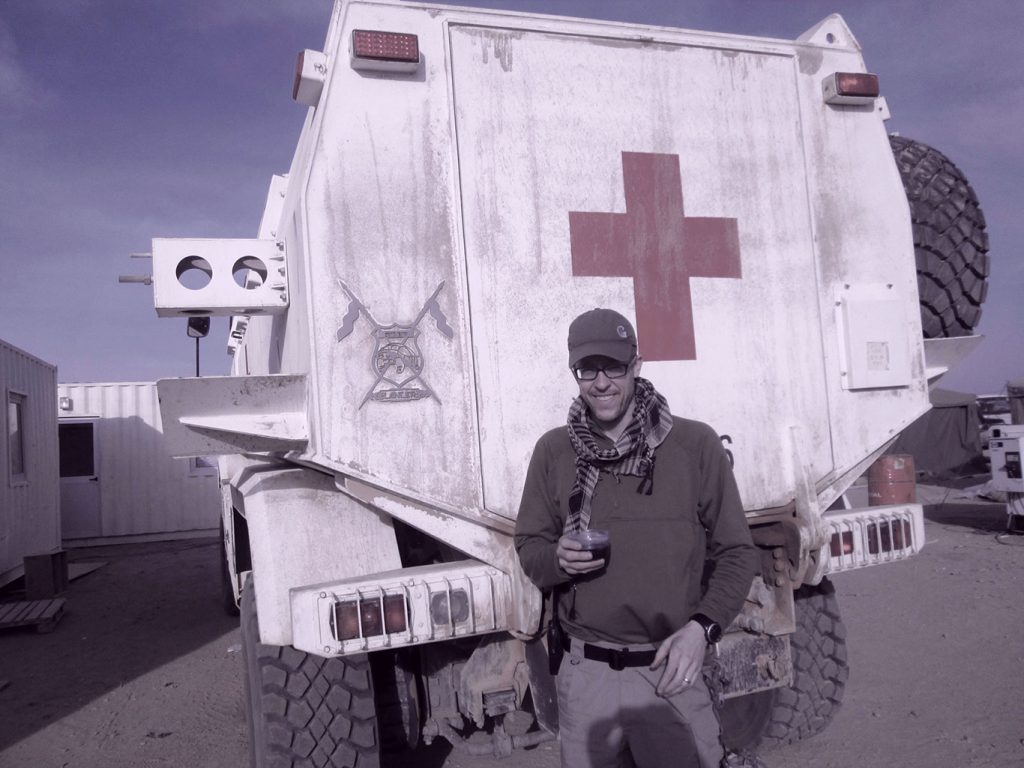 Ray Mitchell in Kabul, Afghanistan, in 2013.