skip to main content
Return to Fordham University
You are at:Home»Commencement»Commencement 2021»At Gabelli School Diploma Ceremony, Celebrating Purpose-Driven Business
All photos by Bruce Gilbert
Addressing new master’s and doctor-level graduates of the Gabelli School of Business on May 25, Edward M. Stroz, GABELLI ’79, called on them to practice the Jesuit values of Fordham throughout their careers—and to remember that the purpose of business is “to create wealth, which is more than just profit.”

“Wealth encompasses a caring workplace, quality products and services, and care for the environment,” said Stroz, a cybersecurity expert and former FBI agent who was awarded an honorary doctorate at the ceremony.

These days, he said, “it’s not just a ‘buy low, sell high’ world. Investors, customers, regulators, and employees are seeking businesses that function with purpose to serve a broader community while using a sustainable model.” 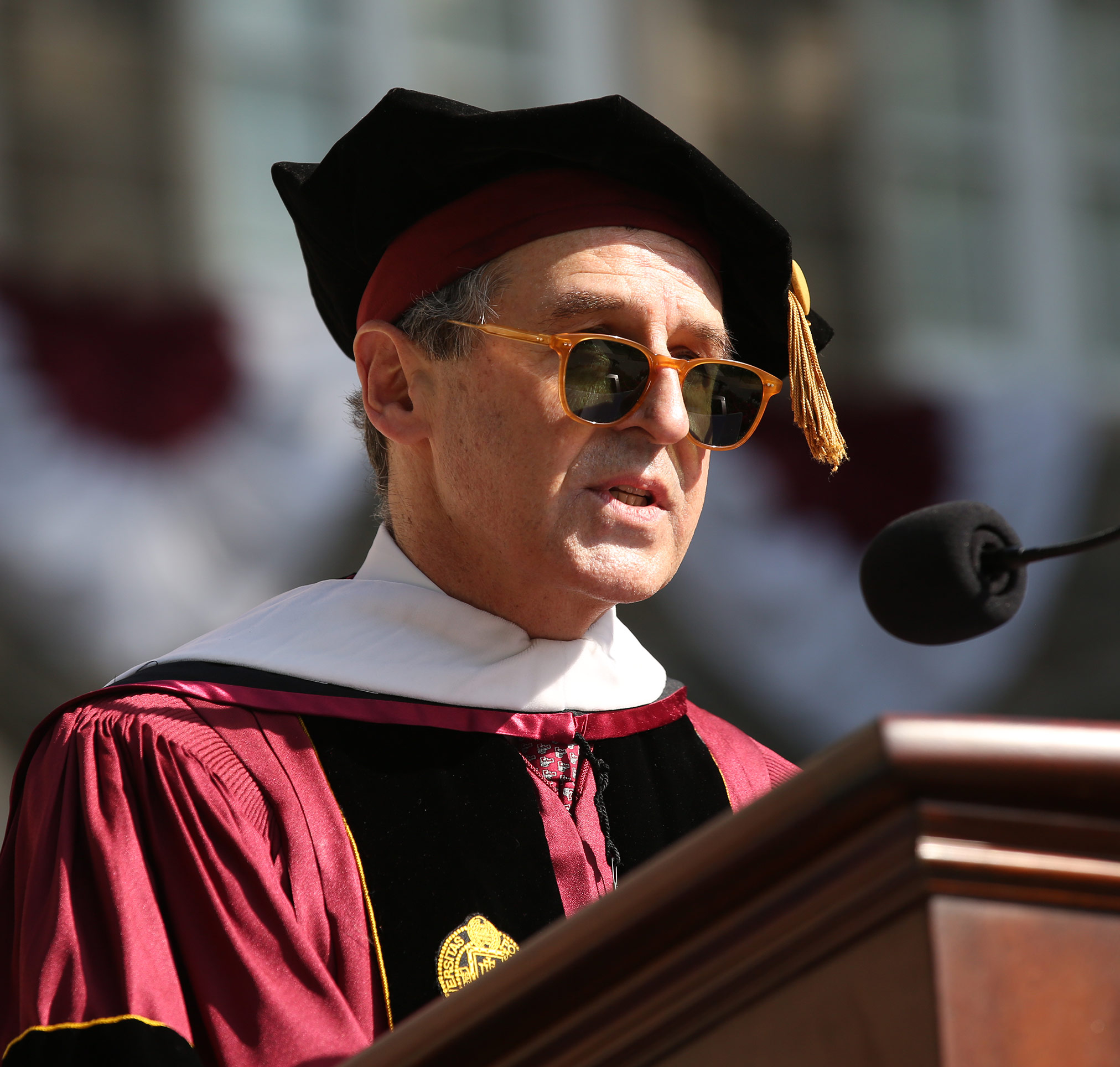 Stroz spoke at the Rose Hill campus on a sunny, mild afternoon before approximately 275 graduates who were seated on Edwards Parade in socially distanced chairs, an arrangement made necessary by the coronavirus pandemic that prompted the University’s pivot to virtual and hybrid education over the past year.

On the day of the ceremony, graduates seemed to shrug off the trials of the past year, savoring the moment as they were cheered on by family and friends (each graduate was allowed two guests).

In all, the Gabelli School celebrated 973 master’s and doctor-level graduates on May 25, with many opting for the virtual diploma ceremony that was videocast that morning. It featured an address by Fran Horowitz, a 1990 MBA graduate of the Gabelli School, who spoke about the lessons learned on her way to reaching her current position as CEO of the apparel company Abercrombie & Fitch.

The importance of the Gabelli School’s culture and values was a common theme among speakers. In her own remarks, Donna Rapaccioli, Ph.D., dean of the Gabelli School, recounted the graduates’ many achievements, such as completing consulting projects; providing advice to major firms like Fidelity Investments or to nongovernmental organizations; and developing original research in auditing, capital markets, and other fields.

“But no matter which courses you chose … you all experienced and contributed to something in common, and that is the Gabelli School culture,” said Rapaccioli, a 1983 graduate of the school. “It values business with purpose. It values teamwork and lifting one another up, recognizing that we can achieve much more together than we can alone. It values questioning our outlook on the entire world. It values academic and professional excellence, and the strong belief that there is always a better way.”

“I challenge you to remember the role that you need to play in creating this kind of culture for others,” she said.

Delivering the invocation, Joseph M. McShane, S.J., president of Fordham, noted that none other than Pope Francis has said that business is a noble vocation, “provided that those engaged in it see themselves challenged by a greater meaning in life.”

“In the course of their time in our midst, these, the members of Gabelli’s Class of 2021, have come to believe that they … are called to be the kind of prophetic business leaders that the world always needs, but especially needs at this inflection moment in human history,” Father McShane said.

In his remarks, Stroz—a Fordham trustee fellow—told his own story of pivoting from a career with the FBI to being an entrepreneur. Most new businesses fail, and “many people did not expect someone with my background to be able to run a successful business,” he said.

The firm he co-founded was Stroz Friedberg LLC, focused on cybersecurity and digital forensics. It did not fail; rather, it grew, and by the time it was sold to Aon PLC in 2016, it employed 500 people in 14 offices worldwide. Its “secret sauce” was the subject of a case study at Harvard Business School, where Stroz lectured about the firm.

What did his Fordham education have to do with this success? “Almost everything,” Stroz said.

“I took the Jesuit values to heart about care for the individual and aim to treat everyone with respect,” he said. “When I was growing my firm … I was able to identify and attract some of the best people. To this day, the aspect of my firm that I am most proud of is the quality of the people who elected to work for us and why they stayed.”

He mentioned the book My Billion Dollar Education: Inside the Mind of a Rogue Trader, published in 2014 by Toshihide Iguchi, whom Stroz arrested for fraud during his days at the FBI. The book contains this dedication: “To Edward M. Stroz. Without his compassion for humanity and dedication to fairness, I would not be here to write this book,” Stroz said.

“When I arrested [him], I wanted to ensure that he was treated justly and would respect how the American justice system worked so that he would tell us the truth about what he did,” Stroz said.

In her address during the virtual diploma ceremony, Horowitz urged the graduates to “challenge yourself and take risks,” giving the example of her own move to become president of Abercrombie & Fitch’s Hollister brand. 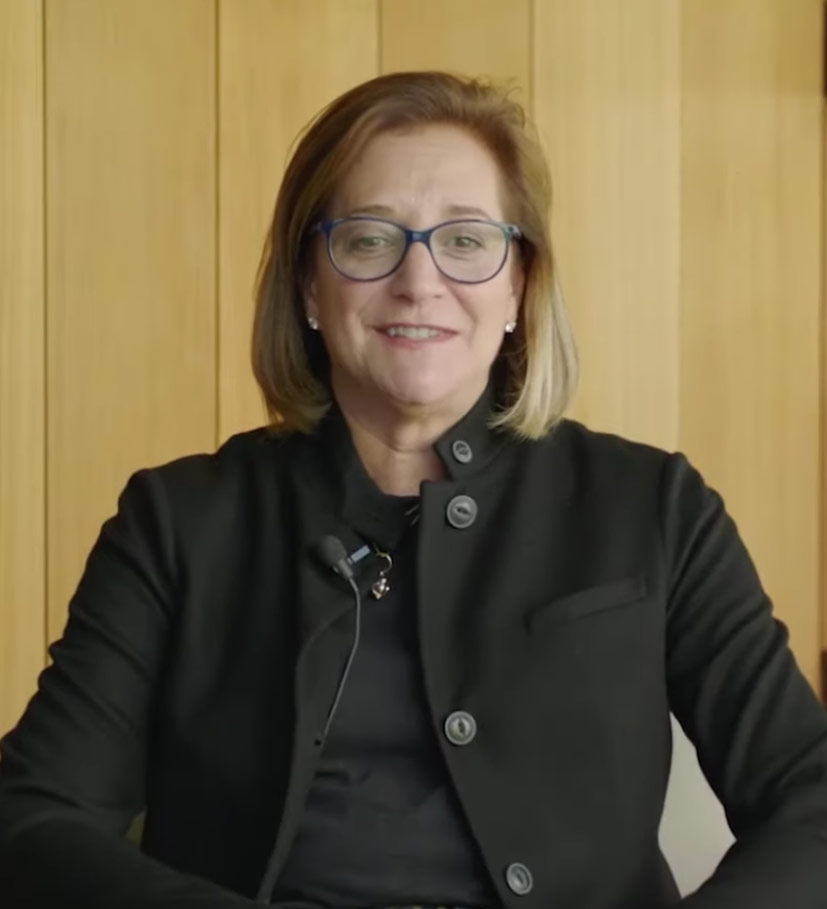 “My biggest risk, moving to Hollister when many said I could not revive the brand, yielded the biggest reward,” she said.

It was the opportunity of a lifetime “because of the chance to reinvent a global iconic brand,” she said. She became CEO of Abercrombie after three years in that role. “I firmly believe that the financial and leadership skills that I learned at Gabelli and everything I went through during all [my]career moves … got me to where I am today,” she said.

She noted that there were many who discouraged her from pursuing an MBA. “But I stuck to my guns and trusted my gut, and took what many thought to be a big risk, and I have never looked back.”

She spoke about attitudes and practices she learned along the way to becoming CEO at Abercrombie. Among them: push boundaries, stay curious, do more than is expected. These were especially important when store closures because of the pandemic presented the “unacceptable” prospect of Abercrombie losing 70% of its revenue, she said.

“We quickly pivoted and found new ways to cater to our customers and drive business forward, accomplishing in one year what we thought would have taken five,” she said. “We could have succumbed to the crisis and done the minimum to keep ourselves afloat. Instead, we used it as an opportunity to work stronger, smarter, and faster than ever before.

“Now it’s your turn to build on your experience and to get even stronger, smarter, and faster,” she said.

Balance “makes us well rounded and better critical thinkers,” she said. “Even when it seems impossible, find time to step away from your desk to make meaningful memories with your friends and loved ones.” 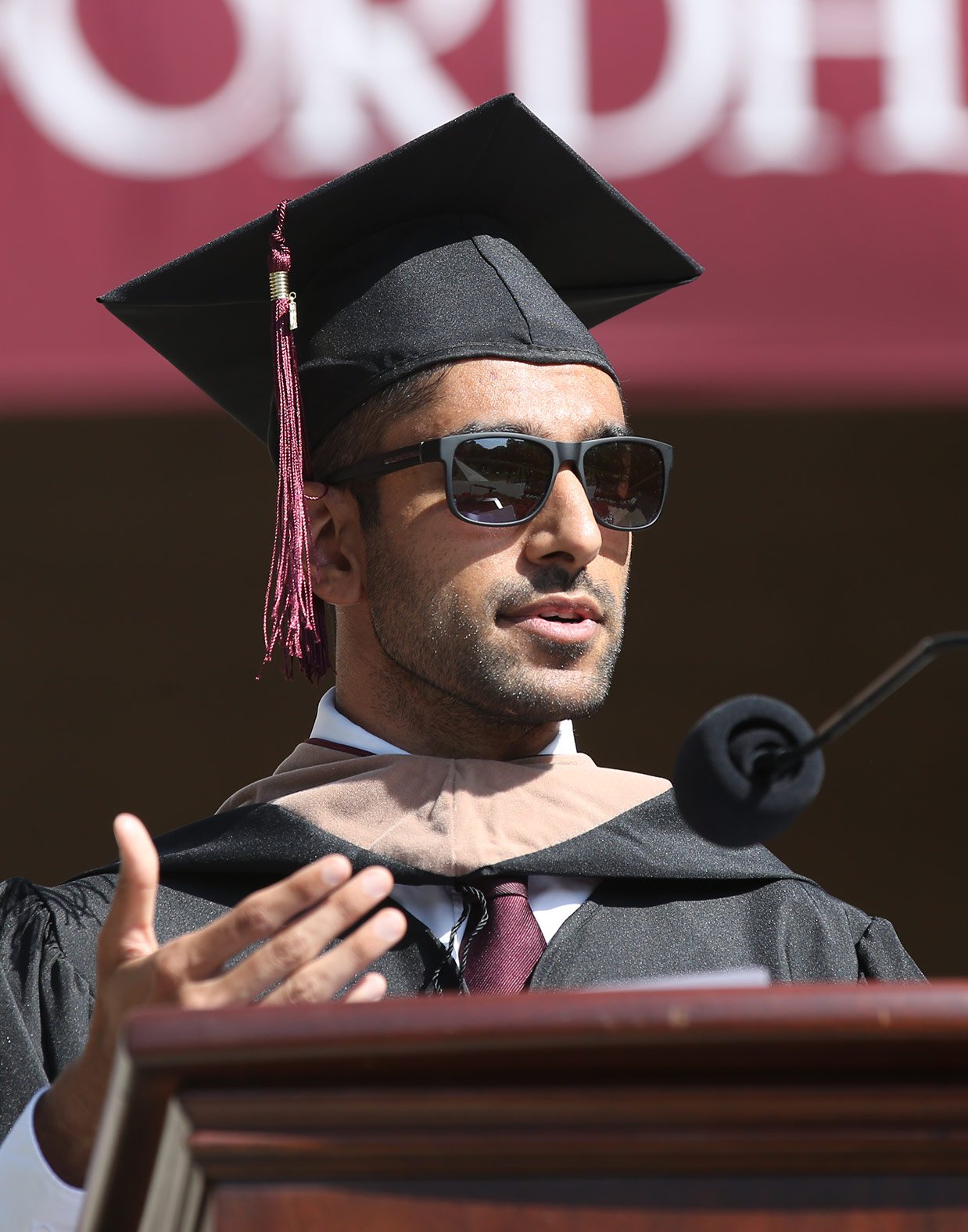 One of the two student speakers, Anosh Ravikumar Iyer, an MBA graduate and president of the Student Advisory Council, joked that “it’s a pleasant change to address more than 20 people without a screen between us.”

“Our grad school experience wasn’t anything like what we imagined,” he said. “We had to treat Zoom like the best friend we never had. We made the phrase ‘Can you hear me now?’ part of our daily vocabulary,” he said.

“The struggle has been real, but the willpower and determination you have showcased through it all is second to none,” he said. “To our loved ones, your unwavering support is what we needed, and to our faculty, your guidance and mentorship is why we succeeded.”

The other student speaker, Omolola Kufile, who earned an M.S. in marketing intelligence, said it had been an “amazing” experience despite the challenges. 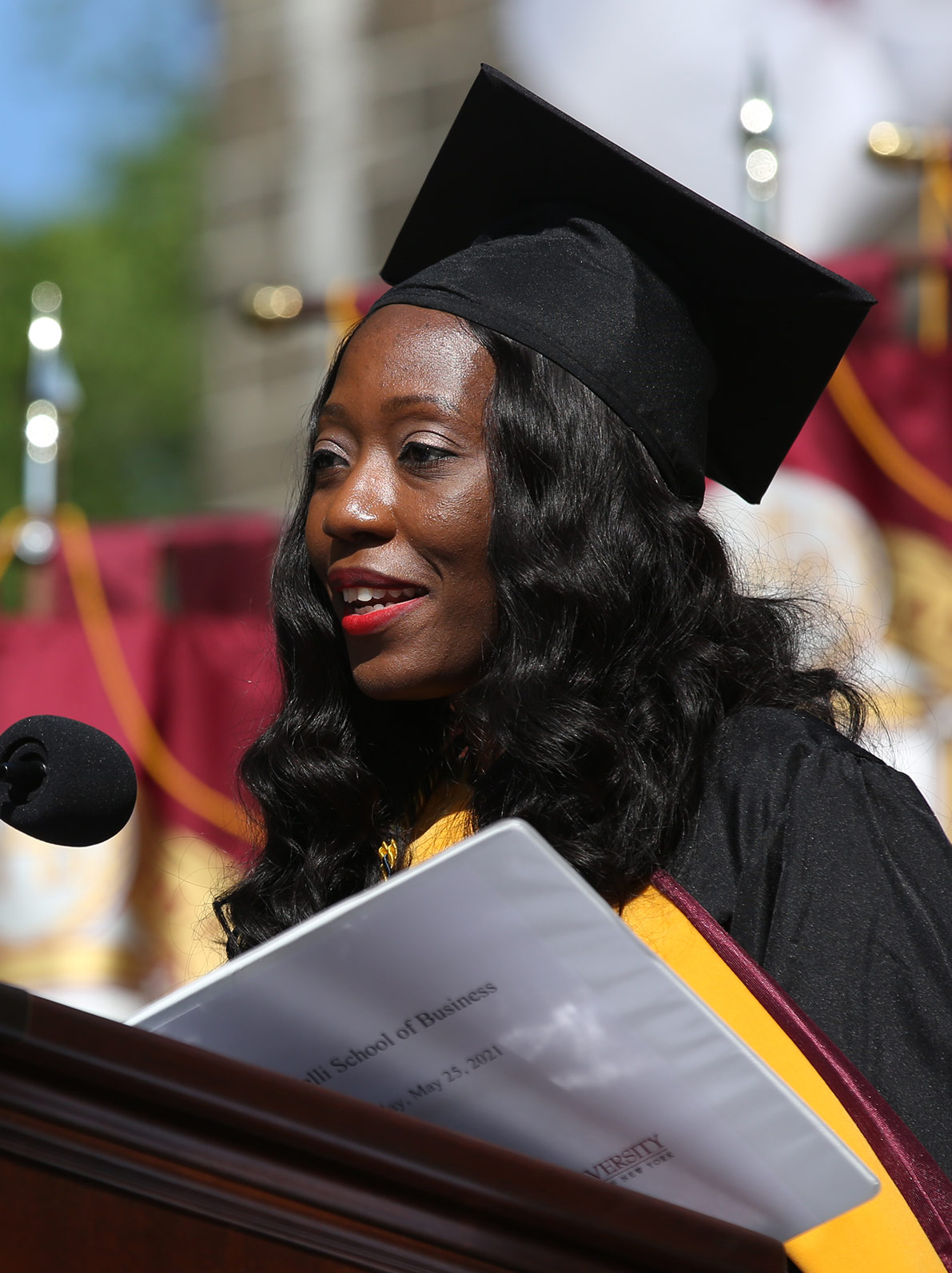 “I can remember walking through the doors of Lincoln Center for the first time, nervous and uncertain [about]what my experience will be, especially as an international student,” she said. “The warm welcome [and]smiling faces from faculty, administrators, and students quickly turned my anxiety to excitement, as I was immediately welcomed as a part of the Fordham family.

“At Gabelli, we learned the true meaning of service to others, which was built into every action, thought, and interaction,” she said. “Every day was a new opportunity to experience the spirit of Gabelli [and]see your fellow students selflessly supporting each other.”

One of those students, Joseph A. Micale, became the first graduate of the Gabelli School’s Ph.D. program. He was drawn to the program because of its rigor, among other things, and appreciated faculty members’ openness to its students’ input about additional things they wanted to study, such as machine learning and data science. 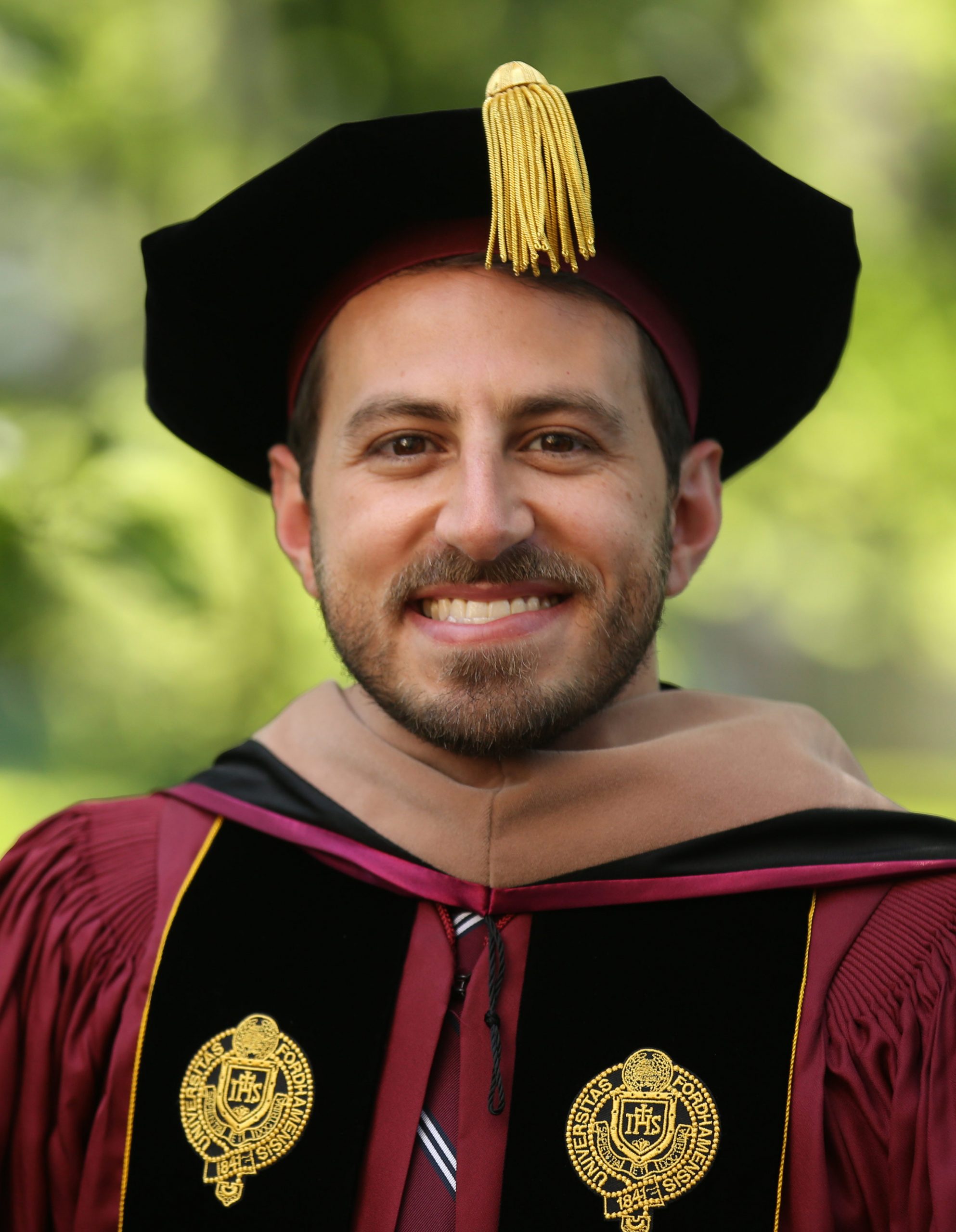 Moving on feels bittersweet, said Micale, who served as an adjunct faculty member at the Gabelli School and will be an assistant professor of accounting at the New Jersey Institute of Technology this fall.

“There’s just so many people who helped with everything,” he said. As the first graduate of the Ph.D. program, he added, “I’m just very happy … to be the first person to say ‘thank you’ to all of them. I could not have done any of this without them.”

Watch a video of the in-person diploma ceremony below and on YouTube:

Watch a video of the virtual diploma ceremony below and on YouTube: