skip to main content
Return to Fordham University
You are at:Home»Commencement»Commencement 2021»At Commencement, Celebrating a Five-Generation Fordham Legacy
Samantha McCarthy, FCRH ’19, Molly McCarthy, FCRH ’21, and their mother, Gail McCarthy, FCRH ’88, after Molly’s graduation ceremony on May 21. Photos by Kelly Kultys and courtesy of Gail McCarthy
When Mary “Molly” McCarthy graduated from Fordham last month, she joined her sister Samantha, a 2019 Fordham graduate, in extending a family legacy that touches five consecutive generations and is now more than 120 years old.

It all started with their great-great-grandfather Hugh Kelly, a financier who attended Fordham when it was still known at St. John’s College. He earned two graduate degrees from Fordham—a Master of Arts and a Doctor of Laws, in 1901 and 1902, respectively. His son-in-law John J. McLaughlin graduated from Fordham College at Rose Hill in 1919. 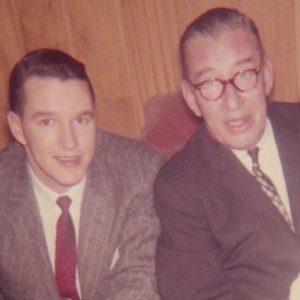 “For me, it’s the history of it, and the warmth, and the alumni—it’s such an incredible, incredible family,” Gail McCarthy said about why she and her family love Fordham. “I have a great group of friends from my class, so we come back a lot. The alumni network is incredible. Everywhere we go, there’s Fordham everywhere, which is wonderful.”

Molly and Samantha initially resisted the family tradition, Gail McCarthy said. But Molly transferred to Fordham during her sophomore year, just like her mother had done during the 1980s. And Samantha was considering another school when she came to Fordham for a Spring Preview tour after she had been admitted to the University. 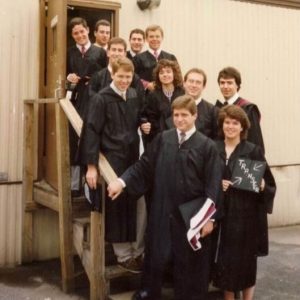 Gail McCarthy, FCRH ’88, with her friends on graduation day.

“My mom really wanted me to come to Fordham, and I was very resistant, just being difficult,” Samantha McCarthy said. But she made her decision during the tour. “I was like, ‘OK, I have to tell you something. … I want you to have no reaction, I don’t want you to freak out, but I think I’m going to come here.’ And she was like, ‘Oh my God!’ freaking out.”

Gail McCarthy said that she had talked with Joseph M. McShane, S.J., president of Fordham, while taking the tour that day. “He said, ‘What do you think so far?’ And I said, ‘You know I love it so much, but my daughter is trying to make her decision,’” McCarthy said with a laugh. “And he goes, ‘What’s to decide? She’s coming here.’ But she wasn’t! She was on the other side of the field. I’m like, ‘Well, I’m trying to be really low key about it, Father. Don’t say anything.’”

“You just don’t realize how long the University has been around till you have access to a lot of history like we do, and it’s just fun,” said Samantha McCarthy, a flier relations associate with Blade Urban Air Mobility. “It adds a real layer of legacy tradition, a real sense of community.”

Molly McCarthy, who earned a degree in political science with a minor in journalism, said she’s thinking about applying to graduate school at Fordham.

“I would love to maybe come back to do a master’s or something to get some more time at Fordham,” she said. “Just because it was so short but so sweet.”

And Gail McCarthy is already thinking about the next generation.

“It’s a great place,” she said, before adding with a smile: “Maybe some grandchildren, now that my girls are done.”