skip to main content
Return to Fordham University
You are at:Home»Fordham Magazine»Alumni News»A Long-Cherished Fordham Ring Finds a New Home on Graduation Day
Michael Mooney, FCLC ’83 poses with his daughter Caroline Mooney at her diploma ceremony. Photos by Kelly Kultys
Soon after Caroline Mooney walked across Keating steps during the Fordham College at Rose Hill diploma ceremony on May 19, she received a special gift from a fellow Fordham grad. Her father, Michael Mooney, FCLC ’83, presented her with a decades-old gold signet ring bearing the University seal.

The ring originally belonged to Eileen Clifford, O.P., a two-time Fordham graduate, longtime educator, and former vice chancellor of the Archdiocese of New York. After Sister Clifford, UGE ’69, GRE ’74, died in August 2020 at the age of 82, the director of mission advancement for the Dominican Sisters of Sparkill reached out to Fordham Trustee James P. Flaherty, FCRH ’69, to see if he could help find a home for the Catholic nun’s cherished ring. 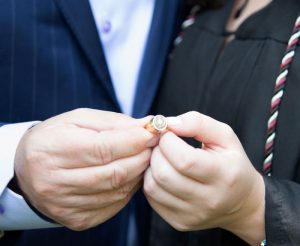 Flaherty immediately thought of his friend Michael Mooney, whose daughter would be graduating from Fordham this year.

“I was so surprised,” Caroline Mooney said, showing off the ring after the diploma ceremony. “It’s a beautiful gift, especially today—commencement is so special. This is something I can treasure for the rest of my life. It’s a statement of Fordham. I wish I knew her; I wish I got a chance to meet her. But I’m very grateful.”

A Bronx native, Clifford entered the Dominican Sisters of Sparkill in 1955 and professed her final vows in 1962. She received a bachelor’s degree at St. Thomas Aquinas College before earning two master’s degrees from Fordham, including one in educational administration and supervision. She taught at several Catholic schools across New York before serving for 14 years as principal of Monsignor Scanlan High School in the Bronx. She became associate vicar for education for the Archdiocese of New York in 1993, and in 2002 was appointed vice chancellor, a position she held until her retirement last year.

Michael Mooney said that because the ring and Fordham meant so much to Sister Clifford, he gladly accepted it from the Dominican Sisters last fall. He made a donation to the order in her memory around Easter and decided to give the ring to his daughter at Rose Hill—although he wasn’t sure when he’d be able to do that.

“I put it in my safe and said to my wife, ‘Look, because of COVID, we don’t even know if they’re going to have any kind of in-person graduation ceremony, but maybe we’ll do it on campus,” he said.

When Fordham announced in April that guests would be allowed to attend some in-person diploma ceremonies, in keeping with New York state guidelines, Mooney knew that he could put his plan into action. 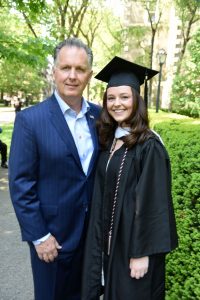 “Today was nice,” he said of the May 19 ceremony, which was limited to 1,000 attendees. “When they made the alumni [in the audience]stand up [to be recognized], that was awesome. And this was more intimate—something different that COVID brought.”

Caroline Mooney said that she was grateful to her professors and Fordham staff members for helping students get through the challenges of the past year, particularly at the Fordham London campus, where she was studying in March 2020.

“The New York campuses went home before us, and then we had to go home and resume things over virtual learning,” she said. “But the professors all came together so quickly and did a great job. It was as difficult for them as it was for us. I’m just very appreciative of everyone here.”

Graduating from Fordham is “bittersweet,” said Caroline, who earned a degree in communications with a minor in marketing. But she’s excited about her next stop: working as an account coordinator for Coyne PR in Parsippany, New Jersey.

And she plans to keep Sister Clifford’s old ring close, although she might decide to wear it on a necklace.

“She had such dainty fingers!” Caroline said with a smile.