skip to main content
Return to Fordham University
You are at:Home»Commencement»Commencement 2020»Students and Alumni Win National and International Awards

Despite the unprecedented global health crisis scholars are facing this year, the Fordham community has good reason to celebrate.

Every year, students apply for these competitive awards with the help of Fordham’s St. Edmund Campion Institute for the Advancement of Intellectual Excellence and Office of Prestigious Fellowships. These experiences often shape students’ career paths and strengthen their international perspective. This year, many programs have temporarily postponed participation due to COVID-19; others have developed remote options.

“I feel tremendous pride in the achievements of our students who, with the assistance of the Campion staff and the generosity of the Fordham faculty, have brought great honor to the University during a most difficult and trying period,” said John Ryle Kezel, Ph.D., director of the Campion Institute. 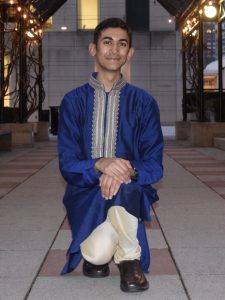 Joshua Somrah, FCLC ’20, an international studies and political science double major and an anthropology and theology double minor, won a Fulbright English teaching assistantship to India. He’ll begin the nine-month program in June 2021—a year later than originally planned, due to the pandemic.

“I wanted to go there because of my family heritage. My dad is Guyanese, and my mom is Trinidadian, but our ancestors are from India. Because of colonization, my ancestors were brought from India to the Caribbean to work as indentured servants, but Indian culture is still a big part of our family today,” said Somrah, who now lives in Long Island with his family. This will be his first trip to India. “I wanted to go to the place where it all started.”

Someday, Somrah hopes to become a U.S. diplomat for the United Nations or a similar organization. He will begin a master’s program in government and politics at St. John’s University next month, starting with remote classes and hopefully transitioning to in-person classes in the fall.

In the meantime, Somrah is still excited about his 2021 trip to India. He said he loves watching Bollywood movies and has been teaching himself Hindi by watching videos and Googling unfamiliar words. He has traveled to Brazil and Cuba through Fordham’s Global Outreach trips, but he’s ready to experience a new, yet familiar culture.

The last time his family lived on the subcontinent was nearly two centuries ago, he said.

“I want to learn from the people there, just as much as I’ll be teaching them,” Somrah said. 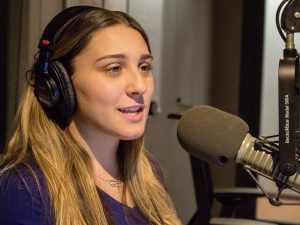 Her collaborative project “Bronx Connections: When Gun Violence Becomes Personal,” produced by WFUV in partnership with The Norwood News and BronxNet Television, won for outstanding public affairs program or series in two categories from the New York State Broadcasters Association. The five-part series explores how gun violence has impacted the Bronx community.

“I talked to one person who was on the other end of a gun, who pulled the trigger. I spoke to one person whose brother actually died from gun violence in his neighborhood … And I talked to another woman who actually became an activist after her 4-year-old grandson got shot in the elbow and survived,” said Migliore. “What I learned from this series is when something impacts your life, and you’re that passionate about it, you can change the community, and you can change the way people think about it.”

Migliore said she caught the “news bug” when she joined WFUV in her first semester at Fordham. She steadily moved through the ranks, from reporter to news anchor to newsroom student manager. What she loves most about journalism is connecting with people, she said—especially when communities trust her to tell their stories.

Like many graduating seniors, Migliore is now searching for a job. She says it’s been difficult in the midst of the pandemic, thanks to the hiring freezes at many news organizations across the country. But she’s reporting for WFUV until the end of the semester and writing stories on how COVID-19 is affecting local businesses, health care workers, and college students like herself. And no matter where her career takes her, she wants to continue being a reporter.

“That’s what all the stories I’ve covered have given me the privilege of seeing,” said Migliore. “I can see through people’s eyes. And I love that.” 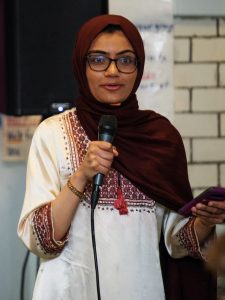 Aamnah Khan, FCLC ’20, a humanitarian studies major and peace and justice studies minor, won a Coro Fellowship in Public Affairs. Starting this October, she will participate in projects across multiple sectors in public affairs in New York City. The nine-month fellowship will culminate in a final independent project.

“I’m excited to get an overview of what our city’s programming looks like and the politics behind it,” said Khan, a Pakistani-American Muslim from Kensington, Brooklyn. “As we continue to move on to the next phase of this pandemic, [I’m sure we’ll see] the effects it’ll have on our city, including the upcoming local 2021 elections.”

Khan hopes to become a human rights lawyer for a non-profit organization. She said she especially wants to support survivors of domestic violence, sexual assault, and intergenerational trauma.

What fuels her desire to help other people is her family’s own experience with racial discrimination. In the aftermath of 9/11, her father was targeted for his cultural attire. Her extended family has experienced racism, too.

“During the 2016 presidential elections, my family—my extended family in Ohio—were victims of hate incidents. They [experienced]vandalism. They had an attempted shooting at their mosque,” Khan said. “Because of that, I vowed to never stop fighting for their rights, to stand in solidarity with the rest of the world, and to question when humanity is no longer being preserved.”

As of May 11, prestigious awards received this year include:

Additional awards are still being announced.