skip to main content
Return to Fordham University
You are at:Home»Commencement»Commencement 2020»Celebrating Fordham’s 175th Commencement: Together in Spirit
Father Michael “Mick” McCarthy, vice president for mission integration and planning, gives the benediction at the videocast commencement ceremony, which graduates and their families could watch at home.
While Edwards Parade wasn’t filled with thousands of graduates and their families on Saturday, Joseph M. McShane, S.J., president of Fordham, said when he looked out over the lawn, he could feel each one of them.

“When I look at Edwards Parade, I see it very differently than the way that you do,” he said, speaking from the Terrace of the Presidents during the videocast 175th Commencement ceremony. “As I gaze out on it, it is packed to overflowing, with you, the members of the Class of 2020, and the throngs of fans who gathered to hail and to toast you. So my dear friends, welcome home.”

Though the coronavirus pandemic made it necessary to postpone the traditional pomp and circumstance, Fordham’s video webcast of the 175th Commencement recognized more than 5,500 graduates, many of whom celebrated in their own homes while tuning in. The University plans to hold an in-person Commencement on campus when public health officials and the governor deem it safe to do so.

Christopher Largey, GABELLI ’20, poses next to a Fordham sign following the videocast ceremony. Courtesy of Largey.

During the ceremony, the deans of each of Fordham’s schools and colleges, dressed in their traditional academic robes and participating from their own homes, presented their candidates for graduation to Father McShane, who officially conferred their degrees. Each school also set up a recognition page with audio slides for all of the graduates—some of which contained photos and personal messages. Fordham Law held a virtual diploma ceremony on Monday; the graduate division of the Gabelli School of Business will hold one on Tuesday.

A Longing to Be Together

The Class of 2020 was always a unique class, Father McShane said, but what they’ve had to face in the last three months truly sets them apart.

“You are a class that has been tried and tested as no other class in our history has been,” he said. “Three months ago, your final semester Fordham, a semester that should have been a joyous and carefree victory lap, was disrupted. Your world was turned completely upside down. Innocent pleasures vanished overnight. You experienced the loss of sacred memories with your friends, and understandably, you mourned.” 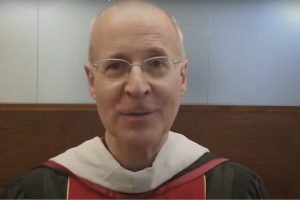 James Martin, S.J., received an honorary degree and spoke at the videocast of Fordham’s Baccalaureate Mass.

At the Baccalaureate Mass on Friday night—also presented via videocast—James Martin, S.J., editor-at-large of America magazine, said that these feelings of mourning were natural. Participating from his home, Martin received an honorary doctorate of humane letters and served as homilist at the Mass, which was celebrated in the University Church and featured a Zoom choir performance with students singing from their respective locations.

In thinking about the Class of 2020, Father Martin said, he was reminded of the Gospel passage about the Road to Emmaus. Two disciples were walking along the road, and before the resurrected Jesus joined them, they uttered what Martin called the saddest words in the New Testament—“we had hoped.”

Still, Martin urged the graduates to remember that they were not on this journey alone.

“Even amidst the sadness, confusion, and fear, God is on your side,” Martin said. “When you think about your future right now—figuring out what to do, looking for a job, mapping out your life, remembering that it’s not just you struggling on your own, know God is with you.” 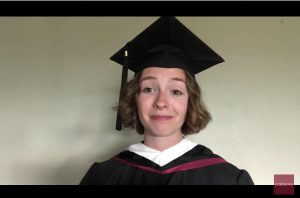 Rosemarie McCormack was the valedictorian for the Fordham College at Rose Hill Class of 2020.

Fordham College at Rose Hill valedictorian Rosemarie McCormack, FCRH ’20, said that the day was full of ironies for her, particularly since she had worked at previous commencement ceremonies as a student.

“But the bittersweet ceremonies today are a testament to something special about Fordham,” said McCormack, speaking from her home in Missoula, Montana. “We are a community. We only miss each other because there is something to miss.”

It’s that ability to try and find the bright side that gives the Class of 2020, dubbed both the dodransbicentennial class and the visionary class by Father McShane, another attribute to their names, according to Kaylee Wong, GABELLI ’20.

“When we arrived on campus back in 2016, Father McShane called us, the Class of 2020, ‘the visionary class,’ but in the past few months we have learned we are more than that,” she said in a video to her classmates. “We are the resilient class.” 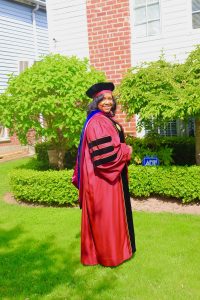 Sophia O. Cohall received her second Fordham degree as a member of the Class of 2020—a Ph.D. in educational leadership from the Graduate School of Education. Contributed photo

Father McShane echoed that sentiment and said the class, which had to move back home and finish their semester online, had learned a new set of lessons.

Michele Kalt, a new graduate of the Graduate School of Social Service, said that the Class of 2020 was uniquely prepared to handle this challenge.

“I find great comfort knowing that you, my fellow classmates, will be dispatched as torchbearers of hope and beacons of light in a world that needs us now more than ever,” she said in a video speech to her classmates.

Hayley Williams, FCLC ’20, said in a video message just after the Baccalaureate Mass that she had been trying over the last few weeks in quarantine to handle feeling helpless and apathetic.

“My actions seem to impact little outside of my own home,” she said.

This left her thinking, “after four years at Fordham, what did I gain? Where is my purpose in this?”

Williams said that a sentence from Father McShane kept coming back to her—“Fordham students will leave being bothered.” 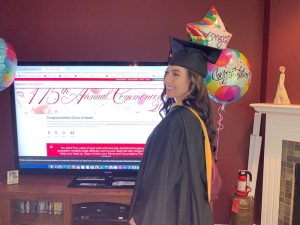 Francesca Cinque, a member of the Class of 2020 of Fordham College at Rose Hill, poses for a picture with the videocast ceremony playing at home. Contributed photo

“Simple, yes, but this is the most valuable lesson I learned in college,” she said. “Fordham asked me to be a woman for others. I could not be a Fordham student and be numb to the needs of my city, my community … With all the hurt and disappointment and loss plaguing our world, I cannot let myself be unbothered by it. We cannot let ourselves be unbothered.”

It’s these lessons learned by graduates, both over the course of their time at Fordham, but in particular, over the last three months, that can help shape them into men and women for others, Father McShane said.

“Never forget the hard, necessary, and saving lessons that you have learned in the course of the past three difficult months,” he said. “Shape the world’s future with and through them. Teach these lessons to others, not by preaching about them, but by living by them and living them. Live heroically. Live with bold and infectious love. For this, my dear friends, this is your special burden, your mission, and your pride.” 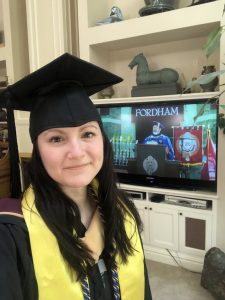 In their reflections before the Baccalaureate Mass, students Joseph Papeo, FCRH ’20, and Emma Quinn, FCLC ’20, said that although the Class of 2020 is separated right now, they will always be connected by their Fordham roots.

“This celebration reminds us that no matter where life may find us, we are united by our memories and our experiences as Fordham students,” Papeo said.

Most of all, Papeo urged his classmates to be prepared to embrace the values Fordham taught them as they approach the next phase of their journey.

“As we’ve heard so many times before, but need to hear now more than ever, let us all go out, when it’s safe, and set the world on fire,” he said.