skip to main content
Return to Fordham University
You are at:Home»Colleges and Schools»At Encaenia, Pomp and Frivolity Embraced in Equal Measure
Let love guide you in becoming true men and women for and with others, Maura Mast, Ph.D. Dean of Fordham College at Rose Hill, told students
Accolades and jokes took centerstage at the Rose Hill Gym on May 17, as graduating members of Fordham College at Rose Hill gathered to celebrate academic accomplishments at the annual Encaenia ceremony.

Film and television major Colleen Granberg was tasked with lightening the mood as the 2018 Lady of the Manor. In a speech peppered with jabs at food, dorm life and WiFi service, she compared Encaenia to the Oscars, because it’s an honor just to be invited.

“Or at least, that is what you will tell your parents later tonight when they ask you why exactly you did not receive any prizes tonight,” she joked. 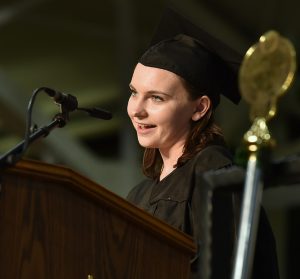 Lady of the Manor Colleen Granberg

Some of the biggest laughs came from Granberg’s observation that the University’s severe weather alerts seem to always note that the Lincoln Center and Rose Hill campuses will be open, but that the Louis Calder Center is closed.

“I don’t know where exactly the Calder Center is, but it must have the most dangerous weather conditions of all time. It’s like one of those towns in rural Alabama that doesn’t have any plows so when it snows like, half an inch, they have to shut down the whole city, except it’s in Westchester,” she said, poking fun at Fordham’s biological field station, which is located 25 miles north of the city.

“I have been let down too many times by those emails. I kind of want to go to the Calder Center just to see what’s happening there, but now I’m too spiteful. I wish everyone at the Calder Center well, but our relationship is beyond repair.”

Valedictorian Mimi Sillings, a psychology major who commuted from Pleasantville for four years, joked that ‘Fordham is my school. Metro-North is my campus.’ She implored her classmates to appreciate that the “good old days” are actually now.

Sillings said she stumbled badly in a class her first semester, but when her mother gave her a necklace that said “This too shall pass,” Sillings said it became a talisman that provided her with a surprising source of strength. At some point, it broke.

“With sadness, I presented it to her. But my mom smiled. I was taken aback. She said, ‘Don’t you see, Mimi? You don’t need the necklace anymore.’ She was right, as moms often are,” she said. 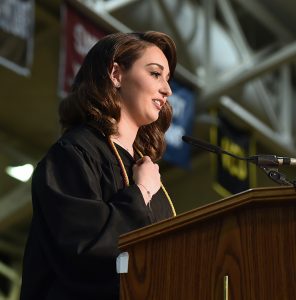 Maura Mast, Ph.D., dean of Fordham College at Rose Hill, told students that because they’d finished classes but have not yet graduated, they were in “a thin place” –where two worlds come together and are both seen and unseen.

“In Celtic spirituality, a thin place is where the ‘distance between heaven and earth collapses,’ a sacred place where you can feel the transcendence and the immanence of God,” she said.

“It can be confusing and unsettling to be in a thin place, but it can also be transformative: This experience can jolt you to see yourself—and the world—in a new way.”

It’s a good time she said, to reconsider what it means to “become men and women for others. It is not about being nice, nor is it a feel-good marketing slogan or a form of secular social activism,” she said.

“As men and women for others, you are called to be present to and in solidarity with others; in fact, to see them not as ‘others’ who need your help but as people, as individuals, as children of God; and through this shift in focus, you see God,” she said.

If it seems overwhelming, she said, consider two pieces of advice: Do something very well, even if it’s small, that will bring about positive change, and let God’s grace enter and do the rest. And, she said, fall in love. 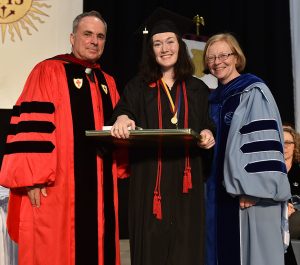 “I ask you to fall in love, to stay in love, to act with love, and to let love guide you in becoming true men and women for and with others,” she said.

Mast presented two students with special awards. The Claver Award, which is granted by the Jesuits of Fordham to a senior who best represents Fordham’s dedication to community service, was given to Meghan Townsend, who spent almost a year living at St. Joseph House, the soup kitchen and homeless shelter founded by Catholic activist Dorothy Day.

The Fordham College Alumni Association Award, which recognizes a senior who embodies the “Fordham spirit,” was awarded to Erin Shanahan, whom Dean Mast praised for her leadership at the student-run newspaper The Ram.

“In a period marked by the rise of fake news and increasing incivility in both our public life and on college campuses, The Ram under her leadership and guidance strove to uphold high standards of fact-based journalism, took on difficult and controversial issues with skill and nuance, and encouraged a campus atmosphere of civility and dialogue,” she said. 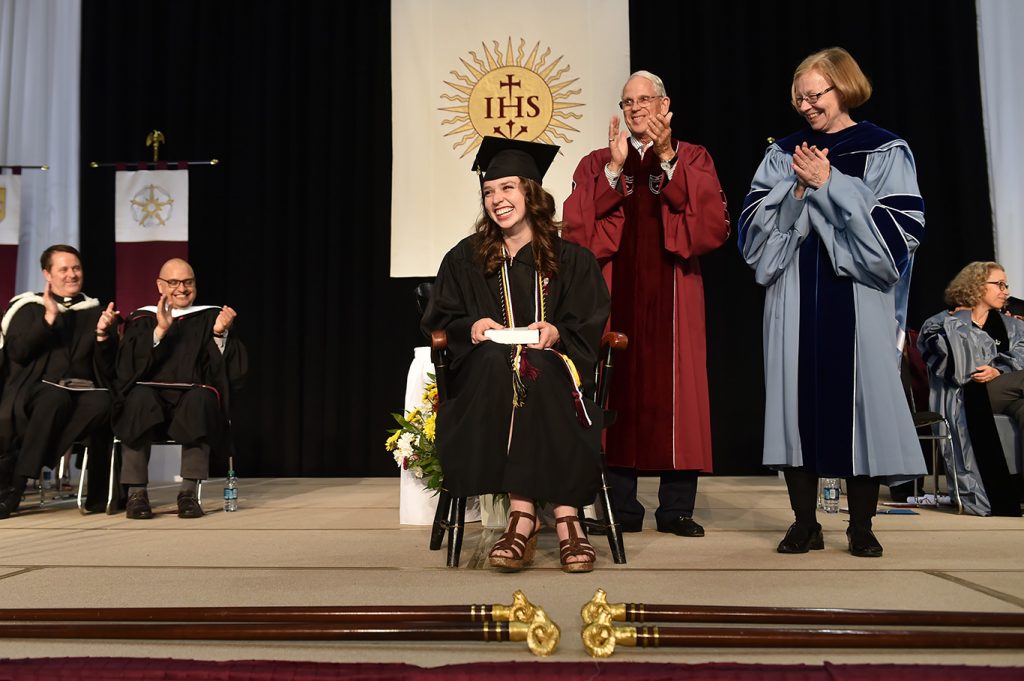