skip to main content
Return to Fordham University
You are at:Home»Commencement»Special Olympics Chair Timothy Shriver to Address Class of 2019

Timothy Shriver, Ph.D., chairman of the Special Olympics, will deliver the keynote address to the Class of 2019 at Fordham’s 174th Annual Commencement on May 18. Shriver will receive an honorary doctorate of humane letters from the University.

“Fordham University is proud to confer an honorary doctorate upon Timothy Shriver,” said Joseph M. McShane, S.J., president of the University. “If Fordham were only considering Dr. Shriver’s many accomplishments in education, childhood development, and special athletics, they would be more than enough to merit the honor. In conferring this degree, however, we also acknowledge a man who could have chosen any path in life but elected to devote himself to the welfare of society’s most vulnerable members. In this, Dr. Shriver exemplifies the highest of Fordham’s ideals and the best in all of us.”

An educator, author, and activist for social change, Shriver has spent his career working for the dignity and fulfillment of young people. In 1996, he joined the Special Olympics, founded by his mother, Eunice Kennedy Shriver, when he was a child. Under his leadership, it has become a beloved global organization that promotes health and education through sports, supporting more than 5 million athletes with physical and developmental disabilities who take part in over 100,000 annual competitions.

Earlier in his career, Shriver worked as a teacher in the New Haven, Connecticut, public schools, where he helped establish social and emotional education programs in an area plagued by violence and drugs. During a visit to Fordham in 2016, he talked about the importance of mindfulness at a time when so many young people are facing anxiety and depression. 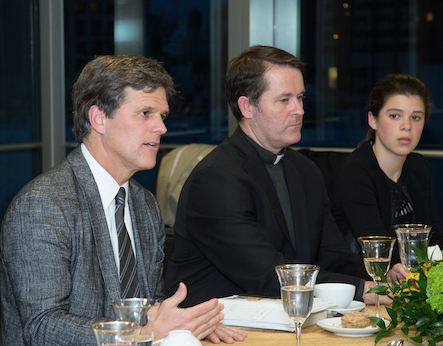 “The silence that has come to us from contemplative practice can be . . . a source of direct experience of one’s goodness,” he said.

“The primary vector of discovery is of your own self-judgment. And when you finally start to unmask your own judgment, you get to the point where you can see a little more clearly.”

Shriver was a producer on four films including the 1997 Steven Spielberg film Amistad. His 2014 book, Fully Alive: Discovering What Matters Most, recounts his personal spiritual journey and vision of inclusivity.

Through its own commitment to service and education, Fordham shares many connections to Shriver and his family. The University ranks among schools that produce the most volunteers for the Peace Corps, originally led by his father, Sargent Shriver, who received an honorary doctorate at Fordham’s 1963 commencement. His son Tim has served as president of the Jesuit Volunteer Corps, where many Fordham students volunteer after graduation. And his daughter Caroline graduates this May as a member of the Fordham College at Lincoln Center Class of 2019 with an Ailey/Fordham B.F.A. in dance.

Six other notable figures will receive honorary degrees at commencement. Fordham will grant a doctorate of humane letters to Ellen R. Alemany, chairwoman and CEO of CIT Group and CEO of CIT Bank, N.A.; Bob Casey, U.S. senator from Pennsylvania; Yueh C. Chen, secretary of the J. T. Tai & Company Foundation; Joseph P. Parkes, S.J., provincial assistant for secondary and pre-secondary education for the Maryland and USA Northeast Provinces of the Society of Jesus and a former Fordham trustee; and David Ushery, NBC News 4 New York news anchor and reporter. Alemany will be the speaker at the diploma ceremony for Gabelli School of Business master’s degree candidates on May 20. The Honorable Pamela K. Chen, United States District Court judge for the Eastern District of New York, will receive an honorary doctorate of laws and will speak at Fordham Law School’s diploma ceremony on May 20.