skip to main content
Return to Fordham University
You are at:Home»Commencement»Commencement 2019»Rogie Castellano, GRE ’19: The Evolution of A Passionist Priest
Photos by Taylor Ha
When Rogie Castellano was five years old, he lived in a home with little to no electricity or clean water on the outskirts of Manila, Philippines. But he was comforted by priests from his local parish, who offered words of encouragement and inspiration to his community.

He became drawn to the little church building near his home. Castellano prayed the rosary, sang in the parish choir, and joined the youth ministry. By the time he reached high school, his life began to revolve around three places: home, school, and the church.

Then one day, a thought occurred to him:

“I started loving being in the church,” Castellano said, waving a hand that holds a silver devotional ring—an early gift from a fellow Passionist priest. “Before graduating from high school, I asked myself: ‘What if I consider life in the priesthood?’”

The Path to Priesthood

Today, Castellano is a 41-year-old priest of the Passionists of St. Paul of the Cross Province, an order found in more than 50 countries worldwide.

At age 28, he became ordained as a priest and, later, a vocation director: a person who helps and guides those who are discerning their vocation in the church. Over the next decade, he journeyed across the country, recruiting future priests and shepherding young seminarians to priesthood. But in his travels, he also witnessed things that could hurt the psychology of a potential priest—deep-seated poverty and “broken” families—particularly in Manila.

“Where he works in the Philippines is one of the poorest, most vulnerable communities in urban Manila,” said Faustino “Tito” Cruz, S.M., dean of the Graduate School of Religion and Religious Education, who was born and raised in the capital city.

There are only two places in the world where divorce is illegal: Vatican City and the Philippines. This has led to the development of “second families,” Castellano explained—conglomerate families of informal stepparents, illegitimate children, and, often times, difficult childhoods.

He recalled a young seminarian who grew up in a “second family.” Life in the seminary was difficult for the young man. He disobeyed his superiors and left the seminary at night when he wasn’t allowed to.

“Families play an important role in vocation formation. If a child witnesses brokenness or infidelity in the family, that affects the child,” Castellano said.

Redefining the Taboo Behind Mental Illness

In the summer of 2017, Castellano moved to the U.S. and started school at the Graduate School of Religion and Religious Education. Over two years, he completed 60 credits’ worth of coursework.

“There’s a warm and generous spirit about him,” said Kirk Bingaman, Ph.D., who taught Castellano in the Theology of Pastoral Counseling and Spiritual Care class last fall. “He’s able to explore things comprehensively and in depth … He really had a compassionate approach to his work.”

One of Castellano’s most challenging classes was Psychopathology and Diagnosis, a course designed to help students understand mental disorder diagnosis and treatment. He said it reshaped his understanding of mental health treatment, which is widely seen as a cultural taboo in Asia.

“For Filipinos, if we have problems, we just go to the karaoke bar,” he said, letting out a short laugh. “Our country is bombarded with a lot of manmade and natural calamities. If we have floods in the Philippines, like up to this,” he said, standing up and gesturing below his chin, “we would just enjoy swimming.”

Treatment for mental health issues, he said, is especially stigmatized.

“It’s the last resort of our problems,” Castellano said. “When you go to a counselor or psychotherapist, people will tell you, ‘Are you crazy? Like, can’t you handle your life?’”

What he learned as a young man heavily shaped the way he viewed people with mental health disorders. For years, it was difficult to understand and sympathize with them—including some of the young seminarians in his care. But his time at Fordham changed his attitude.

“A person is always more than their diagnosis,” he said. “The client is a person … There is always this chance for each and every one of us to have that process of healing.”

Paving a New Path in the Philippines

At Fordham, he learned to love Rose Hill’s Gothic buildings and the small, tight-knit community at GRE. He met people who were neither Catholic nor Filipino—men and women from countries as far as Croatia, the Solomon Islands, and Ecuador.

And because Castellano’s student cohort was so small—less than 10 people—he was able to bond with each of them. He recalled the day they walked to Arthur Avenue for some chit-chat and a couple of beers. He also remembered when he connected with Kate Hoover, a Buddhist classmate, who taught him a different way of life.

“I’m amazed at how we tolerate, and how we’ve become so respectful of each other’s faiths,” Castellano said. “And how we decide to love our own faith and at the same time, be open to knowing God in different perspectives.”

In a few months, he will return home to the Philippines. Castellano plans on using his newfound skills to help him better serve his community, the church, and God. He sees himself counseling young men wrestling with emotional turmoil and the priesthood, and even helping some seminarians realize that they aren’t destined for the priesthood after all. In the future, he might obtain his doctorate in ministry.

But for now, he hopes his GRE training will especially help the young students under his wing.

“That would be a great fulfillment for me,” Castellano said. “To see a seminarian who’s undergone counseling and was able to get over, or at least manage, his issues and become a successful priest.” 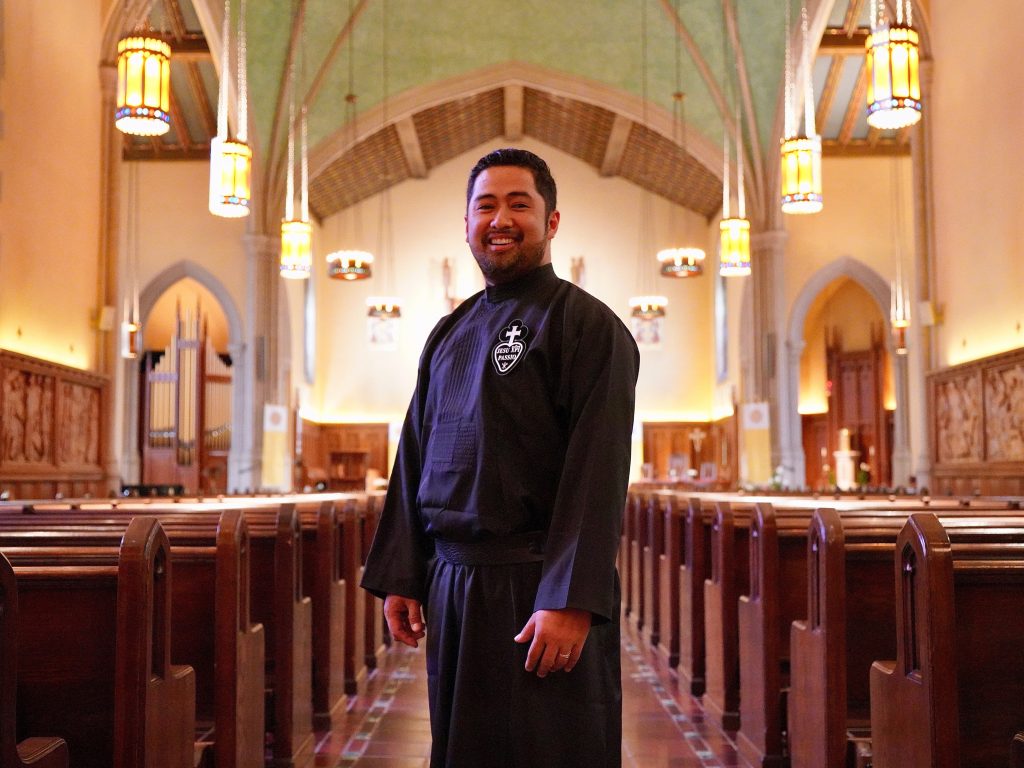 Castellano at the University Church on Rose Hill campus