skip to main content
Return to Fordham University
You are at:Home»Commencement»Commencement 2018»Class of 2018 Called to Lead Nation toward a ‘More Perfect Union’
Dennis Walcott addresses the Class of 2018 at Fordham’s 173rd Commencement. Photo by Chris Taggart
Holding on to the values that inspire unity in this age of polarization might seem like a tall order. But former New York City schools chancellor Dennis Walcott is confident that the Class of 2018 is poised to create “a more respectful, more equitable, and more thoughtful world.”

Walcott, who currently serves as president and CEO of the Queens Library, addressed more than 3,000 members of the Class of 2018 on May 19 at Fordham University’s 173rd Commencement, held on the Rose Hill campus.

Speaking in the Lombardi Center during the ceremony, which was moved indoors due to the rain, Walcott noted that millennials will outnumber Baby Boomers in 2019 as the nation’s largest generation. And he pointedly told graduates that with this imminent shift comes great responsibility.

“As members of a community that strives to educate its students to recognize the whole person, to work to achieve social justice, and to serve others, you are well positioned to make sure that we listen,” he said, noting that the graduates have already begun creating positive change. He cited examples from their Fordham careers, from leadership opportunities in clubs and organizations that improve the lives of others to stewarding $1 million of the University’s endowment in the Student Managed Investment Fund. “I would even go so far as to say that in light of the privileges which Fordham has endowed you,” he said, “it is your obligation to get us there.”

Walcott, who received the President’s Medal from Joseph M. McShane, S.J., president of Fordham, shared his memories of taking late-night courses at GSS in the ’70s after working all day. He recalled waiting on the outdoor platform in the dead of winter for the No. 7 train at Queensborough Plaza. During moments like this, he’d often ponder his future. After recognizing that someone might be going through a more difficult time and could one day benefit from the knowledge he was gaining, he was further determined to succeed.

“The same holds true for every one of you graduating today,” he said. “Fordham has educated you to be people for others and people who lead lives of service to others. As you continue to learn, work, and grow, you will be changing people’s lives and shaping our world for the better. No matter what career you decide to choose, we are counting on you.”

Father McShane, whom Walcott commended for his leadership in an era of “unprecedented tension and distrust,” described commencement as a golden day for the Class of 2018. He urged them to be active participants in our history.

“Through it all, you have come to understand that no one can any longer stand on the sidelines of history as a disinterested observer,” he said. “Sidelines no longer exist. The raw, immediate flow, force, and power of history ‎engulf all of us and challenge us to us try to make sense of things, and to respond to all that is unfolding around us.”

Father McShane also encouraged graduates to the use the lessons they’ve learned at home and Fordham as their compass. 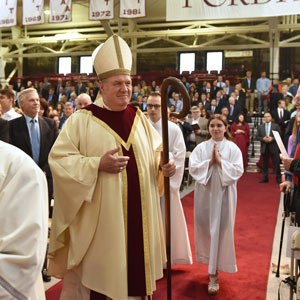 Cardinal Joseph W. Tobin, C.Ss.R., received an honorary doctorate of ministry at the Rose Hill Baccalaureate Mass on May 18.

“If you are attentive, compassionate, and passionate citizens of the world eager to do the world a world of good, if you are men and women for others, you will truly be every day what you are called to be,” he said. “If you do all of this, the history you will make will be a history that is marked by justice, by equality, by love and by great, great commitment.”

A Day of Celebration

Despite the steady rain and cloudy skies, graduates found special ways to celebrate their accomplishment across campus.  Some graduates danced playfully in the rain as they waited for the start of the procession.

Others graduates like Manny Linares, a groundskeeper at Fordham’s Rose Hill campus, celebrated the end of their academic road and the start of a new journey with their families cheering them on. 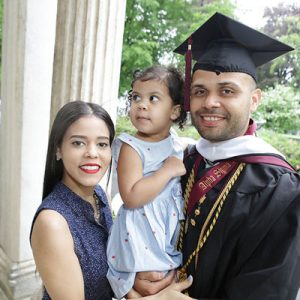 PCS graduate Manny Linares with his wife and daughter

“It’s a little surreal,” said Linares, who received a bachelor’s degree in organizational leadership from the School of Professional and Continuing Studies. “It has yet to really hit me, but it’s a long time coming.”

As a working student with a three-year-old daughter, Linares said his professors and advisers played a role in helping him to acomplish this feat.

“I always wanted to get a degree, but I didn’t think it was something that was within reach until I arrived at Fordham,” said Linares, a first-generation graduate, who was recently admitted in the Masters of Science program in health administration. 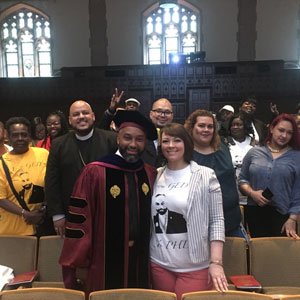 GRE doctoral graduate Emilio Alvarez with his family and friends

Emilio Alvarez, Ph.D., said he is excited to be a source of encouragement to those who face struggles similar to his own. After becoming an emancipated minor at 15 years old and receiving his GED in his early 20s, he received his doctorate in religious education today from the Graduate School of Religion and Religious Education. He’s serving as a chaplain at a federal detention facility in Batavia, New York.

“I’m grateful,” said Alvarez, whose family donned t-shirts with the words, “From GED to Ph.D.” on them. “As much as I understand that this is an accomplishment, I hope to look beyond that and see it as an inspiration to others.”