skip to main content
Return to Fordham University
You are at:Home»Business and Economics»Student Veteran Takes Lessons from Philosophy and Business to Run Bison Farm
Photos by Gordon Penn
On a recent visit to Martino Hall on the Lincoln Center campus, Jason Aubin sported a full beard, wore a Carhartt jacket, and sipped hot chocolate from a paper cup. While his outward appearance might look as though he just stepped off a farm (which he did), the southern drawl of his formal salutations made it difficult to determine whether his impeccable manners spring from his Southern upbringing or his military training.

What one might not discern at first glance is that this School of Professional and Continuing Studies senior has been in close proximity to the nation’s seat of power for the past several years, and then chose to walk away and move to the country to raise bison.

Aubin makes a weekly trek down to New York City from his bison farm outside of Cooperstown, New York, to take classes on Wednesdays and Thursdays at Lincoln Center. He bought the farm a year ago and, outside of a hired staff of one, he pretty much runs the place himself.

But not too long ago, Aubin was living a different life. An infantryman in the U.S. Army, he served as a military escort to President Barack Obama. Later he would work on a U.S. Senate campaign, two House races, and most notably Donald Trump’s presidential campaign. This was all after serving a 15-month tour of duty in Iraq.

Like so many military veterans who come to Fordham, Aubin found out about the University through a fellow veteran, Gordon Penn, PCS ’15. He said that at the time, he was examining his burgeoning career in politics from a very rational perspective, and he didn’t like what he saw.

“I looked at it as, people on both sides, regardless of what candidate they were working for or what their angle was, it was all about them. It was not for the greater good,” he said. “And I saw a lot of selfishness, a lot of arrogance, and, quite frankly, it just wasn’t a field I wanted to stay in.” 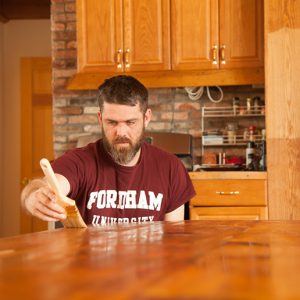 Aubin puts the finishing touches in his new kitchen.

He said that he knew that there would be a lot of hard work ahead for him, but he also knew that “a degree from Fordham means something.” He said that his background in the military and politics made him home in on the organizational leadership program. He wasn’t sure what he was going to do going forward, but he did know that he would eventually have to market himself in a way that would fit into a variety of professions. But along the academic way, he got pulled in unexpected directions.

“I came to a lot of realizations personally and lot of it has had to do with the classes I’ve had to take in philosophy, ethics, and business,” he said. “I honestly did not know what philosophy meant before I had to take the classes.”

Aubin said that he thinks that veterans, particularly those who have served in combat roles, understand that “without ethics and a sound foundation, you open yourself up to all kinds of disasters in life.”

“The most profound thing I’ve learned at Fordham was a short story I had to read in Father [Mark] Burke’s class, and it’s called The Allegory of Cave,” he said, referencing Plato’s famous work.

“There are two men chained in a cave and all they see are shadows of what’s outside, and that’s how we go through life,” he said. “And I think that either you’re gonna step out into the light and do what’s right and what’s positive. Or you’re going to stay a slave to immorality and not having any drive. And it slowly steals your will to live. So that’s why I went with what I went with.”

Aubin clearly chose to step outside of the cave, back into the greater outdoors. He grew up on a dairy farm in North Carolina, so he was no stranger to nature and farming. As an infantryman, he said, he focused on self-reliance as well as teamwork. And at Fordham, he learned the need to prioritize and not overcomplicate matters.

He knew from his own experience that dairy farming is not as sustainable a business as it used to be, since large corporations are buying up many of the country’s dairy farms. He also knew that many of America’s farmers are entering their senior years. But one niche that would be suitable for traditional small farming was in specialty products, like bison, he said.

“The farm that I took over is organic, which is the way I wanted to go. I didn’t wanna use drugs, hormones. I didn’t wanna do a feedlot. I just wanted to give people a natural product,” he said. “Plus, it’s rare to find a bison farmer; they do pretty well.”

He noted that every year the price of bison goes up. And he’s taken the “don’t overcomplicate” mantra to heart when it comes to marketing his product.

“Since I’ve bought the farm, I’ve just been knocking on doors for meat distributors in Brooklyn, in the Williamsburg area neighborhood, and the barbecue restaurants,” he said. “I’ve had nothing but a positive response for being an organic, grass-fed bison operator.”

He said that he struck a deal with the former owner of the farm, who put his life’s labor into the cattle and didn’t want to see the place disappear.

“It’s just been a true blessing. I got a house out of the deal. I got 340 acres that are mine. I lease another 200 for hay production. And I have a herd of 89 bison with 30 calves due to be born in the spring.”

He said the Cooperstown area, home to the Baseball Hall of Fame, is also a great market with its restaurants and built-in tourism industry. He easily rattles off a few names of people with influence who live in the area, noting the community’s cache and stability, in contrast to some upstate industry towns that are hurting.

He said that his Fordham coursework helped him when it came to setting up the business.

One of the biggest takeaways from his management classes was that he knew he needed to seek the help of experts. 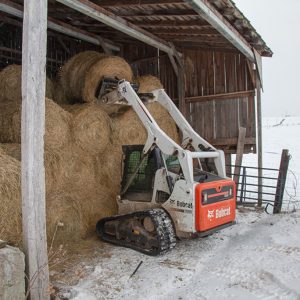 “I learned, ‘Don’t talk unless you know what you’re talking about,’” he said.

He hired an attorney, an accountant, and an IT company that focuses on marketing for startups.

“I didn’t have any background in any of those things, but I had the wherewithal to go search these people out—and that was huge in our management classes here at Fordham.”

But perhaps most importantly, he understood the benefits of working in a niche industry.

“If I had done dairy, if I had done Black Angus cattle, if I had done anything like that, I would have a lot of controls put on me by large corporations. But with bison, because it’s not as common, it’s almost kind of like the Wild West,” he said. “I had to make up my own prices because there’s not many of us here.”

He noted that many who are raising cattle have no idea where their goods are going to “after that 18 wheeler comes to pick up the product.”

“I have to go out, create my own business, as I’m doing here in New York City,” he said. “Walking around, going door to door. And I’ve found that that’s the best way to do it. It’s not calling people or emailing. It’s showing up as a farmer.”

For a country boy from the south, the idea of going door-to-door in the nation’s largest metropolis may sound off-putting. But between the time he’s spent in the area through politics and now as a student, Aubin appreciates the city.

“For what people say about New York City, I have not had anything but professionalism and people that are willing to talk to you here in this city. I haven’t seen a bad side of New York City yet, in my time here. I’ve really enjoyed it.”

He said business wise, New York state is in transition. Family dairy farms are “going down by the wayside left and right, after five years of declining prices for milk.” He noted that farmland in the eastern part of the state, where he is, is selling for $2,000 an acre, whereas in the western part of the state it’s going for $6,000 an acre because corporations are buying it up.

“Now, when you add that up, plus the fact that I’m making on average about $1 to $1.25 more per pound than my competition out west, it really says to me that there is nothing more than opportunity here for farmers in eastern New York.”