skip to main content
Return to Fordham University
You are at:Home»Colleges and Schools»School of Professional and Continuing Studies»Grace in the City

Grace Martin is a country girl intent on living in and learning about cities.

Martin, a senior at the School of Professional and Continuing Studies (PCS), grew up in a small town called Thompson’s Station that is about an hour outside of Nashville, Tennessee. She didn’t know anyone from New York, but she dreamed about coming here, she said. 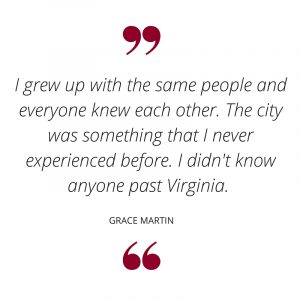 During high school, she took a few sociology classes at a community college that introduced her to urban studies; this inflamed her already substantial interest in city life. At the time none of her high school advisers or friends knew anything about colleges in the North, so she researched on her own where to go to school.

“I grew up with the same people and everyone knew each other, the city was something that I never experienced before,” she said. “I didn’t know anyone past Virginia. I moved to New York on my own.”

She came to New York in 2010 to attend another university and racked up a substantial debt, she said. She then returned to Nashville and worked as a legal assistant during the day and as a waitress during the nights and weekends.

She said that a Fordham alumnus told her to apply here. It didn’t take long before she realized that PCS might be the best place for her to complete her undergraduate degree while working full time.

In the fall of 2014, she took the plunge back into big city life and returned to New York City. She started working at Hachette Book Group and taking night classes at PCS.

Nowadays, Martin volunteers with hospice patients, plays soccer during the warm months, and is on a skee-ball team when it’s cold. She studies—a lot.

“I always knew I wanted to come to New York, but I don’t know why,” she said with a laugh.

She has received two urban studies scholarships from Fordham: the Joseph C. Brennan Scholarship and the Trinity Financial Fellowship, named for Trinity Financial, which alumnus James G. Keefe, FCRH, ‘74, founded.
This month she was inducted into the Beta Rho chapter of Alpha Sigma Lambda, an honors society for evening-school students.

“My goal is to stay in school consistently,” she said. “At first I didn’t know there were any scholarships available to me, but Fordham really came through.”

She expects to graduate with her bachelor’s in 2016 and then take her LSATS to pursue a doctor of laws degree in urban and regional planning. She said that just as she was intrigued with an unfamiliar city, she now finds herself drawn to international urban issues.

“I don’t know what international looks like, but I’m willing to learn,” she said. “I feel that we often apply a Western ideology to solve international urban problems.

“You have to empathize and learn where people are coming from and not simply apply what works in New York to a city in Kenya.”