skip to main content
Return to Fordham University
You are at:Home»Colleges and Schools»Fordham College at Lincoln Center»English Professor Laura A. Greeney Dies at 59
Photos courtesy of Andria Greeney and Fordham’s archives
Laura Anne Greeney, FCLC ’82, an adjunct assistant professor of English and assistant director for the College at 60 program, died at her home in Brooklyn this week. The cause of her death is unknown. She was 59.

“Devoted to her students, Professor Greeney was known as a caring and challenging teacher and mentor,” said Joseph M. McShane, S.J., president of Fordham. “I know you all join me in keeping her loved ones, friends, colleagues, and students in your hearts and prayers.” 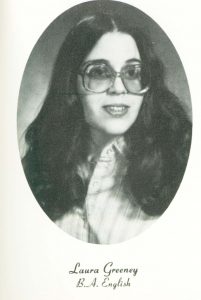 Greeney worked for two decades at Fordham College at Lincoln Center, where she infused her love of literature into the classroom. She taught writing, composition, and American and British literature in the traditional undergraduate program, evening degree program, and College at 60—a nationally recognized program in Fordham’s School of Professional and Continuing Studies for adults age 60 and older. She previously served as assistant director at the Writing Center at Fordham College at Lincoln Center, where she helped students from all backgrounds improve their writing skills and trained tutors and Law School writing instructors.

“She was a dedicated teacher, a lovely member of our department, and a hallway friend,” said Mary Bly, Ph.D., chair of Fordham’s English department. “She was a loyal and passionate Fordham family member, and she just gave it all to her students. She was beloved by PCS students, but also by undergrads. It’s such a loss to the University.”

In the past few years, Greeney coordinated a College at 60 lecture series that was open to the general public every semester. She moderated lectures and booked guests, including three-time Emmy-winning filmmaker Sara Lukinson.

“She had a thorough knowledge of the students and the program and could really provide things that they were interested in, but would also challenge them,” said Cira T. Vernazza, a retired associate dean at the School of Professional and Continuing Studies who directed the College at 60 program for many years. 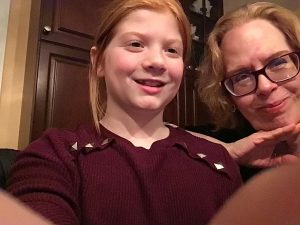 Greeney and her great-niece, Mackenzie

Sometimes Greeney delivered lectures herself. A few years ago in one well-attended talk, she spoke about one of her favorite books, The Great Gatsby, analyzing main characters Gatsby and Daisy and comparing the book to its movie adaptations.

“It was chock full of insightful analysis,” Vernazza said. “We had a full house for that lecture, about 120 people, who all mobbed her at the end. They were asking her questions about the lecture and telling her how wonderful they thought it was. I think it took another 45 minutes for everyone to talk to her about it, but she gave that time. She was delighted.”

Greeney was also an accomplished editorial and writing consultant and a development editor for several notable publishing houses. She worked with a large clientele, including the Bureau of National Affairs and the Educational Testing Service, the world’s largest nonprofit educational assessment organization. She was also a writer who published articles on student development and campus life, including a 2015 Civic Research Institute article on the rise of interpersonal teaching styles in universities. She also wrote book reviews for the feminist bookstore Bookwoman and published literary interviews and reviews for The River Reporter newspaper in Narrowsburg, New York. 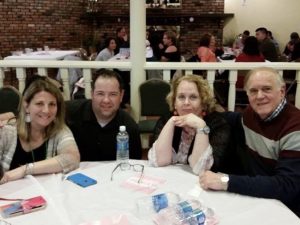 Greeney with her brother, Richard, her nephew, also named Richard, and her nephew’s wife, Jill

Greeney was a literature buff who admired the novelists Henry James and Edith Wharton. She often attended the Shaw Festival, a contemporary summer theater festival named in honor of Irish playwright Bernard Shaw. When the pandemic arrived in New York, she missed seeing performances and shows in person, said her niece, Andria Greeney.

“Some people are outdoorsy; some people miss traveling. She really missed Broadway and the arts,” Andria said. She fondly remembers Greeney showing her how to navigate New York City when she was a teenager.

Vernazza said Greeney was a kind, gentle person with a dry sense of humor, sometimes in a self-deprecating way, who loved to sing lyric opera. She also remembered her as a reliable coworker who followed through on her responsibilities.

But the hallmark of her personality, Vernazza said, was her kindness.

“I don’t think I ever heard her say a bad thing about anybody. She could be critical, but in a constructive way. But she was never mean, snipey, satirical, or sardonic. She was never like that,” Vernazza said. “She was cherished.” 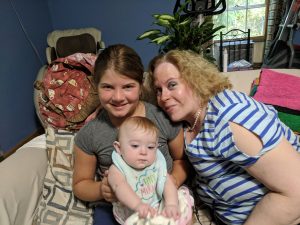 Greeney and her great-nieces Jordana and Zoey

She is survived by three siblings, Evelyn Dowd, Joanne Cresci and her husband Tom, and Richard Greeney and his wife Carm; three nieces and one nephew; and four great-nieces and one great-nephew. There is no information yet on the burial and memorial services, but this page will be updated with details as they are confirmed.