skip to main content
Return to Fordham University
You are at:Home»Colleges and Schools»School of Law»Provost’s Reports : School of Law 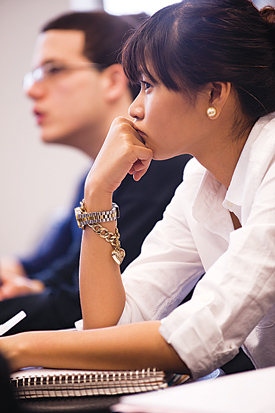 Since the publication of Toward 2016, the overarching goal of the law school has been to advance “to the level of accomplishment and recognition that warrants ranking as one of the 15 best in the nation.” The challenge is to focus strategically on the best means of realizing this transforming initiative. Academic year 2010-2011, in a sense, a new beginning: the law school welcomed a new permanent dean, broke ground on a new building, and recruited five senior faculty members who are outstanding in their specialties.

At the same time, the law school has made progress toward its goal of a top 15 ranking by pursuing a number of discrete initiatives, many of them multi-year efforts. In 2010-2011, U.S. News & World Report ranked Fordham Law No. 30 out of 190 accredited U.S. law schools, up four spots from the ranking of 34 the previous year, and closer to the historical high ranking of 25 in 2008. The law school’s evening program also rose and was ranked No. 2 out of 80 such programs, up from No. 3 the previous year. The law school remains very proud of the recognition garnered by its specialty programs, many of which were ranked in the top 15. For example, in U.S. News & World Report, the Intellectual Property Law program, ranked No. 15 last year, jumped up in the rankings to No. 12 this year and the Clinical Legal Education program was again ranked No. 13. 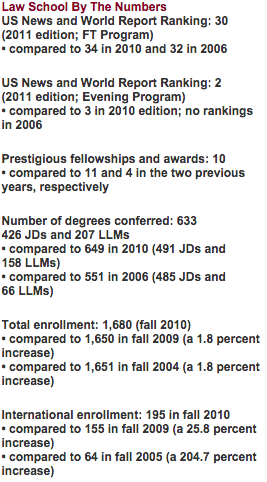 In 2010-2011, the law school sought to make a dramatic improvement—on the faculty recruitment front by making five lateral appointments. With the help of the Office of the Provost, the law school was able to extend the first five offers, which were accepted—a dramatic change from recent years, when it was common for the first few offers to be rejected.

The school also appointed an associate dean for research as part of a continuing effort to increase the visibility of its faculty, foster outstanding scholarship, and extend the reach of the law school’s influence. Strategic planning for joint degrees, and for retooling centers and institutes, is expected to further elevate the law school’s academic reputation.

Toward 2016 calls for better public relations and communication to ensure that the law school’s strengths are recognized, and to raise Fordham’s reputation as a top national law school. While the school has improved according to the objective metrics of U.S. News & World Report in the last several years, it has fared worse according to subjective metrics that make up 40 percent of the score. Its reputational assessment numbers are either constant or slipping.

In 2010-11, the law school adopted a more refined and targeted media strategy and launched two efforts to communicate its strengths. The first was a new publication, directed at U.S. News & World Report academic voters, that highlights the faculty’s scholarship and accomplishments. This publication, Faculty Spotlight, featured the work of some of the most recently tenured faculty members and situated even the youngest ones at the apex of their fields—which include law and education, immigration and labor law, constitutional law and theory, criminal law theory, and empirical studies. This publication will continue.

The second effort was the Fordham Law Roundtable Series, a series of reputation-building events that spotlight faculty expertise and improve outreach to judges and attorneys, particularly beyond New York and the Northeast/Mid-Atlantic regions. The series was co-sponsored with the American Law Media group, producer of national publications such as the American Lawyer and the National Law Journal and local publications including New York Law Journal. In all, more than 1,362 members of the bench and bar took part in the series via webinars and 95 attended the events. The series was a distinctive effort to reach out to members of the bar and bench on a national level. No other U.S. law school is doing anything like it.

The class that enrolled in August 2010 was the law school’s best ever. During the last admissions cycle, applications were higher and the law school had to admit slightly fewer students overall in order to build the desired class. Also, in a demographic shift, the law school made the transition from 320 attending during the day and 160 at night to 400 in the day and 80 at night.

In the 2010-2011 academic year, the law school continued to strengthen its signature programs—the master of laws programs, the program for visiting scholars and research fellows, and the Summer Institute in New York City. At the same time, the Doctor of Juridical Science program, or S.J.D. program and three new double-degree programs offered in conjunction with universities abroad will commence this academic year.

In developing these programs, the law school is building on the enormous popularity and success of its double-degree program with the Université Paris II – Panthéon-Assas. Select students pursuing the juris doctorate will be able to spend their third year at a partner institution in France, Italy, or Spain and earn a master’s degree from that institution in addition to a Fordham law degree. Students would earn one of the following: a master’s in international and comparative European Union law from Libera Università Internazionale degli Studi Sociali Guido Carli (LUISS) in Rome; a master’s in international and European business law from Universidad Pontificia Comillas in Madrid; or the Diplôme d’Université en Droit from the Université Paris I – Panthéon-Sorbonne (Sorbonne).

LUISS and Comillas were chosen as partners because of their outstanding reputations and the breadth and depth of their English-language curricular offerings in areas that are at the heart of today’s global economy.

Other partnerships and affiliations

The law school formed a partnership with the Graduate School of Business Administration to offer the Fordham Accelerator for Business (FAB), a practicum that helps prepare young entrepreneurs to launch a business. This intensive immersion program confers an understanding of the partnership building, strategy, and tactical execution required to advance a start-up company. Participants work directly with faculty and community coaches who are experts in opportunity analysis, investment due diligence, market road-mapping, portfolio governance, lean startup principles, and other topics.