Manjusha P. Kulkarni, a racial justice attorney who was named among the 100 most influential individuals in 2021 by TIME magazine, delivered the lecture “Combating Hate, Racism, and Xenophobia Against Asian Americans and Pacific Islanders” at Fordham Law event on Feb. 24.

“What we’re talking about today is not simply acts of interpersonal racism, which are based on prejudgment bias and result in discrimination on an individual basis, but also institutional racism that has policies and practices that benefit white Americans to the detriment of people of color, whether they’re intentional or inadvertent. That, combined, creates what we have in America, which is structural racism—a history and current reality of that institutional racism,” Kulkarni said. 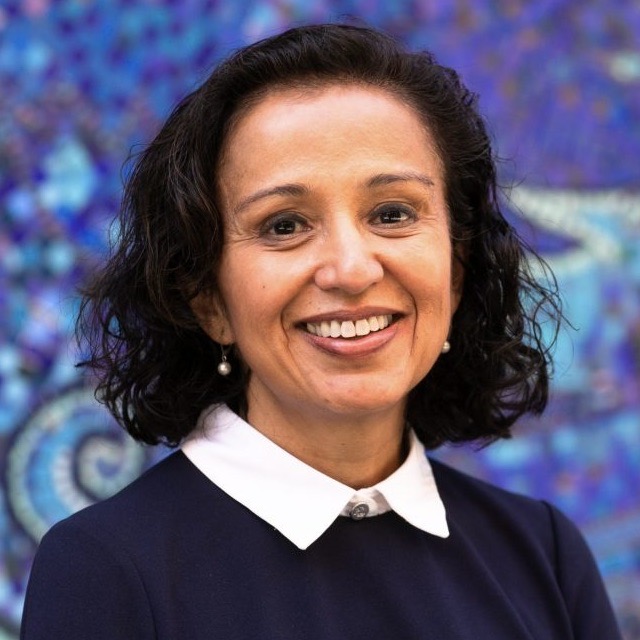 Kulkarni is executive director of the AAPI Equity Alliance, a coalition of community-based organizations that advocates for the Asian American and Pacific Islander community in Los Angeles County and beyond. She is also a co-founder of Stop AAPI Hate, a nonprofit that tracks and responds to hate incidents against Asian Americans and Pacific Islanders across the country. In 2014, she received the White House’s Champions of Change award for her efforts in improving health care access for the AAPI community. Last year, she testified before Congress on the issue of anti-Asian hate.

Kulkarni, who was born in India and raised in the U.S., recalled an incident that inspired her career. She said that when her mother interviewed for a position at an American hospital, a panel of white male physicians asked her, “Why do you foreigners come to the United States and take all of our jobs?”

“She and my father, who is also a doctor, chose to bring a class action lawsuit with the help of an attorney … to fight not only the discrimination she experienced, but practices and policies in the state of Alabama that prohibited non-European immigrant doctors from practicing and being part of a residency program,” Kulkarni said. “They happened to get a successful settlement in that case. And it was because of that … I saw that the law could be used as a tool for redress.”

A Crime with a Community-Based Solution

Kulkarni is now using the law to help the AAPI community. In response to the rise of anti-Asian hate at the beginning of the pandemic, Kulkarni co-founded Stop AAPI Hate. Since the nonprofit was founded in March 2020, it has received more than 10,000 reports of discrimination across the country, said Kulkarni. Many incidents involved women who were verbally harassed in public parks and streets. However, most of them are not technically categorized as a crime, said Kulkarni.

“A majority of the incidents reported to us, upwards of 90%, actually do not involve a crime or do not rise to the level of a crime. That’s particularly true with physical assault,” Kulkarni said, including throwing bottles at someone or shoving a person in a manner that doesn’t result in significant physical harm.

But although the incidents don’t warrant legal punishment, they negatively impact their victims. Kulkarni said that in a Stop AAPI Hate survey conducted with the Asian American Psychological Association, they found a 155% increase in depression among Asian Americans.

“In that same survey I mentioned, 72% said that they were more concerned about COVID-19 related hate as opposed to the virus itself and its impact,” Kulkarni said.

She encouraged the audience to report anti-Asian hate crimes they have witnessed or experienced, share resources and safety tips, and advocate for policy changes. She also noted that Stop AAPI Hate co-sponsored two bills that were recently introduced to the California legislature to address street harassment and public safety issues.

‘The Best Place to Begin to Become an Advocate’

In a Q&A, a student pointed out that in mainstream media, the ethnicity of perpetrators of anti-Asian hate crimes is often highlighted, leading to resentment against the Black and Latinx communities. But there are recent studies that reveal the majority of perpetrators are not people of color, said Kulkarni. She added that reports from Stop AAPI Hate support these findings, too.

“We know from the descriptions that have been offered by individuals on the [Stop AAPI Hate] reporting form that African Americans are not the leading perpetrators. This is really important information, and I think the studies that have been done also by the two professors show that and can really, I think, as we begin to spread that information, help to combat some of the anti-Blackness,” Kulkarni said.

When asked about how to handle discriminatory comments from professors, which has been seen in other law schools across the country, Kulkarni advised students to reach out to University student organizations, like Fordham’s Asian Pacific American Law Students Association, as well as the law school’s diversity, equity, and inclusion officers.

“You know your campus. You know your community. This is the best place to begin to become an advocate—on issues that impact you directly,” Kulkarni said.

Kulkarni’s lecture was part of the Feerick Center Speaker Series, which invites scholars to speak about timely social justice issues. The event was co-sponsored by more than 20 organizations.