skip to main content
Return to Fordham University
You are at:Home»Colleges and Schools»School of Law»Law Alumni Share Timeless Advice with First-Year Law Students
Photos by Chris Taggart and video by Jon Roemer
At a special orientation event for first-year students at the Fordham School of Law, five accomplished alumni and President Tania Tetlow—a former federal prosecutor and law professor herself—shared career advice that can be useful for not only lawyers-in-training, but professionals in every field. 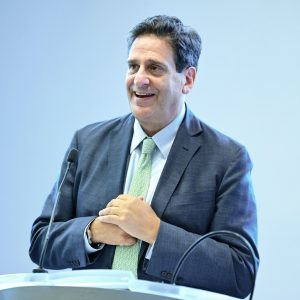 “You’re going to be making decisions from day one about who you want to be, and part of the wisdom that we want to give you today is that being a good and decent person will make you happier,” Tetlow said to about 400 students at the Lincoln Center campus on Aug. 18. “We want you to think about … who you’re trying to be in the world, to never lose sight of that.”

The Professionalism Panel, a time-honored tradition at the Law School sponsored by the Fordham Law Alumni Association, was a unique part of orientation programming for first-year law students. It was the only time that the entire class would gather in the same room besides their graduation ceremony, said the Law School’s dean, Matthew Diller, and a place where they formally take the “Oath of Professionalism” at a ceremony joined by faculty and alumni. But on a deeper level, the event showed the students what it takes to build a meaningful career and life, no matter how they decide to use their degree.

A Personal Reflection From President Tetlow 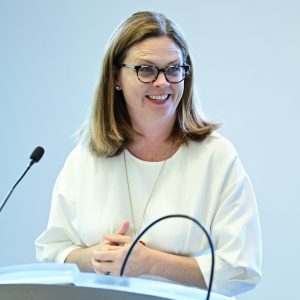 The professionalism panel began with an introduction from Tetlow, who recalled her own experience in the legal profession.

“It was 30 years ago this week that I was starting law school, feeling absolutely terrified and thrilled at the same time,” said Tetlow, who would go on to collaborate on cases with the FBI and lead a domestic violence clinic at Tulane Law School. “There will be 1,000 tiny [decisions]about who you want to be as a professional, and most of all, as a human being.”

To a lawyer, professionalism is more than being polite—it’s acknowledging that lawyers wield enormous power, she said.

“I remember sitting in your shoes, not feeling terribly powerful. But you are, in fact, about to garner a whole lot of power … to do right by your clients, even when you’re really busy and exhausted; to follow the rules, even when it’s tempting not to, and fundamentally … to uphold our democratic systems or to chip away at them,” she said.

‘Look At a Case as a Person’

Tetlow then moderated a panel of accomplished alumni whose careers have taken them to different sectors of the law: Jojo Annobil, LAW ’90, executive director of Immigrant Justice Corps, a nonprofit that trains lawyers to assist immigrants in need; Palmina Fava, LAW ’97, a partner at Vinson & Elkins, LLP, who has tried and defended cases in federal and state courts, including the U.S. Supreme Court; Sam Khichi, LAW ’98, an executive vice president and general counsel at multinational medical technology firm Becton, Dickinson and Company; Hon. Katherine H. Parker, LAW ’92, U.S. magistrate judge for the Southern District of New York; and David Tanen LAW ’96, co-founder and partner of Two River, a venture capital firm that assists life science companies.

For about an hour, the panelists reflected on their own careers and how their Fordham education has made a difference.

Khichi, an immigrant and veteran who graduated from law school at age 31, said he found a “hardworking, gritty, good” community at Fordham, where he balanced evening classes with a daytime job. He said that the Jesuit values he learned at Fordham helped him to distinguish himself from his other colleagues.

Annobil, a lawyer who has protected immigrants’ rights for nearly two decades, described how his career embodies a Jesuit education. “You look at a case as a person,” said Annobil, who is an immigrant himself. “I try my best to see how I can [meet]that person’s hopes, fears, and aspirations.”

Fava said that her pro bono legal services are inspired by her identity as the daughter of immigrants and a veteran, as well as the mother of four children with different learning styles. “I look at my pro bono service in keeping with those issues, with immigrants’ rights and veterans’ rights [and education],” said Fava. “Those are the ways that I try to channel the things that are interesting to me, that I have some experience with, that I understand, and [where I]can make some changes.”

Personal Advice From the Panelists

In addition, the panelists shared practical advice that can be applied to not only the courtroom, but professions in every field:

Don’t forget to invest in your personal relationships, even when life gets busy. “Relationships really matter, and they’ll carry you when things are tough,” said Khichi. “I can tell you that when things were tough for me throughout my career, it was the Fordham relationships that I made, whether they were with faculty or folks I attended school with, that I relied on for advice.”

Take care of yourself before you help someone else. Otherwise you’ll burn out, said Annobil. He urged the students to exercise, sleep, and to devote time to themselves. “It’s OK to say, no, I can’t take this case because I have too many things going on in my life right now,” he said.

Put yourself in another person’s shoes. Tetlow asked the students if they had ever had to engage with a lawyer or knew someone who did. Half of them raised their hands. “Remember that feeling of hoping your lawyer is going to return your call, of hoping that they are prepared, that they actually care about you and your case,” she said. “It wasn’t until I was 40 that I actually had to hire a lawyer for something. It was a very humbling experience.”

Don’t be afraid to admit when you don’t know something. Be truthful when you don’t have a fact or case at your fingertips, said Judge Parker. “Be able to say, ‘I’m not sure about that. I can get back to you tomorrow in a letter,’ or something like that.”

Don’t underestimate the power of EQ. “Someone’s ability to get along with others is just as important, if not sometimes more important, than their pedigree of service,” said Khichi.

Treat all people with respect—including your adversaries. Judge Parker said she asks people for their pronouns and honorifics, checks to see if they require accommodations, and encourages firms to allow their junior associates time to talk. She also said that it’s important to be courteous to your adversaries in the courtroom. “There’s a belief that some lawyers have that in order to be aggressive and zealous in representing your client, that means being a jerk to your adversary, and that’s not the case. You can be very effective, but still be cooperative,” she said.

Be prepared to pivot. Tanen said he always wanted to be a criminal defense attorney. When that career path didn’t work out, he was devastated, but he later found another opportunity and went on to co-found several companies. “Fordham teaches you to be a gritty attorney,” he said. “There is no job too big. There is no job too small.”