First of all, allow me to echo Mike Stanton’s welcome to the faculty, students, and alumni of Fordham Law; 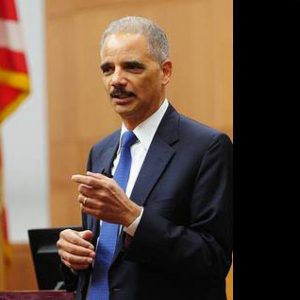 esteemed members of the bench and the bar; and all the friends of the Law School here tonight.

I am particularly delighted to welcome Attorney General Eric Holder back to New York. As you may know, Mr. Holder was born in the Bronx and attended high school, college, and law school here in Manhattan, at Stuyvesant and Columbia, respectively. (Mr. Attorney General, we will try not to hold that against you.)

Tonight we justly celebrate Mr. Holder’s stellar career and accomplishments. He has reached the highest echelons of his profession and (thank God) still has a long career ahead of him.

Hmmm. Conscience. Devotion to ideals. Courage. ‎ If you put it all together, it is clear that the Stein Prize was and is intended to honor women and men of integrity who have the courage to ask bold questions, unsettling questions, inconvenient questions, necessary questions, questions that call us to live guided by our best angels—for the good of others.

Now, I may be wrong, but I think that Mr. Holder is just such a person. He is a man who clearly fell deeply in love with the ideals upon which our nation was founded at an early age. He is also a man who clearly believes that those transcendent ideals remain luminously important to us. It is precisely because he thinks this way that he has (over and over again) asked us to wrestle with tough questions so that we can create a more perfect union.

Part patriot, part prophet, he has insisted on calling us back to our foundational ideals. Part noodge and part pastor, he has insisted on challenging us to allow those best angels to which I referred a few moments ago to guide and inspire us. And he has done so with telling results. Along the way, he has also equipped us with the weapons and skills that we need to face and to face down the crises of our times with strength, conviction, principle, and character. And let us be frank here: we live in a time that has more than its share of crises and/or occasions for reflection and a recommitment to the ideals that we hope still define us as a nation.

Nowhere is the critical nature of the time in which we live felt with more of a sense of world-changing urgency than on our nation’s college campuses or in the hearts and souls of our students. Haunted or inspired by the same ideals that have always captivated and guided Mr. Holder, our students are asking bold, tough, unsettling (and saving) questions about justice, race, poverty, alienation, marginalization, empowerment, and the very redemption of our nation. Although they are not unique, Fordham students (like students at other colleges and universities) have thrown themselves into the saving work of wrestling with these great issues. In the process, they have called and challenged us to examine our lives and to recommit ourselves to living the kind of lives and being the kind of people we call them to be: men and women of character, men and women for others, men and women who will transform the world through love.

Mr. Holder, we rightly honor you tonight not just for your personal achievements, but for your strong and consistent work for immigrants, for hate crime laws, and for civil rights and voting rights. Far more, however, Mr. Attorney General, we honor you for being a man who is and can be a role model for our students: a man of principle, great heart, deep faith in the transforming power of the law, and a man of courage who can and does ask hard, unsettling, necessary questions, questions that call us to live lives with a noble sense of purpose. And just what is that noble sense of purpose? Quite simply this: the transformation and redemption of the world through service, service that is born of a restless love that seeks justice and that finds its perfect fulfillment in the creation of that more perfect union that our Founders dreamed of and challenged us to achieve.

Mr. Holder, continue to be part noodge and part prophet. Continue to challenge, inspire and unnerve us. Continue to be what we proclaim you to be to be this night: a true and worthy member of the Stein Prize pantheon! Congratulations.