The event, titled “A Conversation About the Well-Being of America’s Children,” included the presentation of distinguished chair medals by Joseph M. McShane, S.J., president of Fordham.

“Thank you for dedicating your lives to the protection and the cultivation of hope in the hearts of children, especially children who have been forced by circumstance to live at the margins of society,” he said. 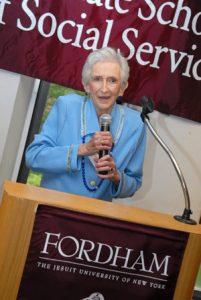 In a short talk following her induction, Gatenio Gabel thanked the Quaranta family for funding the chair honoring Mary Ann Quaranta, D.S.W., who died in 2009. Quaranta, a graduate of the GSS class of 1950, would go on to serve as dean of the school from 1975 to 2000, taking it from a small local school to one that ranked eleventh in the nation. She also established the school’s doctoral program. Like Dumpson, she was named a Social Work Pioneer by the National Association of Social Workers.

Gatenio Gabel has served as a consultant to UNICEF, UNESCO, and U.N. member countries on child poverty, advocacy, and protection. She’s twice been awarded Fulbright Scholarships to study child and family policies.

Her talk detailed how racial inequities have become embedded into the American child welfare system. She said that in the early part of the 20th century, social work pioneers identified potential harm that could come to children and pushed for laws on child labor, welfare, schooling, and a juvenile justice system—all of which ignored class and race disparities.

“Many scholars have questioned whether the reformers were acting in the best interest of children, or whether the intent was to extend governmental control over children of the poor,” she said.

She noted that the 1980s was the last time white children were in the majority; by 2040, she said, they will comprise 43% of the child population. Black children are three times more likely to live in deep poverty than white children, and Hispanic children are 2.5 times more likely to live in low-income households. Yet child welfare, health care, and educational systems continue to harken back to the turn of the last century when race was not a consideration.

“Our cries for justice for children today rest on our ability to build new anti-racist systems in social services, education, law, health, and law enforcement.  Only when new systems are implemented will we be able to bring justice to all children in this country,” she said. 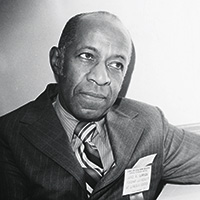 Following her induction, Williams-Isom noted that her chair’s namesake, James Dumpson, Ph.D., was an educator before he became New York City’s first Black welfare commissioner, and, later, dean of GSS, a position he held from 1967 to 1974.

“Social work and education are brother-sister professions,” said Williams Isom, who served as CEO of the anti-poverty organization Harlem Children’s Zone from 2014 to 2020. There, she oversaw all programs in the cradle-through-college pipeline to improve services and outcomes for 25,000 children and parents in Central Harlem. She agrees with Gatenio Gabel that the child welfare system needs a complete overhaul.

“There are 12 million children living in poverty today, making them the poorest age group in America,” she said, emphasizing that overall 32% of Black children and 23% of Hispanic children live in poverty. “And 320,000 children have been pushed into or near poverty due to the pandemic’s economic downturn.”

“I think that Dr. Dumpson would have been calling for us to reimagine literally everything that has been done before because it has not been working for so many children in our nation,” she said. “Many of the systems that serve Black and brown children are imbedded with systemic racism and so they can never achieve the outcomes that we seek.”

She said that while the pandemic may have shocked some about the inequities it exposed, people in affected communities weren’t surprised. Yet, she said that much could be possible in the post-pandemic world.

“We have agency and we have choices,” she said.

She said that the necessary changes will take what journalist Isabel Wilkerson calls “radical empathy.”

“Radical empathy is not about you and what you think about a situation that you have never been in and probably never will be in,” she said. “It is a kindred connection from a place of deep knowing that opens your spirit to the pain of another as they perceive it,” she said.

Taking on that perspective will allow policymakers, social work practitioners, and public and nonprofit leaders, as well as faculty at universities, to understand that child welfare systems need drastic change—even at the institutions they serve.

“We must finally admit that these systems were not designed with abundance in mind, they were not designed for people that we love and respect,” she said. “They’re designed as if resources were scarce and we just have to tolerate black and brown bodies.”