skip to main content
Return to Fordham University
You are at:Home»Colleges and Schools»Graduate School of Social Service»Graduate School of Social Service Holds Conference on Military Social Work at West Point
Delegates at Trophy Point, West Point (Event photos by Dana Maxson; group photos by Karen Green-Hurdle)
This past April, the Graduate School of Social Service sponsored a three-day inaugural International Military Social Work Conference at the Thayer Hotel, United States Military Academy at West Point. Mary Ann Forgey, Ph.D., professor of social work, organized the conference with additional support from the International Association of Schools of Social Work (IASSW), the Office of Military Family and Veterans at the University of Alabama, and the Fordham Ravazzin Center.  Prior to her academic career Forgey worked within the military as a civilian social worker at a U.S. Army base in Germany from 1983 to 1987. Since coming to Fordham in 1993 she has continued her work with the military through her research, teaching, and scholarship. 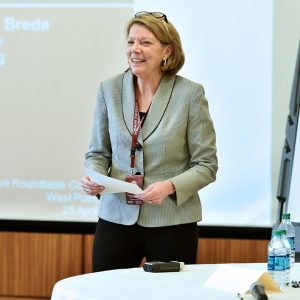 Mary Ann Forgey: Broadly speaking, military social work practice involves the provision of a wide range of services on an individual,  group, family, organization and/or community level to active duty service members, veterans, and their families.  The services provided can range from counseling and case management to program/policy development, research, and advocacy. There are many commonalities to working with the active duty military and veteran populations, but there are many differences as well.

MF: Social workers who work within the military are responsible for providing multi-level support to the service member to address various types of stressors so that they can function in their role as a member of the armed forces. This is a very different role from social work practice with veterans, which is mainly focused on providing a range of services to support the veteran as they function within civilian life.

TS: What was the focus of the International Military Social Work Conference?

MF: At the conference, we focused specifically on the roles of both uniform and civilian social workers who are employed directly within their country’s military.

We spent some time discussing how different practice settings impact the role that they have. For example, in some countries, social workers, both uniformed as well as civilian, are embedded within the military unit. They not only work with the individual service members who may be experiencing problems, but they work on issues that may be impacting the unit as a whole. This requires them to also treat the unit as the client and to get to know the unit as a whole, and that entails working very closely with the unit leadership. This is a very different role from social workers who practice in a mental or behavioral health clinic setting. In those settings, the work tends to be much more individually based.

There were also some countries where the stigma of a service member seeking help from a social worker did not seem as strong as other countries. More exploration is needed to understand the impact that the setting might have on practice, and if the type of setting itself may be creating or adding to the stigma of getting help. 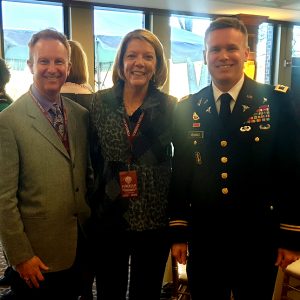 TS: In a civilian setting, a therapist would never go to a patient’s boss and discuss their problems, but within a military setting, particularly if a patient’s behavior is going to affect the mission, one would assume the social worker would be required to tell their commander. Is that true? If so, what are the ethical conundrums that come with that?

MF: Within the U.S. and some of the other countries who participated in the conference, that is correct– under specific circumstances involving risk of self-harm or harm to others. There’s a responsibility on the part of the “boss,” the commander, to ensure their service members’ safety as well as the safety of others, and a responsibility to the mission as a whole. Then the questions become how much does the social worker share? Which type of information? To what extent? And I think when commanders and social workers have a mutual understanding and respect for each of their roles and responsibilities these issues can get worked out in a more ethical way. The most important thing is developing a good relationship with the command so that they understand what you do, how you do it, and what you need to do your job well as a social worker.

TS: Some countries, like the U.S., have very separate delivery systems for social work services for active duty service members than for veterans. What other models did you hear about at the conference?

MF: Some other countries have a more integrated delivery system in which military social workers work with both active duty and veterans within the same organization. And in the more integrated systems, the social worker is able to assist in the transition from military to civilian life in a more seamless manner.  When the delivery systems are so separate for active duty and veterans as they tend to be in the U.S., the navigation between the systems of care is left mostly up to the individual service member and their family members. And this is clearly, I think, a role that social work could assist more with but the delivery systems aren’t set up in a way to facilitate this.

TS: The conference keynote was presented by  Adrian van Breda, professor at the University of Johannesburg in South Africa. What did his talk focus on?

TS: What were your key takeaways?

MF: Although I knew we were responding to a need for a global discussion about the practice of military social work, it was confirmed by the number and the range of delegates that registered and traveled the distance that they did to come. But I have to say, I was quite moved by witnessing such easy camaraderie that the participants had throughout the conference. I think it demonstrated the amount of shared understanding about the importance of this role within the military and the challenges faced.

There was also a strong desire to learn from each other, and to learn about the similarities and differences. And on the last day of the conference, there was a consensus that we needed to find a way to continue this conversation. The group made a preliminary plan to meet every two months in a virtual forum.