Mayor-elect Eric Adams announced Williams-Isom’s appointment during a press conference on Monday, Dec. 20, where he introduced four other women who will serve as deputy mayor in his administration.

“You are just seeing the coming together of an amazing team,” Adams said. “This is going to be my core leadership, and they are going to ensure that we move our city in the right direction.”

In her role as deputy mayor, Williams-Isom, a 1986 graduate of Fordham College at Lincoln Center, will oversee the city’s health and social services agencies, including the New York City Health and Hospitals Corporation, the Department of Social Services, and the Administration for Children’s Services. She’ll work to address the needs of seniors, children, victims of domestic and gender-based violence, and people struggling with hunger and homelessness. One of her main areas of work will be to continue to guide the city’s COVID-19 response and address some of the issues exacerbated by it, including a growing need for mental health services.

“We’ve all been hit hard by this pandemic, and we are all feeling it. But I know that this administration will help us get through. We will heal, and we will heal together,” Williams-Isom said after the announcement.

Williams-Isom will be sworn in on Jan. 1, along with Adams and the rest of his administration.

She was raised in Queens by a single mom, a Trinidadian immigrant and a nurse who always stressed the value of a good education. After completing her bachelor’s degree in psychology and political science at Fordham College at Lincoln Center in 1986, Williams-Isom went on to earn a J.D. from Columbia Law School. She also received an honorary doctorate from Fordham in 2018.

Lifting Up Those in Poverty

Anne Williams-Isom, speaking at Fordham when she was CEO of the Harlem Children’s Zone
(photo by Tom Stoelker)

Williams-Isom is no stranger to working with people in need, particularly children and families in poverty. Prior to returning to Fordham as the Dumpson Chair, Williams-Isom spent more than 10 years at Harlem Children’s Zone (HCZ), a nonprofit anti-poverty organization, first as its chief operating officer and then as its CEO. The organization was praised by former President Barack Obama as a “model anti-poverty program for the nation.”

More than 25,000 children and parents in Central Harlem participate in the organization’s “cradle to college pipeline” programs that aim to break the cycle of generational poverty through workshops for new parents, academic help in HCZ-run charter schools, and college prep services.

“It’s not just me running a school well or an after-school program well. I’ve got to run 24 different programs really, really well. Mediocrity can’t be,” Williams-Isom told Fordham Magazine in 2014 after her appointment as CEO. “It comes down to this sense of urgency: How many generations are we going to let fail?”

Williams-Isom continued those efforts in her most recent role as the James R. Dumpson Chair at Fordham, where she worked with faculty and students to develop research, programs, and policy analyses that improve services to at-risk children and families.

The position was named after James Dumpson, a former dean of Fordham’s Graduate School of Social Service who, like Williams-Isom, worked on bettering the lives of children. He was a social worker, professor, and administrator who began his career as a children’s caseworker and rose to become New York City’s first Black welfare commissioner in 1959.

“For me to be able to come back [to Fordham]  and really think about service and what it means to serve the most vulnerable is an honor. Put that together with Professor Dumpson’s vision—and as an African American woman—I think he would be super proud to see me in this position,” she said.

When she took the role in 2020, Williams-Isom said that for years she had been working to help provide a “holistic approach to our children and families,” and that she appreciated Fordham’s commitment to cura personalis, or care for the whole person.

“I think attending to somebody’s spirit is very important, especially with the trauma that we have seen, based on the policies under which disenfranchised folks have had to live in this country,” she said.

Working for the City

When Williams-Isom is sworn in on New Year’s Day, it won’t mark her first experience in New York City government. She spent 13 years, from 1996 to 2009, in the city’s Administration for Children’s Services, first as the director of the Office of Community Planning and Development, then as special counsel to the commissioner and as associate commissioner for external affairs, and finally as the deputy commissioner for community and government affairs. Before working for the city, Williams-Isom worked for five years as a lawyer after graduating from Columbia Law School. 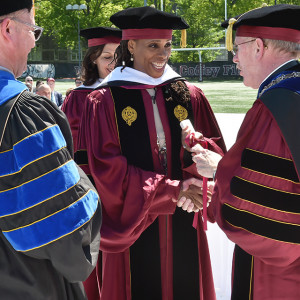 Williams-Isom receives an honorary doctorate from Father McShane at the GSS commencement ceremony in 2018. (Photo by Dana Maxson)

In 2016, she was appointed by New York City Mayor Bill de Blasio to his Children’s Cabinet Advisory Board.

Earlier this month, in her role as the Dumpson Chair, Williams-Isom convened a group of more than 175 parents, community activists, lawyers, academics, nonprofit leaders, and government employees for the first of four meetings to discuss ways to reform the child welfare system, which has been disrupted by the COVID-19 pandemic. The discussion, titled “Narrowing the Front Door to NYC’s Child Welfare System,” will resume in January.

At the initial meeting, Williams-Isom said she has spent years thinking about ways to fix the child welfare system, dating back to her first stint with the city in the 1990s, and she noted that it disproportionally affects families of limited means and those who are Black and Latinx.

“There are people who say you have to blow up the whole system, because it’s terrible and based on racist principles, and we can’t fix it,” she said. “Then there are people who are reformers like me. I call myself ‘abolition curious.’ I’m kind of beginning to see it’s not as easy to change systems and take out the years and years of racism in them.”

In her new role, Williams-Isom will be tasked not only with reforming the child welfare system but also overseeing critical health and social service agencies dealing with inequities that have been exacerbated during the pandemic. After she was inaugurated as the Dumpson Chair, she said now is the time to take a look at these services anew.

“We have agency and we have choices,” she said, adding that the necessary changes will take what journalist Isabel Wilkerson has called “radical empathy.”

“Radical empathy is not about you and what you think about a situation that you have never been in and probably never will be in,” she said. “It is a kindred connection from a place of deep knowing that opens your spirit to the pain of another as they perceive it.”