skip to main content
Return to Fordham University
You are at:Home»Arts and Culture»The Pantheon Today: Church and ‘Profoundly Open Space’
The Pantheon at night. Photos courtesy of Tom Beaudoin
Every year, millions of visitors pour through the Pantheon. The 142-foot-tall temple (and now a church) is a testament to history—to the gods of ancient Rome and the miracles of early engineering. But to the many tourists who frequent the monument in Rome, Italy, it’s simply another spot to snap selfies and post Instagram stories, said a Fordham professor.

“Most of the people who frequent it don’t know its history, don’t know who’s in charge, and are not necessarily [church]  members,” said Tom Beaudoin, Ph.D., professor of religion in Fordham’s Graduate School of Religion and Religious Education. “And so, that raises two questions for me: What is the Pantheon staff doing, in relation to that situation? How do they think about relating to all those folks—six to seven million people a year who come through?”

For the past few months, Beaudoin—a practical theologian who explores how people practice religion in their daily lives—has been trying to understand how today’s people experience the Pantheon. What do they think of the Pantheon? And how can the Pantheon staff better connect with their visitors? 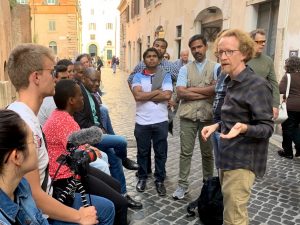 Beaudoin speaking about the Pantheon to members of Saint Catharine of Alexandria, a multi-campus ministry from the Netherlands, in Rome last October

Beaudoin’s research comes amid recent religious shifts in the U.S. Over the past decade, the number of American adults who identify as Christian has decreased by 12 percentage points, according to the latest research from the Pew Research Center. Meanwhile, the religiously unaffiliated population, which consists mostly of young adults, has increased from 17% to 26%.

But Beaudoin says the church’s affiliation crisis is also a good opportunity to reflect on the institution’s identity in the 21st century. One perfect model is the Pantheon, he said: a Roman Catholic church whose audience has vastly changed over the millennia, from faithful parishioners to short-term tourists.

“I see the Pantheon as a symbol for the predicament of many legacy Western churches, meaning that you are in a situation where you do not own your core audience anymore, and you have to relate to people who may not understand the value system that you bring,” he explained.

He selected the Pantheon for a second reason. Beaudoin wanted to see how “profoundly open spaces” like the Pantheon can help people feel more interconnected with the world around them.

“I’m also a musician. I know that in arenas, certain kinds of concert venues or open-air festivals, there can be a communal experience where differences are driven down in that space,” Beaudoin said. “I thought, well then, what about the Pantheon? It’s open to the sky. It’s got a nine-meter oculus at the top. And it’s got these monumental front doors that never close except at night.”

Last summer, his research began in earnest. For roughly 140 hours in total, Beaudoin roamed the Pantheon and observed life around him. He paid attention to what visitors saw, how much time they spent in the building, and which areas they frequented. He also interviewed 20 people who work at the Pantheon — pastoral staff, state employees who manage the space, and staff at the visitor’s desk — about what the Pantheon meant to them. 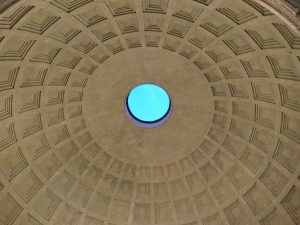 Beaudoin is currently analyzing his observations. He’s also creating a five-minute online survey that will be distributed to Pantheon visitors next year. From fall 2020 to spring 2021, visitors will have the opportunity to answer experience-based questions: How did they feel in the Pantheon? What did they notice? What were they curious about? Did they know the building is a church?

So far, he’s noticed a few themes. Among them is how visitors treat the space as “a historical space—not a spiritually significant space in the present.”

“One is how utterly influential Wikipedia and guidebooks are in telling you what the space means. People are often going through the space with their phones, open to the Wiki page, or they have their [paper]  guidebook … But you’re not being asked to think about your own internal experience of the space or alternative interpretations of the space,” he said.

He’s also observed visitors’ fascination with the Pantheon’s open dome and the rain that falls through onto the floor.

“None of the guidebooks or the Wiki page treat the water on the floor as an aesthetic site of its own. But it is,” Beaudoin said. “As soon as it starts raining, people run inside and watch the water collect on the floor …  In a way, it’s a little strange, right? Couldn’t you just go outside and look at the rain on the pavement or just be rained on? Why are people doing that? Why is it significant? What [part of us]  does it tap into?”

Beaudoin’s work was supported by a fall 2019 faculty fellowship and a faculty research grant from Fordham’s Office of Research. A full report of his findings will be shared with the Pantheon’s religious leadership in 2021. Leaders there say that Beaudoin’s research—the first of its kind—may help them better connect with visitors and encourage a more spiritual experience.

“The collaboration with the study of Fordham University could help us to better understand the points of views of those who benefit [from]  the visit, the strengths of the visit [and]  what can be done to promote the spiritual dimension of the visit itself,” Pantheon archpriest Msgr. Daniele Micheletti said in a translated email.