skip to main content
Return to Fordham University
You are at:Home»Colleges and Schools»Graduate School of Religion and Religious Education»In the Wake of the Parkland Shooting, Lessons from Sandy Hook

If you enter the office of the congregation, a big golden retriever might greet you with a stuffed animal while Alpha, the congregation’s betta fish, wiggles by in a tank nearby. A garden walkway is a sanctuary for wandering minds. The church also offers yoga classes to members of the Newtown community.

But the classes are less about learning how to perfect a Downward-Facing Dog and more about providing a portal for trauma recovery, said Crebbin.

“The feeling of trauma—the depths of it—is that ‘my life is never going to be the same,’” he said. “If you have this image that ‘I’m going to be healed or I’m going to go back to the way my life was,’ that’s not helpful because people will never get there.”

“It’s like you have a broken leg that has never quite healed right, and so you always have a limp, but you learn to dance with the limp,” Crebbin said, paraphrasing a quote from bestselling author Anne Lamott. “I think those images are more helpful to us than images that suggest that life will return to normal.”

Roughly two weeks after the Feb. 14 shooting rampage in a Parkland, Florida high school claimed the lives of 17 people, Crebbin stressed that simply being present for people who are traumatized can be transformative. 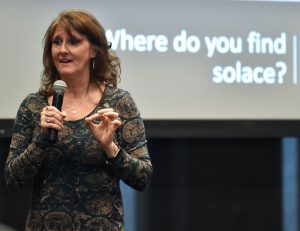 “Over time, there are ups and downs, but slowly we find ourselves somewhere down the path to new wisdom [or]a life where the trauma hopefully for the community is integrated in such a way that there isn’t a denial of what happened,” he said.

Fisher, an advocate of nature-based interventions for trauma treatment, cautioned practitioners, as first responders to trauma, not to neglect their self-care.

“When we [ourselves]are overwhelmed, we silence the responses of our clients, patients, and community because we can’t take anymore,” she said. “If we ever had an argument for self-care, that’s it. If we’re not taking care of ourselves, we run the risk of dismissing their stories and causing harm to them.”

Taking on an activist role has helped some Newtown parents and community leaders to reclaim their power, said Crebbin. Some residents have joined gun reform coalitions while others have established foundations in memory of their children.

The Parkland teens have taken their activism a step further, he said, with a televised gun control rally shortly after the shooting, as well as a forthcoming March for Our Lives protest and nationwide walkout for gun reform.

“The response [to mass shooting]has changed from Newtown,” he said. “People were reflective. Now, people are angrier [because of]the lack of change,” he said.

Pastors and other spiritual leaders have also been called to take their ministry beyond the pulpit.

“Prayers are not nothing, and action is everything,” said Fisher. “We have to get out of our offices, off of our chairs, and take action.”

Crebbin argued that gun violence in communities of color should also be a national concern.

Finding Light in the Cracks

Through her work, she found that these practices can create “natural examples of awe, wonder, and hope.”

“When I sit with clients and hear their stories, my role is to be a vessel,” she said. “I’m not expected to have the answer. What I do know is that at the end of the day, there is a tomorrow.”

Crebbin said in spite of the Sandy Hook tragedy, there isn’t a “dark cloud” that sits over the Newtown community.

“We have hope,” he said. “We’re trying to be a little more authentic. We admit that we’re cracked, but we admit that there is light that gets into those cracks, and I think that’s a gift that was given to us.”