It was born in 1964 as a division of the Graduate School of Education, focused on preparing leaders in religious education, with a graduating class size of 24 and three Jesuit faculty members. Five years later, GRE became its own graduate school within Fordham University. Since then, it has taught more than 2,300 students with unique backgrounds and goals, from a Muslim imam who commutes to class from Florida, to a local pediatrician who tends to his patients’ spiritual needs, to a pastor who has helped integrate Protestant churches in the Northeast.

“The Graduate School of Religion and Religious Education is really at the heart of Fordham’s mission, and therefore its 50th anniversary is a milestone for the entire University,” said Joseph M. McShane, S.J., president of Fordham. “GRE is Fordham in microcosm: a school dedicated to inward reflection upon our values, and yet deeply engaged with the community. It is an institution at the confluence of faith, leadership, and service, enriching us all with its scholarship and teaching.”

In honor of the school’s 50th anniversary this academic year, Faustino “Tito” Cruz, S.M., the dean of GRE, is pioneering a new vision for the school.

“Our 50th anniversary is not going to be just a single event, but rather an ongoing ritual that marks the reclaiming of our vision to be in relationship with the community,” said Dean Cruz, who recently initiated a new partnership with Aquinas High School, an all-girls Catholic school in the Bronx. “This initiative, as well as others, will I think allow us to remain relevant for the next 50 years.”

In light of the COVID-19 pandemic, the initiative will take on a new shape. Dean Cruz said he is hoping to co-host video conferences with Aquinas to discuss issues and challenges the students may face, including food, housing, healthcare, and educational technology insecurities.

He said he also wants to address the psychosocial and spiritual impact of the pandemic on the lives of faculty, staff, and students.

“It is during an unprecedented time like this that the word ‘partnership’ must be authentically embodied and intentionally put into action,” Dean Cruz said.

GRE offers a dozen programs, both in-person and online. Over the past few decades, the school has also developed global partnerships with several schools, including Ateneo de Manila University and Catholic University of Croatia.

“Father Tito Cruz has provided outstanding leadership as Dean of the Graduate School of Religion and Religious Education. The school offers students a breadth of innovative degree programs—ranging from pastoral counseling and ministry to religious education and spiritual direction—all to prepare its graduates to lead lives of solidarity, service, and justice,” said Dennis C. Jacobs, Ph.D., provost and senior vice president for academic affairs.

The school’s alumni come from more than 20 countries around the world. GRE’s online students live as far away as Hong Kong, Taiwan, the Philippines, and the U.S. Virgin Islands.

“I wish I had a stamp collection. We have literally placed the University’s name around the world,” GRE’s first dean, Vincent Novak, S.J., once said.

Members of the GRE community at a recent event

Most students who enroll at GRE are already teachers, scholars, or practitioners. After receiving their Fordham degree, many of them return to their native countries to put into practice what they’ve learned, as was the case for Imelda Lam, a Catholic school curriculum developer from Hong Kong, and Maria Echezonachukwu Dim, IHM, a youth program director in Nigeria.

“More than perhaps any other school of the University, [GRE] represents the University’s religious tradition and its wide-reaching international interest,” said the late Joseph O’Hare, S.J., president emeritus of Fordham, on the school’s 25th anniversary. “Its alumni/ae, although small in number, but growing, are at work in many corners of the world, carrying the Fordham tradition with them.”

The school’s students and alumni also practice a myriad of faiths and spiritualities. Among the student body are Coptic priests, rabbis, and an imam.

For Rachelle Green, Ph.D., an assistant professor of practical theology and religious education, it’s a one of a kind experience.

“GRE has some of the most diverse classroom populations that I’ve ever had the opportunity to teach in or learn from,” Green said. “I’ve been in a classroom with Catholics, Protestants, Jews, Muslims, and we’re learning that not in spite of, but because of our religious beliefs and differences and experiences, our learning environment is becoming enriched.”

The Changing Face of GRE

Green, an African-American woman and Protestant who has directed a theological studies program in women’s prisons, is among two new faculty members who were hired last year. The other is Steffano Montano, Ph.D., a first-generation Cuban American who specializes in anti-racist pedagogy and leadership.

Their backgrounds have made a difference in the classroom, said students.

“[Dr. Green is] an African-American professor from the Baptist tradition. That’s my tradition; that’s my culture. I absolutely can relate to her from that context, which I haven’t had at Fordham in the past,” said Janiqua Green, a minister and doctoral student in religious education who lives in Harlem. “It’s just a different voice that I’d never really been introduced to before.” 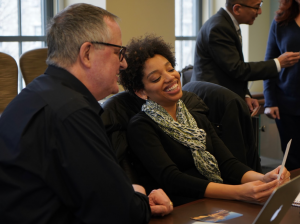 In addition to professors, students of color have grown in number. Among them is Joanna Arellano, an online master’s student in Christian spirituality who lives in Chicago. She works as a press strategist for the National Domestic Workers Alliance and serves as a board member of the Coalition for Spiritual and Public Leadership, a grassroots nonprofit that addresses local injustice. She first learned about GRE through her husband, a 2018 graduate of the doctor of ministry program. A few months after her husband’s graduation, Arellano and Dean Cruz connected over breakfast in Chicago, one of the many cities he visits to recruit students.

“Just hearing from Tito that he’s been on this path toward recruiting more professors and students of color—especially women of color—that, for me, resonates deeply,” Arellano said.

Over the past five decades, GRE has developed courses that address a more diverse population: Ministry with Latinxs, Women Mystics, Meditation East/West. They are now part of a curriculum that is challenging GRE’s students to face the world, said Rachelle Green, an assistant professor.

“What does it mean to teach in a world where, quite literally, the world was burning [in Australia]? Or to teach in a world where gun violence is common?” Green asked. “Our students are challenging us, and the world is challenging us to respond with the best that we have to our current crises and age, but also to prepare our students to respond for what we maybe can’t even predict will come.”