skip to main content
Return to Fordham University
You are at:Home»Colleges and Schools»Fordham College at Rose Hill»Teaching the Class of 2032
Fordham is the aspirant college for students in Kristen Guzman’s second grade class. Photos by Tom Stoelker
It was Friday “Funday” at Harlem Success Academy. Kristen Guzman, FCRH ’16, GSE ’17, stood at her second-grade classroom door greeting each student with a smile, a “professional” handshake, and a directive to begin their morning work. 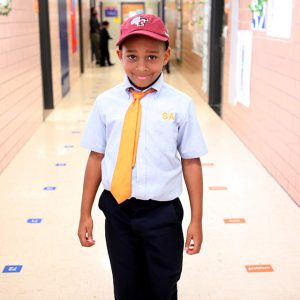 Less than one year ago, Guzman earned her master’s degree from the Graduate School of Education(GSE); a year before that she’d graduated from Fordham College at Rose Hill, where she was a George and Marie Doty Founder’s Scholar. And yet, despite being less than six months on the job, she exuded the confidence and authority of a teaching veteran.

She credits the Five-Year Integrated Teacher Education Track with getting her acclimated to daily life in a classroom.

“The undergraduate program blends right into the graduate program,” she said. “When you’re an undergrad, the focus is on getting you comfortable being in classroom three days a week at different grade levels, so you can think about which kids you blend well with and where you’ll teach best.”

She said that’s how she realized that second and third grade were the right fit for her.

“Second and third grade is fun for me because they’re still small and they still love school,” she said. “A lot of middle schoolers are a bit too cool for school, whereas these younger students still have an innocence about them that’s really special. They love learning about the world and themselves.” 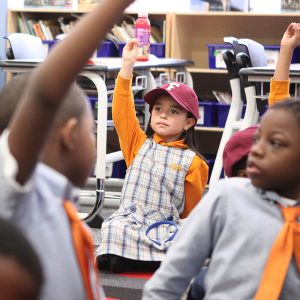 Guzman, who is the first in her family to graduate from college, said that she discovered her passion for teaching as a sophomore through the Fordham chapters of Generation Citizen and Jumpstart.

“Those clubs put us in classrooms that really opened my eyes to the inequity in New York City classrooms,” she said. “I was assigned to a classroom that used old textbooks, whereas other school districts like the one I went to have iPads and tablets.”

She said that as first-generation college student, she values education and wants to make sure students of all backgrounds get the same chance she did. She said she was thankful that she received the needed scholarships to make it happen.

“I wouldn’t be in this classroom if I hadn’t received the [Joseph C.] Zoller scholarship,” she said. “What’s unique about that scholarship is that it’s a community of teachers, so there were teachers who were really interested in my development and offered tips and tricks about being in the classroom all day, every day.”

GSE also gave her the theoretical underpinning that helped develop her approach to creating a “community of learners.” 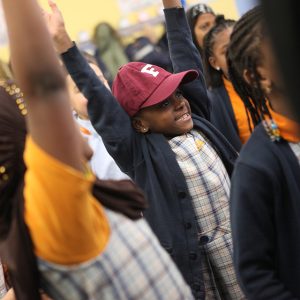 “When a lot of us were in [middle and high]school, we learned the procedures of things, ‘You do this, and you do this next, and then this next,’” she said. “That is fine—if the questions and the problems always look exactly the same. But when they don’t, that’s where procedural teaching falls short.

“At Fordham, I learned concepts of teaching, such as ‘Why this works,’—and that pushes a student to think at a deeper level and a conceptual level.”

Such conceptual thinking doesn’t stop at the three R’s, however. It extends to getting the students to envision going to college, too. At the back of her classroom, Guzman has Fordham pennants and Fordham Ram gear. Each homeroom at Harlem Success Academy has an aspirant college, usually the teacher’s alma mater.

“They love to hear why Fordham is important to me, and that gives them a concrete impression of college,” she said.

And for those that make the trek from Harlem Success Academy to the University’s campuses, they’ll be in the Fordham Class of 2032.