skip to main content
Return to Fordham University
You are at:Home»Business and Economics»Respect and Praise Are Key Ingredients for a Happy Workplace, Says Bill Baker
Photo by Bud Glick
It seems intuitive that a boss should be respectful. But rather than rely on that assumption, a Fordham professor visited 21 companies across the country, from American clothing business Patagonia to the aptly named Big Ass Fans, to find out what “respect” really looks like—and how much of a difference it can make. 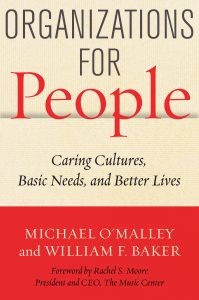 Their findings are backed by more than 450 citations and months of interviews. They spoke with executives, human resource workers, and other employees from companies that have been cited as “best places to work.” Their questions focused on how the companies put their employees’ interests and needs first—an increasingly important task in today’s corporate world, said Baker.

“[These are] times in which more and more people are less and less satisfied with their work. There are statistics like 36% of employees say they have dysfunctional managers; 75% of workers say their boss is the most stressful part of work,” Baker said in a phone interview. (He offers more detail in a Stanford University Press blog post.) “And we wanted to see, one, if that’s the case, and number two, if there are examples where that’s not the case and how they are doing.”

Baker and O’Malley transcribed their findings in their new book. In less than 200 pages, they focused on how managers can create a healthier and happier working environment over the long haul.

“One method that I’m a big believer in is the German word ‘vergonnen,’” Baker said. “It means celebrating other people. When something good happens to somebody in your company, celebrate it. Celebrate them.”

Another strategy is paying attention to people’s basic needs—for example, their lives outside of work, he added.

“There may have been all kinds of things that happened to you over the weekend. You may have had a sick mother; you may have had an accident. You may have performed in a play and been a big star. And if somebody doesn’t pay attention to the fact that you are unique and special and have your own needs, then you won’t thrive at work. And if you can’t praise and accept people, and if they can’t feel empowered, then they won’t deliver to their maximum capacity—it’s that simple,” Baker said.

The people who will find the book most useful are corporate managers from companies, both big and small, and students training to become managers, said Baker. But the book is valuable for “leaders at all levels,” said Donna M. Rapaccioli, dean of the Gabelli School of Business.

“Leaders are looking for simple, impactful practices that they can implement—and this book is filled with them. By demanding better leadership, this timely work lays out human-centered processes and practices that leaders at all levels can use to meet business goals,” Rapaccioli wrote on the book’s back cover.

Baker and O’Malley aren’t the only ones embracing the idea of a people-centric workplace. A recent statement from the chair of Business Roundtable, a group that represents “the most powerful CEOs in America and their thinking,” according to The Chicago Tribune, asked corporations to put people before profits.

“Respect is really the way to manage people,” Baker said. “And if America is going to succeed, it’s going to have to start thinking about management in that way.”