skip to main content
Return to Fordham University
You are at:Home»Education and Social Services»Newly Designed Ed.D. Puts Practice over Theory

The Ed.D. has existed for almost a century. But over the past decade, a pioneering group of educators—including Fordham scholars—have been redesigning the way it works.

Collectively, these scholars form the Carnegie Project on the Education Doctorate, a consortium of educators aiming to improve the Ed.D., a doctorate in education, and spread the new system to schools across the nation. Instead of concentrating on research, the newly designed doctorate emphasizes practice-based work that can help leaders in education—particularly principals—transform school districts and communities. Behind the project are more than 100 colleges and schools of education across the United States and Canada, including Fordham.

After joining CPED in 2012, Fordham’s Graduate School of Education redesigned its 53-year-old doctorate of education in educational leadership, administration, and policy—its only Ed.D. program—to follow CPED’s new structure. The Ed.D. program is now in the second of three development phases: “implementing,” meaning the program is in progress, but has no graduates yet. It will most likely reach the “experienced” phase when its first cohort under the new framework graduates in 2021.

The problem with the old Ed.D. was that it was too similar to the Ph.D.—too research-based, without enough time to tackle real problems in the students’ local communities, said Fordham educators and students.

“The Ed.D. is like the gold star in education, particularly for practitioners [in K-12 school systems]. The Ph.D. is the gold star for researchers and people [in higher education], but for practitioners like myself, you have achieved the gold star if you get an Ed.D., particularly from a reputable, accredited university,” said Ainsley Rudolfo, a member of the first student cohort under the new framework and executive director for programs and partnerships at the New York City Department of Education. 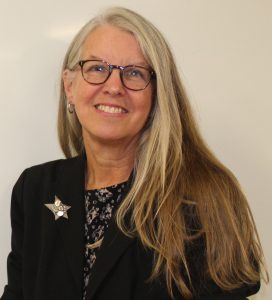 The new Ed.D. emphasizes social injustice and encourages students to tackle a persistent problem in their field. The students’ final project, the “dissertation in practice,” focuses on “a complex problem of practice that school and district leaders face and the investigation and solving of those problems,” said Margaret Terry Orr, Ph.D., director of Fordham’s Ed.D. program and associate professor in educational leadership, administration, and policy.

“You use research to investigate the problem or practice, but it should be an authentic problem that you face in your school or district. It’s not just some theory-driven idea,” Orr said. “The benefit is that you are really preparing leaders who are able to transform schools, districts, and communities in support of student learning.”

The revamped program also stresses the importance of “improvement science,” an academic approach that uses six principles to improve teaching and learning.

“It fits so well with the day-to-day workings of being an administrator in a school. Every day, you have problems to solve,” said Trisha Nugent Fitzgerald, a member of Fordham’s first student cohort under the new Ed.D. and a principal in Pelham, New York. “Improvement science has you drill down to figure out what the root cause of the problem is, what’s feasible and within your realm of being able to fix in your district or school, and then trying out interventions, looking at the data, and then revising your solution and your intervention until you reach something sustainable that works over time.”

Fordham is also collaborating with the Carnegie Foundation on the Improvement Leadership Education and Development (iLEAD) project, an initiative aiming to integrate improvement science principles into leadership development and educational practice. Fordham is among 12 universities chosen nationwide to collaborate with CPED on this project.

Fitzgerald said she picked Fordham’s Ed.D. program because of its new emphasis on “theory in practice.”

“You go to work every day and you have to solve your problems and make your schools and your districts better—how do you do that? That theory in practice was really important to me,” said Fitzgerald, principal of Hutchinson Elementary School.

Her school serves students from kindergarten through second grade, including a small group that was performing poorly in mathematics, she said. She and her colleagues initially thought the issue was they didn’t have enough math support. But after considering the improvement science model, she said she found a potential solution.

“Being able to uncover what the data was actually talking about and pointing to different curricular pieces and interventions that classroom teachers could do, it wasn’t that we had to spend millions of dollars hiring somebody,” Fitzgerald said. “We just had to tweak a little bit of the way we work.”