skip to main content
Return to Fordham University
You are at:Home»Education and Social Services»International Students Experience New York At Fordham
IALC participants, GSE graduate students, and IALC staff stand in Times Square. Photo by Li Ang
For 10 days, a group of international students had a taste of what it’s like to be a New Yorker.

Fordham’s Institute of American Language and Culture hosted nine Chinese students at the Lincoln Center campus from Jan. 21 to 30 for its second annual Winter Institute—a language immersion program that helps participants sharpen their English language skills both inside the classroom and on the streets of New York City.

“These programs offer such a rich opportunity to showcase the best of New York and Fordham’s unique position in this city,” said Amy Evans, IALC’s associate director. “We love being able to share both with people from all over the world.”

For many institute participants, this trip is often their first time visiting an English language-dominated country. Evans said students, including this season’s participants, have told her it’s a chance for them to practice English in a native environment. Another reason why people join the annual institute is its quintessential location. 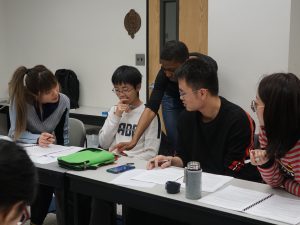 “There’s also the pull of New York City—a truly iconic place that symbolizes so much to so many people,” she said. “It’s American culture, but, like every mega-city, it has a culture, a history, and a social fabric that really are all its own.”

The past participants’ homes span across the globe: Taiwan, Guatemala, Norway, Vietnam, and Italy. But most of them hail from China, thanks to IALC’s partnership with Northwestern Polytechnical University, a public research institute in the city of Xi’an. And this year was no exception—all nine guests are NPU students.

One of them was Ewuer, a 22-year-old Mongolian-Chinese student from Xinjiang Province. (It is custom for Mongolians to have a single name.)

She came to New York to experience the archetypal American lifestyle she had seen in movies and TV shows, to improve her English language skills, and to help her confirm that she wants to earn her master’s degree abroad—perhaps in the U.S.

January 21 was her first day on American soil. In a way, it’s an adventure she has prepared for since the first grade—when she started learning English. But it wasn’t until now that she actively practiced speaking the language she had learned since she was a child.

“My English is more fluent than before,” Ewuer said. “I can make sentences more easily.”

So could Zhiyuan Shao, an 18-year-old student from Zhejiang Province. He described the Big Apple as one of the most famous cities in the world. When Shao was a child, he considered New York the capital of the U.S., rather than Washington, D.C. After watching The Wolf of Wall Street, he wanted to visit the city even more.

He got to try out his new language skills during a conversation with a stranger while they were standing on a subway platform.

“We complained about the subway,” Shao said, chuckling. “They say it’s terrible.”

Their improved English skills owe thanks, in part, to a curriculum co-developed by Fordham students. With their mentor, Hie-Myung Jo, Ed.D.—an IALC curriculum and instruction specialist and a professor in Fordham’s Graduate School of Education (GSE)—seven international Chinese students in GSE developed and compiled learning materials for the IALC participants.

“It’s a great opportunity for them to practice the real language—not just textbook English,” Jo said.

In a GSE class last semester, Jo and her seven GSE students created an intermediate-level curriculum centered around three themes: urban environment, arts and technology, and people and society. They researched online reading resources, brainstormed off-campus trips, and designed activities that would help the IALC participants practice their English. A few months later, they completed their final product—a 71-page welcome packet and workbook.

In the mornings, the IALC participants worked on the booklet. They completed fill-in-the-blank worksheets about the history behind New York City’s boroughs, read and analyzed excerpts from immigrant memoirs, and contrasted the 9/11 attacks with the 2008 earthquake in Sichuan. 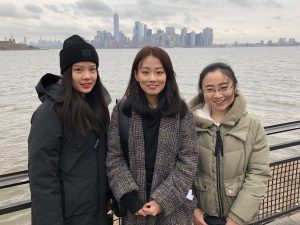 In the afternoons, they embarked on excursions that linked their classroom lessons to reality. Destinations included the Museum of Chinese in America, the United Nations, and Ellis Island. They were often accompanied by the same GSE students who helped develop the curriculum, like Ruiqi Shang, GSE ’19.

“We always ask them, ‘How are you feeling? Do you think it’s very helpful for you to practice the things you learned during the morning?’” Shang said.

The students had two main assignments: Maintain a video diary with their smartphones; record themselves speaking in English during a trip outing—introducing the venue, describing their emotions, freely speaking about how they feel—and share it with their teachers and peers. And, keep a list of new vocabulary words they encountered, the definitions, and a sentence that correctly used each word.

One of the new words that Ewuer learned was “replica.” But what’s bigger than her list of vocabulary words is what she’s experienced over the past 10 days.

Ewuer recalled seeing the city skyline from the Empire State Building at night, watching the seagulls by Coney Island Beach, and drinking in the hecticness of Times Square. She said she’s still not used to drinking iced beverages in American restaurants (in China, she quipped, they always serve warm tea.) But packed in her suitcase are souvenirs from America—designer clothing and bags for her family, U.S. currency, Fordham mementos—and 10 days’ worth of memories.

“I never thought I could be here,” she said. “It’s a dream come true.”