skip to main content
Return to Fordham University
You are at:Home»Education and Social Services»GSE Students Visit Kenyan Schools
Photos courtesy of Diane Rodriguez, Ashley Rodriguez, Eileen Interiano, Aurora Sanchez, and Diana Baca
Six Fordham students and a professor building a school in Kenya visited the African nation to mentor children of all ages and learn about the country’s education system.

“The trip was an educational immersion experience to work and collaborate with educators in Kenya and teach students who are underprivileged with limited resources,” said Graduate School of Education professor Diane Rodriguez, Ph.D., who spearheaded the spring trip. “It’s part of the University’s mission of cura personalis.”

For 12 days in early May, the graduate students learned about classroom instruction and curriculum in Kenya, where the majority of children attend primary school, but nearly half of the country’s population lives below the poverty line. Through visits to four Kenyan schools and one university, the GSE students put into practice the teaching and counseling skills they had learned at home. And through conversations in English and a smattering of Swahili, they found solidarity with students and educators in a foreign country.

The Kenyan children were curious about what life was like in America. Interiano said they peppered the Fordham students with questions: “What does the currency look like?” “Who’s the biggest fashion designer?” Another student, whose school housed farm animals, asked, “Are there cows in New York?” 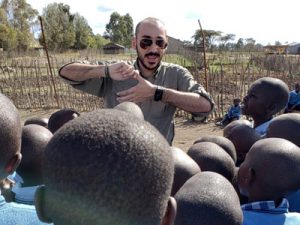 The six students not only answered their questions—yes, cows do live in New York—but also weaved lessons from their GSE instruction into Kenyan classrooms. At St. Jude Academy, a school where students spoke both Swahili and English, Interiano taught sixth-graders how to make their sentences more expressive.

“Instead of just saying, ‘A man and a woman are getting married,’ [I would suggest] ‘A beautiful bride is marrying a groom,’” said Interiano, who plans on becoming a bilingual elementary school teacher.

Another Fordham student said she used her training from a GSE career counseling course—particularly a lesson on the power of social media—to help Kenyan students chart their own career paths.

“We had a conversation about [what they do on]social media,” said Chelsea Bowens, a master’s student in school counseling. “They like to look at celebrities. So [I told them] you can also use it to explore your interests and find out more about your career options.”

The two cities they taught in—Eldoret and Nairobi—embraced them with open arms, said the GSE students. As they drove from school to school, they waved from their bus window to local townspeople in the streets. Outdoor vendors ushered them inside their stores with a simple Swahili greeting: “Jambo!” And school administrators welcomed them with doughy pastries and roasted nuts. 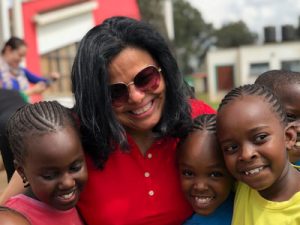 Kenya reminded them of home, too. Eileen Interiano, a GSE master’s student from Long Island, said she saw buildings as high as Manhattan skyscrapers, though these were bordered by palm fronds instead of oak tree leaves. The city streets were filled as early as 6 a.m. and as late as 9 p.m. And the food—rice, potatoes, boiled cabbage, chicken, and a flaky, fried flatbread called chapati—reminded Interiano of her native Hispanic cuisine.

“Kenya makes you feel like you’re at home. They welcome you, even if they’re strangers,” Interiano said. “And the kids … they just fill your heart with so much love.”

An Inside Look at the Kenyan Educational System

But the trip wasn’t all about teacher training. Several GSE students said their 12 days in Kenya also showed them the need for equal education in many local schools. They spoke with professors from the Catholic University of East Africa about how many girls don’t continue their education past primary school, particularly in some rural areas. They often cease schooling because their families aren’t able to afford their academic fees or because they’re married young, the GSE students said.

In her journal entries from Kenya, Bowens wrote about meeting a young woman living in the “slums” who, unable to afford school fees, made a living as a housegirl. And Interiano recalled meeting an eighth grader named Valerie—a girl with dreams of becoming a doctor.

“Just being with her for a couple of minutes … it made me emotional,” Interiano said. “I hope that she continues her education. What breaks my heart is sometimes they lack the money or support to get there.”

Bowens, who is working toward becoming a school counselor in a Title I school in the U.S.—a school where the majority of students come from low-income families—said her mentorship experience in Kenya has made her more aware of the different factors that can affect children’s lives.

“As counselors, we sit and talk to the students. The teachers might not see the whole picture, but we’re trying to get the whole picture,” Bowens said. “There’s a child, yes. But behind that child is the parents, schools, teachers, their physical environment, and their mental [environment].”

In 2016, Rodriguez, a GSE professor in the Department of Curriculum and Teaching, founded Every Girl Is Important, a non-profit organization that promotes the education of underserved girls around the world, particularly in Kenya. For the past few years, it has been working to raise $100,000 to build a boarding school for girls ages 11 to 17 in rural Eldoret. The organization has now reached nearly 80% of its original goal, and will commence construction once the total amount has been raised, said Rodriguez, who also spoke in a recent interview aired on TV network Telemundo. 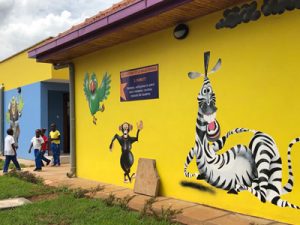 Part of the reason why the GSE team visited Kenya this year was to prepare for the new boarding school, said Ashley Rodriguez, a Ph.D. student in school psychology at GSE.

The trip also motivated the GSE students to think about how their time in Kenya will shape them as future educators. For Interiano, it means giving her students—both boys and girls—the same opportunities.

“I want to make sure that wherever I teach, kids are getting an equal education,” she said.