That’s the beginning of the first episode of End Book Deserts, an Apple podcast created this past summer by Molly Ness, Ph.D., an associate professor in curriculum and teaching at Fordham’s Graduate School of Education.

She started the project, she said, to shed light on the fact that in low-income areas, books are often scarce.

“We have all this academic work [on book deserts], but most people don’t read academic journals. So I started the podcast as a way to raise awareness around this reality,” Ness said. “We can create a nationwide conversation about this.”

Since July, the podcast has grown to 26 episodes and featured several famous guests, including Newbery Medal awardee Jason Reynolds and Major League baseball player Sean Doolittle. The listenership on End Book Deserts, which is found on Apple Podcasts, has been growing by up to 20% month-on-month, Ness said. In a recent interview with Fordham News, she spoke about book vending machines and school bus libraries, how she was able to collect 10,000 books for donation, and an inaugural conference she plans on hosting in Chicago later this year.

What inspired you to create End Book Deserts?

I’ve always been interested in book access. But the statistic that 32 million American children today don’t have access to books in their homes, schools, and communities really made me angry. That anger turned into action with the podcast and the work around it.

And you mentioned there was another statistic that spurred you into action.

Last summer, I read a number of research articles by Susan Newman, a former U.S. assistant secretary of education and current professor at New York University. Dr. Newman found that in Washington, D.C.’s Anacostia neighborhood, which has a poverty level of 61%, 830 children would share a single book, whereas children in Capitol Hill had 16 times as many books. The huge disparity between book access in a high-income area and a low-income area really shocked me. Our goal in literacy education is to develop kids as lifelong readers, and that’s almost impossible if one of their most important tools isn’t available to them.

Who are some of the featured guests on your podcast?

I have interviewed New York Times best-selling author Jason Reynolds, who is now the National Ambassador for Young People’s Literature. A couple of weeks ago, I interviewed Sean Doolittle, the closing pitcher for the Washington Nationals, who won the World Series last year. He is now the national ambassador for independent bookstores and really brought reading to the forefront of a lot of people’s visibility.

What are some of the creative ways your guests have brought books into low-income communities?

Every summer, JetBlue Airlines chooses a low-income portion of a city and creates these book vending machines. They buy tons of brand new books—the top reads, the most popular ones for kids—and put them in a particularly high-traffic area. Kids can go up and take as many books as they want. I’ve also featured educators who have transformed dilapidated school buses into libraries and then spent their summer weekends driving into low-income areas and giving books to kids in their homes and communities.

More people are doing this work than we originally thought, which is a good thing. But we have to get their stories out there so that other communities can take their approaches, learn them, modify, and replicate programs all across the country.

Tell me about the power of a book. How can it change a person?

We know how they build our vocabulary and our comprehension. But more importantly, books build us as human beings. As we visit characters, stories, times, and places that are different than our own, we build the social skills of empathy and understanding and compassion—which, goodness knows, our world needs now more than ever. Books inform us and they transport us. Books shape our paths. So, the power of a book—and the power of the right book at the right time in the hands of the right reader—is transformative.

Growing up in Baltimore, you were an avid reader. So were your parents.

They had book clubs—they’re still in the same book group that they’ve been in for 40 years. This is long before Oprah made book groups cool. I remember the nights that they would have a book club, complaining that the adults were making a whole lot of noise past my bedtime, but secretly eavesdropping and getting the extra desserts they would sneak up to me. I also remember my mom dropping me off at the public library in the family Volvo station wagon and the name of the librarian from my elementary school. Libraries and books were second nature to us. Unfortunately, that’s not the case for too many kids today.

What is the one book that really transformed you as a person?

This August, you’re hosting “Literacy Warriors United,” the first-ever conference on book access as a topic of social justice, at a book bank in Chicago for two days.

We are bringing together people from all over the country who are doing this work, including Dr. Newman. The hope is to foster collaboration, conversation, and to push forward a national conversation about book access. So far, we’re expecting around 300 people. 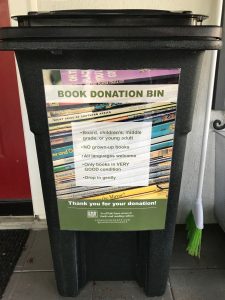 Since 2019, you’ve distributed 10,000 used books to Title 1 schools and community projects in Westchester and the Bronx. How did that happen?

Last August, I posted on my local Facebook group that I was collecting gently used children’s books through a recycling bin on my front porch. We call it the Porch Project. My fourth-grade daughter and I go through every single book and check it for readability. We want books that are attractive, engaging, relevant, and high quality. We have about 20 different Tupperware bins that we use to sort the books. We’ve donated these books to about five different community centers, schools in the Westchester area that are low-income.

How can people who read this article help increase book access?

Connect with the book banks that are out there. Make a $20 anonymous gift on DonorsChoose to, for example, a fourth-grade teacher in Kansas who can’t afford a classroom library. If you don’t have the money, you can donate time to sort books and bring books into schools.

Sometimes when we look at the world and see there are so many issues—the environment, society issues, poverty—it can become very overwhelming. You think, how can one person do anything? But the issue of book access is addressable.

Visit https://www.endbookdeserts.com/ to find out how you can get involved.

This interview has been edited and condensed for clarity.