skip to main content
Return to Fordham University
You are at:Home»Colleges and Schools»Graduate School of Education»At GSE, an Aspiring ‘Dr. Phil of Sports’
Siripipat covering the US Open for IBM at the Live X Studio in Manhattan this year. Photos courtesy of Prim Siripipat
When Prim Siripipat retired from a sport that had defined a decade of her life, she felt like she’d lost her identity. She developed an eating disorder and battled it for years, until she met a person who changed her life: her therapist.

“She was able to uncover so many things—not just about playing tennis, not just my identity and retiring, but also coping with my performance as a broadcaster, helping my relationships with my family, my partner, and friends,” Siripipat said. “She was able to open up my world and transform so many aspects of my life.”

“As mental health continued to [gain in]awareness and athletes became more outspoken about it, I saw a tremendous need for there to be somebody that could tap into different realms,” said Siripipat. “My goal is to blend my broadcasting experience, athletic experience, and my eventual counseling psychology training to be the Dr. Oz or Dr. Phil of sports.”

A Tennis Star from Missouri

Siripipat began playing tennis at age 7. A decade later, she became one of the top 10 junior players in the United States. Her dream of becoming a professional tennis player was slowly becoming a reality, but in her junior year at Duke University, where she played on the women’s tennis team and amassed a 44-15 overall singles record and a 17-2 Atlantic Coast Conference singles record, her knees and right shoulder became worn from years of overuse. Three surgeries later, Siripipat realized her childhood dream was no longer possible. But she stayed close to the world of sports, which she had come to know and love.

“If I couldn’t be an athlete, at least I could continue to be around and cover athletes,” said Siripipat, who turned to sports journalism. “[Broadcasting] reminded me and felt so much like sports. There’s light and there’s just that live element and adrenaline rush and pressure.”

From the Court to the Studio

For 17 years, Siripipat has worked as a sports anchor, reporter, and news producer at TV stations across the East Coast. She spent six years at ESPN, where she anchored televised shows like Sports Center and covered the Super Bowl, NBA playoffs, and Wimbledon; she also co-hosted “Spain and Prim,” with Sarah Spain; it was one of the first national sports radio shows to be hosted and produced by women. Siripipat also hosted “The Next Chapter” podcast at The Athletic, a subscription-based sports website, where she interviewed athletes about their retirement experience.

In recent years, she has been nurturing another dream. Siripipat, who has a bachelor’s degree in sociology from Duke and a master’s degree in counseling psychology from the University of Missouri-Columbia, has always been passionate about psychology. It started with her personal struggles and expanded as she witnessed other athletes face mental health challenges. At ESPN, she helped launch a podcast called “Inside Out,” where athletes reflect on the psychological and social impact of sports. After receiving her master’s in 2018, she realized that if she wanted to reach the same level as her role model—Dr. William D. Parham, the first-ever director of mental health and wellness for the National Basketball Players Association—she needed to earn her doctorate.

Encouraging Athletes to Speak Out and Seek Help

A year ago, she set her sights on Fordham’s doctoral program in counseling psychology at the Graduate School of Education. 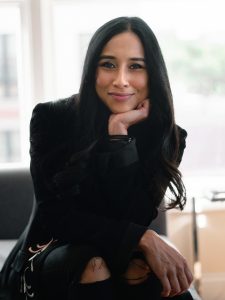 “The program and a few of the faculty members were in the space of what I was interested in—career transitioning, identity loss, retirement. The faculty themselves are very competent, but they also seem to have similar personalities to mine. And the diversity—just being embedded in Manhattan, I think is huge,” said Siripipat. “It was the perfect place.”

On May 15, she shared the good news of her Fordham acceptance on her Twitter account that has nearly 30,000 followers: “Fordham was my No. 1 choice for a host of reasons … I’m excited for The Next Chapter & to share it with all of u!”

This semester, Siripipat says she’s been learning about “group counseling, psychohistory, multiculturalism in Dr. Ponterotto’s class, racial issues, social justice issues, [and]hidden biases,” and she plans to bring those lessons to today’s sports landscape and athletes past, present, and future. She also works with Jennie Park-Taylor, Ph.D., associate professor and director of training for the counseling psychology doctoral program, as her graduate assistant.

Decades from now, she hopes those efforts will pay off.

“That would be my goal: to connect the dots and meld the two worlds of sports and psychology,” said Siripipat, who wants to be a good role model for her two-year-old son. “I [hope I]would’ve transformed or helped change the landscape where athletes can not only feel comfortable about coming out and talking about their issues without being judged, but also created a space where coaches and parents are more educated about how to raise not just a youth athlete, but a happy, healthy kid.”