skip to main content
Return to Fordham University
You are at:Home»Colleges and Schools»Graduate School of Arts and Sciences»Student Historian Reveals Life From Medieval Times
Property deeds from the late 13th century, written in Latin. Photos courtesy of Grace Campagna
Grace Campagna pieces together the lives of people who lived hundreds of years ago through a sometimes tedious, yet rewarding task—transcribing medieval records.

“Many people don’t believe the Middle Ages are interesting. They only learn about that period through books, TV shows, and popular culture. But there’s so much influence on our world today that we don’t really see,” said Campagna, a master’s student in Fordham’s Graduate School of Arts and Sciences who is studying medieval studies. “Transcribing records—even property records, as boring as that may sound—is part of understanding how our modern world came to be.”

Campagna grew up on a farm in Nebraska, where she loved reading historical novels with her father. But she said she never considered history as a legitimate career path until college.

“My history classes opened my eyes to a different way of seeing the world,” said Campagna, who earned her bachelor’s degree in history from Fordham College at Rose Hill in 2020. “And Fordham has one of the best centers for medieval studies in the country. I met some incredible faculty and got involved with the community, and things took off from there.”

Signs of the Medieval Period at Rose Hill

Campagna is a project manager for Medieval New York, a Fordham-based website that identifies how the medieval period has influenced modern-day New York City. Since last summer, Fordham students have been developing itineraries that highlight parts of the city that are inspired by the European Middle Ages, including dozens of Gothic churches, as well as remnants from the pre-colonial period that are still visible today. When complete, the itineraries will feature audio guides and augmented reality recreations of New York City during what we commonly view as the “medieval period” on the website, said Campagna. 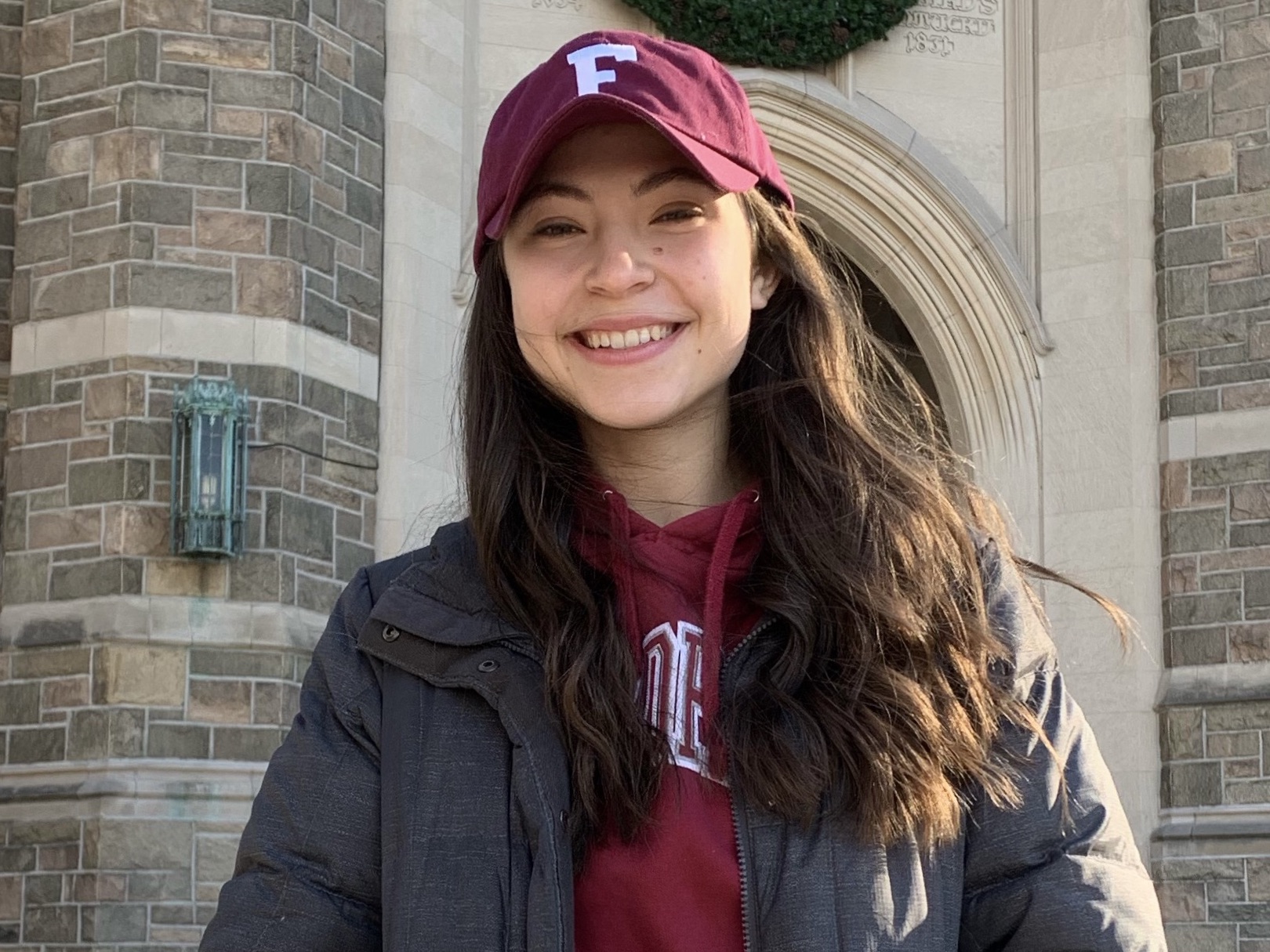 Campagna in front of Keating Hall

“A good example is the Met Cloisters, a medieval art museum in Manhattan that’s partially composed of old structures from Europe. So you have this combination of the Middle Ages and medievalism sitting in an old-growth forest in the middle of present-day New York City,” said Campagna.

The medieval period also reveals itself on Fordham’s campus, she added.

“Keating Hall is an example of medieval-inspired architecture. Fordham, Columbia, and City College of New York all have this super Gothic style with buildings meant to remind us of castles,” Campagna said, adding that Gothic style is characteristic of the Middle Ages. “A lot of people associate the Middle Ages with the birth of the university as we know it, like Oxford and Cambridge, but also with a certain kind of scholarship and history that we see as legitimate. We still pull from that architectural style in order to call back to that time and project a certain image of authority.”

Campagna is also involved with Medieval Londoners, an online catalog of all identifiable people who lived in London during the Middle Ages. She collects and organizes data and then uploads it to the main website, which is accessible to the general public.

“It’s a collective biography. This is pretty popular in medieval studies because you often don’t have a lot of information about one individual. But if you have a little bit of information about a lot of people within a certain social group, you can learn about what their lives might have been like by looking at all of them in aggregate,” Campagna said.

The Medieval Londoners project inspired her undergraduate thesis, for which she studied the lives of elite women who lived in medieval London. 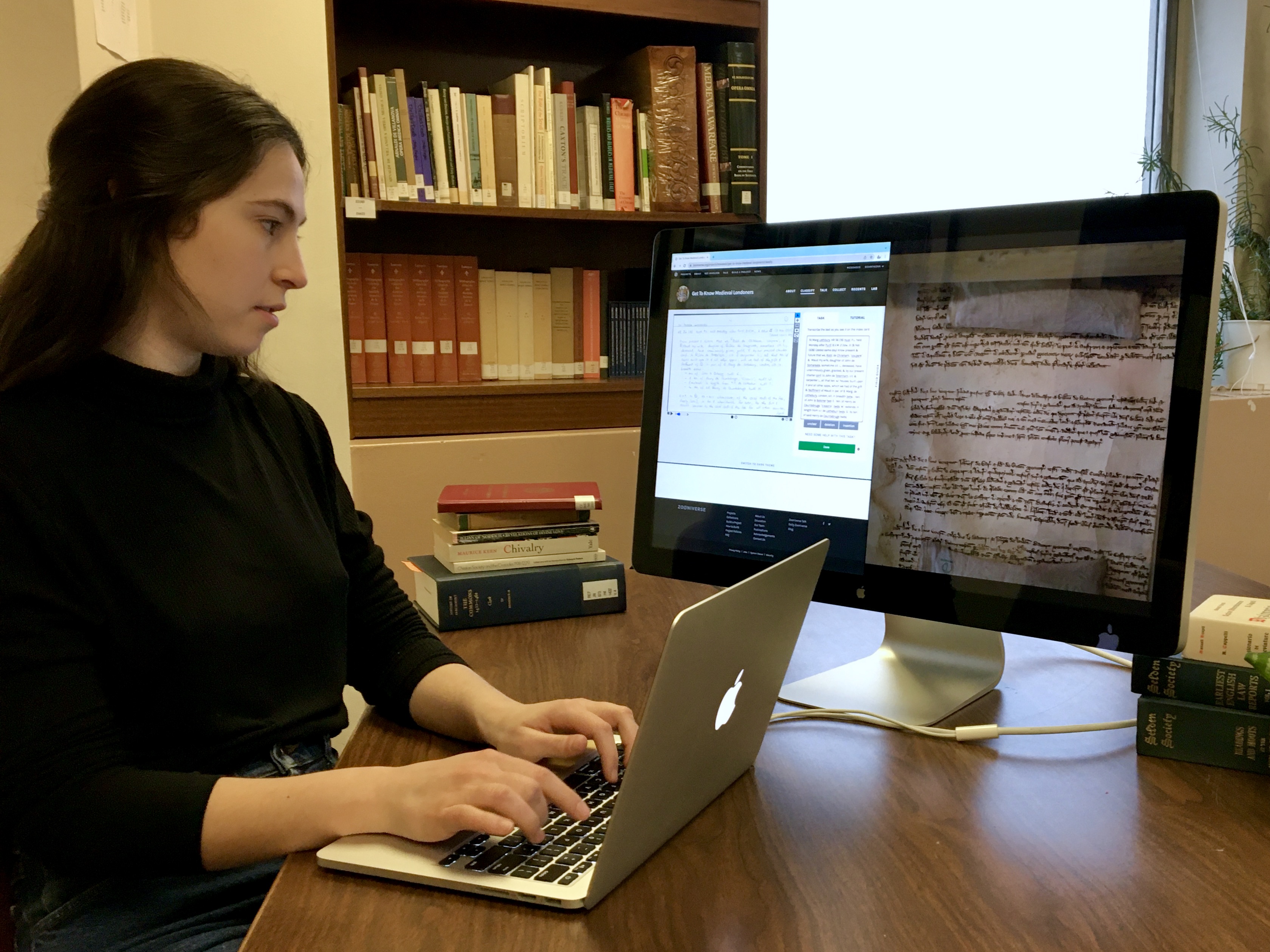 “Through archival records, I saw that when a wealthy husband died, his wife often took over their business. If she married again, her new husband could take over that business. But he needed her input because of her experience and skills,” Campagna said. “It was exciting to me that women were so involved in the economic system during this time.”

Her current master’s thesis also draws from life in medieval London. For part of her thesis, she is creating a crowdsourcing project called Get to Know Medieval Londoners, where she will train volunteers to transcribe medieval property records and collect data that will be used to better understand life in the medieval period. The data will then be uploaded to the Medieval Londoners website, which is open to the public.

“The goal is less about the actual research, and more about collaboration and accessibility. In this country and across the world, there’s all this incredible research that only other scholars will read. I think it’s valuable to make sure that this research has a wider purpose, instead of being hoarded inside the academic system,” said Campagna, who will defend her master’s thesis this summer.

“Grace is one of the first students in our program to have a formal minor field in digital humanities and to be writing a thesis squarely on a digital topic,” Paul said. “Her work is very exciting and cutting edge and points the way not only to the future of projects like these, but also the humanities.”

Founded in 1971, Fordham’s Center for Medieval Studies is one of the world’s leading centers for the study of the Middle Ages with 28 full-time faculty members, 16 affiliate faculty, and dozens of graduate students across eight affiliated departments. Fordham’s program has been a leader in the field of digital humanities since the establishment of the Internet Sourcebooks Project in 1996, said Paul. Since then, graduate students at Fordham have been involved with building and using digital research tools and platforms.

Campagna said she appreciates how the digital humanities make research more accessible to a 21st-century audience.

“I was really drawn to that format of researching history. It’s very collaborative and accessible, not just one person sitting alone in a library with a lamp, poring over old manuscripts,” she said, chuckling. “I want to keep working with medieval documents, possibly for a digital humanities center, and present them in a way that is interesting and accessible—where people can actually learn something from them.”