skip to main content
Return to Fordham University
You are at:Home»Colleges and Schools»Fordham College at Lincoln Center»Public Media Graduate Wins Prestigious Awards for Podcast on Rom-Coms
Courtesy of Looking for Violet
When Carmen Borca-Carrillo was deciding on her capstone project for the master’s in public media program at Fordham, film and television seemed like the obvious choice.

She was passionate about movies and TV, having earned her bachelor’s degree in journalism and film and television at Fordham College at Lincoln Center in 2020 and pursuing the accelerated public media master’s program as an undergraduate.

During the height of the pandemic, Borca-Carrillo said she and her partner watched a lot of romantic comedies, better known as rom-coms.

“I became a big fan of rom-coms during the pandemic because everything was awful. But what we both figured out pretty quickly—and she had kind of grown up on rom-coms and I hadn’t—was that there really weren’t many lesbian rom-coms” said Borca-Carrillo, who graduated from the master’s program, part of Fordham’s Graduate School of Arts and Sciences, in 2021.

That’s how the idea behind her capstone project for Fordham’s Master of Arts in Public Media Program, a podcast called Looking for Violet, was born. The four-part series examines why queer love stories are so scarcely told in American film comedies, while also exploring the fundamental aspects of these films and showing how those aspects relate to the niche of the lesbian rom-com.

The Importance of Representation

“We always say representation in media is important, and I hope that [listeners]take away from it a little bit more of the concrete examples of why it’s important,” Borca-Carrillo said. “It’s really harmful to see yourself represented only in a negative light … A genre like a rom-com—that’s supposed to be funny and exciting and about finding true love—there’s really just not that much representation for queer women in it.” 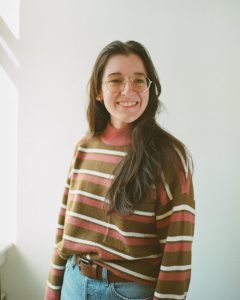 One of the things Borca-Carrillo noticed when she was starting to formulate the idea for the piece is that many rom-coms are based on the trope of men and women being different from each other.

“And a lot of these rom-coms that we were watching were just based on this kind of battle of the sexes back and forth—that men-and-women-will-never-understand-each-other kind of feeling,” she said. “And so I decided to kind of look into that and see what it would be like to have a lesbian rom-com, to have something that you felt represented by.”

But that initially proved to be difficult because Borca-Carrillo noted that there aren’t many rom-coms featuring lesbians, particularly ones that “that didn’t end terribly for the lesbians either, which is kind of another trope that I talked about in the podcast,” she said.

“A lot of the lesbian media that you will see nowadays—there’s more—but it usually ends pretty badly for the people in it,” she said.

The title of her series comes from Édouard Bourdet’s 1926 play, La Prisonnière, where one of the main characters, Mme. D’Aiguines, “uses bouquets of violets to signify her forbidden love for a housewife trapped by marriage.” Throughout the podcast, Borca-Carrillo uses a character, Violet, to explore the different aspects of rom-coms—the “meet cute,” the obstacle, the proclamation of love, and the happily ever after.

Borca-Carrillo said she aimed to use Violet to “represent a past/present/future of women/women love, one that uses its layered history to create richer meanings in future works.”

As a part of her reporting, she interviewed people like Christin Marie Baker, the founder and CEO of Tello Films, a streaming and production company that has a lesbian focus, and author Camille Perri, who wrote a book on rom-coms called When Katie Met Cassidy that is in the process of being turned into a movie. Both of these creators have been working to produce content that has been scarce, she said.

Borca-Carrillo was surprised at first that these successful creators would agree to be guests on her show.

“These were kind of shots in the dark, but what I’ve learned is that people in this community are really interested in having more things come out about it,” Borca-Carrillo said. “So a New York Times best-selling author, and the founder of lesbian film service, and countless other really cool people were really excited to talk to me because this is a really small community.”

Borca-Carrillo said their participation, along with the awards, has been amazing.

“It’s been pretty wild,” she said with a smile. “Being recognized alongside a Bloomberg podcast at the Deadline awards, where we had a speaker who was a prize-winning journalist—it was really overwhelming. I think it’s really encouraging to know that a story that is created with a lot of personal attachment to it [can be so successful]. All the guests that I interviewed really put their heart and soul into their work that they do.”

Beth Knobel, Ph.D., who serves as the director of the public media program and an informal adviser to Borca-Carrillo, said that it’s been “thrilling” to see her recognized “over and over” for this podcast.

“I am so incredibly proud of her. She’s really talented, and it’s an important time for representation. A couple of years ago, I don’t know if people would have reacted to this podcast series the way they did. People have become, thankfully, much more aware and open to a wider array of voices in journalism. And it’s crucially important that this podcast bring visibility to the LGBTQ+ community and help people see it more clearly.”

Borca-Carrillo also said that her mentor, George Bodarky, an adjunct professor at Fordham and former news director at WFUV, who is now the community partnerships and training editor for WNYC, was instrumental in helping her put this piece together.

“George helped me finesse all the different parts of the podcast so I’m eternally grateful to him and his guidance,” she said. “And I really do give the credit to the people that I interviewed, and to George and to Fordham for giving me the platform to put all of this together. … It was really formative to learn from people and to learn how much better projects can be when you really care about what you’re doing.”

Borca-Carrillo is now working as a junior producer at Wonder Media Network, which is a podcasting, women-led startup company that she said is “dedicated to lifting up underrepresented voices.” She got the job after interning at the company during the pandemic.

“It’s been really great to get better at podcasting while using all the communication skills I picked up at Fordham along the way,” she said.