skip to main content
Return to Fordham University
You are at:Home»Colleges and Schools»Fordham College at Lincoln Center»Margot B. Nadien, Professor and Noted Psychologist, Dies at 90 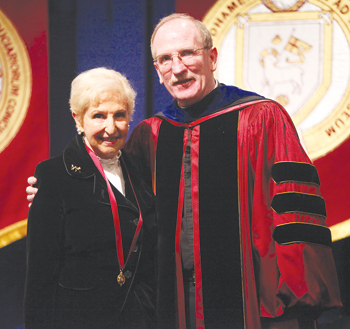 Father McShane presented Nadien with the Bene Merenti medal for 40 years of service in 2013. Photo by Bruce Gilbert

Margot Nadien, Ph.D., a psychologist, author, and professor at Fordham for more than four decades, died of cancer on July 3 in Manhattan. She was 90.

Nadien taught psychology classes at the Lincoln Center campus for more than 45 years, including a new course she developed called Aging and Society, which is still being taught today. On December 9, 1983, she and psychology professor Harold Takooshian, Ph.D., co-founded the Fordham Lincoln Center chapter of the Psi Chi Honor Society with George J. McMahon, S.J., vice president for the Lincoln Center campus. The chapter won the Cousins Award in 1993 as the No. 1 Psi Chi chapter out of 1,100 U.S. campuses.

“Among her psychology colleagues of the past half-century, both inside and outside of Fordham, Margot was widely known for her extraordinary grace, helpful attitude, and ready smile,” said Takooshian.

Margot Ballon Nadien was born on May 25, 1930, the second daughter of Lillian G. and David H. Ballon, a professor of surgery at McGill University’s Royal Victoria Hospital in Montreal. She was a pianist, performing at the national level in Canada. She moved to the U.S. as a teenager to study music in New York.

On June 11, 1950, she married violinist David W. Nadien, who was concertmaster of the New York Philharmonic for several years under Leonard Bernstein. He died in 2014. The couple lived for nearly 50 years at 55 Central Park West, a historic building near Lincoln Center.

In the early 1970s, Nadien began as an adjunct professor in the Excel Division of Fordham’s Lincoln Center campus, then taught full-time in 1974 in the college’s interdisciplinary social sciences division. In 1981, she became the first psychologist in the division to achieve tenure. In 2013, Joseph M. McShane, S.J., president of Fordham, saluted Nadien with the Bene Merenti Award for 40 years of service to the University.

Nadien was an officer in the NYS Psychological Association and the United Nations NGO Committee on Aging. Her work received many accolades during her long career, including the NYSPA Kurt Lewin Award (1995), and Wilhelm Wundt Award (2003). In the American Psychological Association, Margot was elected to APA Fellow status, based on her contributions to psychology as the author/editor of several books on diverse topics in the field, including gender, development, autonomy, and aging. She was featured in Who’s Who in America and was a lifetime member of Phi Beta Kappa, Alpha Sigma Lambda, and Psi Chi, according to former colleagues.

At Fordham, Nadien’s many colleagues and students remember her as an extraordinarily gracious, kind, and supportive person, also known for her highly structured approach to classroom teaching. Even after her retirement, Nadien continued at Fordham as an active student in its College at 60.

“Margot was an incredible woman and her foremost concern was always people—students, colleagues, and staff,” said Cira Vernazza, associate dean and director of College at 60. “Even after retirement, she continued to learn and grow, ever mindful of keeping young.”