skip to main content
Return to Fordham University
You are at:Home»Colleges and Schools»Graduate School of Arts and Sciences»Chad Davis, Doctoral Student and Rising Psychologist, Dies at 40
Photos courtesy of Norma Davis
Chad Davis, a graduate student in Fordham’s Clinical Psychology Doctoral Program who specialized in treating performing artists and patients with eating and weight disorders, died at his internship site in Las Vegas, Nevada, on Jan. 26. The cause of his death is unknown, his family said. He was 40.

“It is a tragedy to lose someone so young, so gifted, and so full of promise, especially as Chad devoted his considerable gifts to the well-being of others,” Joseph M. McShane, S.J., president of Fordham, wrote in an email to the University community. “We mourn the loss of this bright light, and keep his loved ones, friends, and colleagues in our hearts during their hour of grief.”

Davis was a doctoral intern who was scheduled to complete and defend his dissertation this August and graduate with his Ph.D. in clinical psychology. He was on a full-time internship at the University of Nevada-Las Vegas, and he had recently accepted a postdoctoral position at the University of California-San Diego. 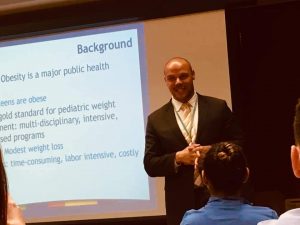 Davis delivering a presentation at an academic event

Tyler Stovall, Ph.D., dean of the Graduate School of Arts and Sciences, said the loss is felt deeply by students and faculty.

“The death of Chad Davis is a tragic and serious loss for the graduate student community at Fordham,” he said.

Davis received his bachelor’s degree in theater studies from Montclair State University and a master’s degree in clinical psychology from Fordham in 2014. Over the past 16 years, Davis touched many lives as an educator, researcher, and mentor. He served as an ESL teacher in the U.S. and abroad, a teaching/research assistant at several schools in New York, an administrator at Weill Cornell Medical College, a counselor at a California camp for overweight children and teenagers, and a volunteer at a non-profit that supported people suffering from eating disorders. As a clinical psychology extern, he counseled patients at Fordham Counseling and Psychological Services, as well as at New York University, St. Barnabas Hospital in the Bronx, and the Mount Sinai School of Medicine. Davis also founded Pipeline to the Ph.D., an initiative within Fordham Collegiate Science and Technology Entry Program (CSTEP) that provided mentorship to young psychology students of color. He wrote about his passion for mentoring undergraduate students in The Chronicle of Higher Education.

Davis stood out in his cohort of clinical psychology students, said his dissertation mentor, Mary Procidano, Ph.D., associate professor psychology. He was an energetic, engaging student with an unusual ability to integrate different perspectives in psychology to help his patients, she said. Davis wanted to better understand eating disorder-related distress, and he was especially interested in serving people from diverse backgrounds, she added. 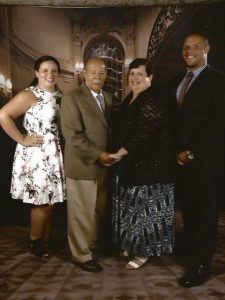 Davis with his parents and younger sister in 2017

“Not only did he have a real aptitude for looking at different perspectives in psychology, but he also had training as an actor. That really added to his insight and his ability to understand and be helpful to people,” Procidano said. “We used to have many conversations about what he knew about human nature as an actor and [as a therapist], and how to put it all together. This, to me, is the essence of cura personalis—he embodied it.”

For his dissertation, Davis, who spent several years working as a professional actor and singer, surveyed more than 200 professional and aspiring performers and explored how they were affected by eating disorders and outside pressures from the entertainment industry.

Other Fordham faculty described Davis as a friend who cared deeply about his colleagues and mentees and a therapist who was dedicated to the well-being of his patients, particularly Black and Latinx individuals struggling with obesity and eating disorders.

“Chad was an absolutely wonderful, extraordinary person and rising psychologist. His smile could brighten the hardest day, and he truly cared for everyone who came his way,” said Rachel Annunziato, Ph.D., associate dean for strategic initiatives at Fordham College at Rose Hill. “He was devoted to helping others as a therapist, scholar, teacher, and to so many as a friend.”

Davis emitted so much energy and positivity in the classroom that it was easy to gravitate toward him, said another mentor.

“He was such a bright light,” said Mónica Rivera-Mindt, Ph.D., a professor of psychology who worked with Davis when she was the director of the Clinical Psychology Doctoral Program. “He had this really beautiful smile and bright eyes, and he was really funny and engaging. He’s somebody you just wanted to be around, and everyone adored him.” 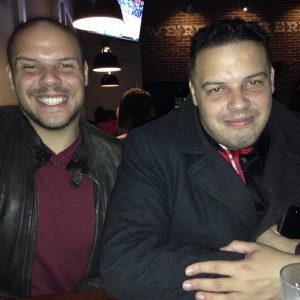 Davis and his twin brother, Bryce

Davis overcame many obstacles to practice in a field where he would help others overcome their own trials and tribulations, said Eva Badowska, Ph.D., dean of the faculty of arts and sciences and former dean of GSAS. He was also a stalwart friend and colleague who wrestled with personal challenges while continuing to support his peers, said Rivera-Mindt.

“It was a testament to his grit, resilience, and love of helping people,” Rivera-Mindt said.

Davis was born on June 17, 1980, in West Islip, New York, to Norma Davis and Ralph S. Davis Jr. and grew up on Long Island and in New Jersey. He was a fun-loving, smart child who excelled in school, played the trumpet in his high school band, and adored the arts, said his mother, Norma. In his free time, he enjoyed singing songs from Broadway shows and working out. As an adult, he wanted to help people with eating disorders because he struggled with his own weight when he was a child. He understood the challenges of maintaining a healthy lifestyle, she said. 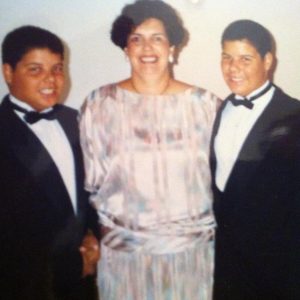 Twelve-year-old Davis with his twin brother, Bryce, and their mother, Norma

“He was very smart, very hardworking. He loved what he did, and he really wanted to help people,” Norma said. “That’s the biggest loss for us—he had so much going for him.”

But in his 40 years of life, Davis made a big impact, said Rivera-Mindt.

“We are so proud of everything that he accomplished and all the lives that he touched. He helped so many people during his short life,” said Rivera-Mindt. “And those gifts and that beautiful energy is going to live on.”

Davis is survived by his parents; three siblings—his fraternal twin brother Bryce Davis and his wife Sandy Davis, younger sister Cherise Davis, and older sister Laurie Moss; one niece; several nephews; and many cousins. Due to the pandemic, there is no immediate information yet on the burial and memorial services. This page will be updated with details as they are confirmed.

A GoFundMe site has been set up to help the family with the funeral and burial expenses.