skip to main content
Return to Fordham University
You are at:Home»Colleges and Schools»Gabelli School of Business»Three Student Veterans Recognized as Future Global Leaders

Despite 20 years of successful service with the U.S. Marine Corps, Coleen Harper approached retirement with trepidation.

“My fears of becoming homeless were ignited as I proceeded through the process of retirement,” she said. “This propelled me to make a difference rather than becoming a part of the problem.”

Today, as a student majoring in nonprofit leadership at the Graduate School of Social Service and the Gabelli School of Business, she is doing just that.  She recently founded D’ St. Aubyn’s Cause, which seeks to diminish the rate at which veterans, single parents, and the elderly fall victim to homelessness. 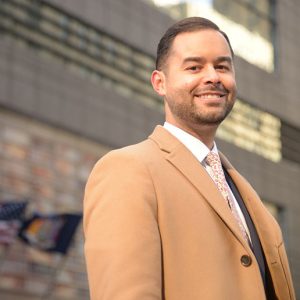 Her efforts have not gone unnoticed. She is one of three students selected to be part of the 2017 cohort of the Veterans in Global Leadership (VGL), a nonprofit program founded in 2015 by Jayson Browder, PCS ’13. The program helps student veterans prepare and apply for prestigious internships, fellowships, and scholarships. Browder was a Fulbright scholar and a U.S. Presidential Management Fellow at the White House.

Browder said most of the VGL participants have held leadership positions in the service, but may not be finding similar opportunities in civilian life.

“They’ve implemented foreign policy abroad and have been tasked with solving complex problems,” he said. “Now that they are back from the longest wars in our nation’s history, they’re looking to solve more problems and create an impact in their communities here in the states and abroad.”

Other fellowship awardees include Robert Molina and Kevin Knightes. Molina served in the Marines as an aviation logistics clerk. He is currently pursuing a double major in political science and economics. He is also the communications chief of the Fordham Veterans’ Association.

Knightes is a U.S. Navy veteran who served four years as an active duty Hospital Corpsman Pharmacy Technician. He is now an undergraduate at the School of Professional and Continuing Studies pursuing a bachelor’s in Middle East Studies, with minors in Arabic and philosophy. He is the president of the Fordham Veterans’ Association.

“I found that VGL aligned with my goal to continue service, but it will also introduce me to a vast network of like-minded people to share resources with,” said Knightes.

Harper’s said channeling her fears into starting an organization to help others has been rewarding.

“A program like VGL can certainly help make an achievement more attainable,” she said.