skip to main content
Return to Fordham University
You are at:Home»Colleges and Schools»Gabelli School of Business»Gabelli School Professor Explores the Emergence of ‘News Nerds’ in New Book

The journalism industry—particularly local news—has seen numerous changes over the past decade. Newsrooms have moved to a digital-first world, local papers have closed, smaller outlets have been bought out by major conglomerates, and social media has become the way many people get their news. In the midst of all these changes, a new type of journalist emerged, one that knows how to code, use analytics, develop apps, and more. 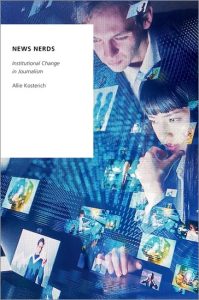 Allie Kosterich, an assistant professor of communications and media management at the Gabelli School of Business, studied this new type of journalist for her new book News Nerds: Institutional Change in Journalism (Oxford University Press, 2022).

Kosterich was working on her dissertation in 2016 when, she said, she was “just starting to see a lot of technological skills being brought into the newsroom.”

“It evolved into this general question of what does it mean to be a journalist today?” she said. “And how does this idea of a professional journalist change over time, especially within the last decade or so.”

After speaking with dozens of journalists and news executives, Kosterich said she found that the skill sets of journalists have really changed and evolved over the past decade.

“Skill sets have really changed, from the traditional definition of a journalist being someone who writes, who edits, who asks questions, things like that, to somebody who can do a lot more technologically,” she said.

Part of the reason for the growth of this field, Kosterich said, is due to external factors, such as emerging social media platforms and struggles in the industry.

“We’re facing economic difficulties, technological capabilities, social changes with audiences wanting news on demand in every device—those were probably the initial instigators, the big shocks to the profession that started this and destabilized the established practices of the profession,” she said.

In addition, Kosterich said she found that this tumultuous time created opportunities for “external actors” to come into the industry and leave their mark.

“Some of the earliest news nerds were actually people that came in from the tech space or the software space and decided they wanted to do something a little bit more mission driven,” she said.

And they left a lasting mark, according to her research. While there was initial resistance to the news nerds at first, they’ve become an essential part of newsrooms in the digital era, Kosterich said.

“These people are becoming more and more central to revenue-related goals, as well as the principles and mission of journalism-related goals,” she said. “So I conclude with what I call institutional augmentation, which is this idea that there can be both. There can be the traditional journalist, but just as important, just as prominent, just as institutionalized are these news nerds, are these tech-driven journalists.”

Kosterich said she sees this next decade as a chance for news nerds to become “truly legitimized and institutionalized throughout the profession” as they begin to “reach and succeed in leadership management positions.”

“This collision of the older teams of journalism with new ways of understanding or doing news work really helps us think about organizational change, organizational processes that are necessary, specifically to sustain journalism,” she said. “In the case of news nerds, this really means more than just emphasizing the technology and the skills that come with the technology. It means really strategic change throughout the whole of the industry.”

Kosterich said this lesson also applies to the classes she teaches at the Gabelli School.

“The Business of New Media is one of my courses and we talk a lot about innovation and exploration and evolving skill sets—what does it mean to be a current, modern day, media professional?” she said.