skip to main content
Return to Fordham University
You are at:Home»Colleges and Schools»Gabelli School of Business»Gabelli School Launches “DEI and Sports” Speaker Series

With LGBTQ+ athletes in the news, at the center of state legislation, and in the heart of political debates, the Gabelli School Sports Business Initiative launched a Diversity Equity, and Inclusion and Sports Speaker Series that kicked off with a conversation around transgender and nonbinary athletes.

“Sports, like society, has to deal with difficult issues, especially now,” said Mark Conrad, J.D., founder and director of the initiative and associate professor of law and ethics at the Gabelli School. “In the past, there was this notion that sports should be separate from politics. But athletes and other stakeholders are human beings and they are affected by events that have occurred.” 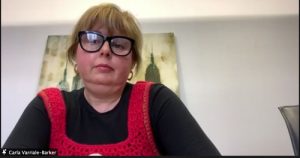 Carla Varriale-Barker, an attorney with the firm Segal McCambridge in New York City.

The first discussion, “Inclusion and Belonging: Moving Beyond the Binary,” was held on Zoom on Oct. 24 and featured Carla Varriale-Barker, an attorney with the firm Segal McCambridge in New York City. She serves as the firm’s chair of the sports, recreation, and entertainment group, where she has represented transgender and non-binary athletes, as well as an adjunct professor at Columbia University.

More than 50 members of the Fordham community the public attended the webinar and asked a variety of questions about the regulations, policies, and challenges surrounding transgender and nonbinary athletes in sports—particularly around transgender women competing in cisgender women’s sports.

She gave the example of Michael Phelps, as someone who had advantages over other swimmers, not because of his sex or gender, but because of his physical and training abilities.

When an attendee asked Varriale-Barker how she would respond to concerns that somebody might say they are a transgender woman just to get a college scholarship, she noted that the “gender imposters” are not as big a threat as some make them out to be.

“Is there a genuine concern about gender imposters? I would say no,” she said. “In my experience, for example, with Kye Allums [the first openly transgender player in NCAA Division 1 basketball]—the change in hormones is dramatic and devastating and significant. I do not believe that people are trifling with their medical condition in order to gain an advantage in sports.”

She noted that she would like more data and science around how hormone levels influenced sports performances.

“I feel like we’re just scratching the surface of how important the hormone component is to all of this in order to understand the unfair advantage argument,” she said. “But I don’t think that there is a genuine good faith concern that people are gender imposters in order to get a scholarship.”

Varriale-Barker also explained how various sports organizations have different policies around transgender athletes. For example, the International Olympic Committee (IOC) regulations have moved away from testing testosterone levels to what Varriale-Barker described as a “more inclusive way of incorporating participation.”

A statement from the IOC said, “the framework is aimed at ensuring that competition in each of these categories is fair and safe, and that athletes are not excluded solely on the basis of their transgender identity or sex variations.”

In Jan. 2022, the NCAA updated its policy to require transgender student-athletes to “document sport-specific testosterone levels” at the start of the season and then a second one, six months after, as well as documented levels four weeks before championship selections. The NCCA stated that these policies help with the “support of transgender student-athletes and the fostering of fairness across college sports.”

Varriale-Barker said that she was concerned by recent state legislation that bans transgender participation in sports, especially laws that to try and stop gender affirming care. She said that she would like people to think of the role that sports can play in people’s lives, like Allums, who used it as an outlet.

“Sports are a training ground for leadership,” she said. “Sports provide a vehicle for positive body image, teamwork, confidence. Sports are really important, and everyone should have access to sports.”

At the Heart of the Series

Conrad said that the first event was exactly what he was hoping the series would be.

“It’s not sports-talk radio,” Conrad said, adding that he would love this series and initiative as a whole to become “the NPR of these topics.”

The series dovetails with a new course Conrad is teaching this fall, also called DEI and Sports. It focuses on business and ethical issues related to diversity, equity, and inclusion (DEI) in professional, amateur, and international sports from the point of view of athletes, teams, leagues, sports organizations, and fans.

While the class focuses on textbook theories and classroom discussion, Conrad said pairing it with the speaker series will help his students understand these issues in a new way.

“When you hear people who have been at the frontlines of many of these issues, it adds a different dimension, it adds depth to the learning experience,” he said.

Varriale-Barker also works to do this in the class she teaches at Columbia University. For example, she invited Allums to share his experience with her class. He talked about how he “transitioned to become a man, what that was like in terms of sports participation, the freedom that came about having transitioned to a persona, a gender, a sex that mirrored who [he]was on the inside.”

What was most powerful for Varriale-Barker and her students was to hear Allums describe how “sports was a vehicle to help Kye cope with anxiety and psychological issues.”

Varriale-Barker said athletes like Allums are why she works on these issues.

“The legal issues to me are intertwined with the ethical and the big questions in life—what is my higher self? How do I live authentically? How do I support other people living authentically?” she said.

The next speaker event will focus on issues related to doping and deception surrounding the Nike Elite Running Team. Kara Goucher, an Olympic long-distance runner, will speak on Monday, November 14 at 4 p.m. about her book The Longest Race, which will debut in March 2023 and dive into the “secret world of abuse, doping, and deception on Nike’s Elite Running Team.”

Registration is open to all members of the Fordham community and to the public.