skip to main content
Return to Fordham University
You are at:Home»Colleges and Schools»Gabelli School of Business»Fordham Student Documents Conflict in her Homeland 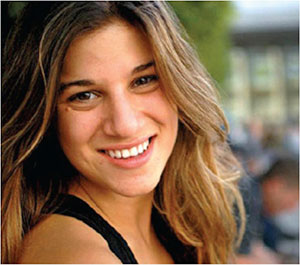 When she’s not studying for her classes in marketing, Adriana Krasniansky, a rising senior at the Gabelli School of Business, is devoting her spare time to a passionate conviction: Trying to save her homeland.

Krasniansky, who was born in Ukraine, helped found Group for Tomorrow’s Ukraine in response to the deadly conflict between European-aligned nationalists and pro-Russian forces. She formed the group last November along with five non-Fordham students she grew up with in Cleveland. Through their website and social media, the team hopes to creatively and accurately relay events transpiring in Ukraine to an English-speaking audience.

In April, Krasniansky took part in a Fordham panel discussion about the unrest in Ukraine at the New York Athletic Club that drew more than 100 people.

With the goal to put a face to the protesters in Maidan Square in Kiev, the nation’s capital, the panelists showed several video clips of average Ukrainians, including a shop owner and an impassioned 80-year-old man.

The biggest misconception about Euromaidan, as the demonstrations in the capital were known, is that the protestors are disorganized and motivated by violence, Krasniansky said. In reality, “these people were incredibly organized,” she said, and even “started their own soup kitchens for the hungry.”

Krasniansky and her group have worked with National Public Radio and the U.S. House of Representatives to help convey what they see as the facts—that these demonstrations were “rooted in peace,” she said.

In addition to sharing anecdotes of life in Ukraine and providing English translations of speeches and documents on its website, the group has commissioned some university professors to provide analysis of the developments there. It has also sponsored talks at three U.S. colleges on the subject.

While Krasniansky was studying abroad at the Fordham London Centre at Heythrop College last fall, she got a text from a friend who “asked why I wasn’t in Ukraine” in solidarity with her people.

“I said I have finals and I had work, and wasn’t able to go over, and he told me this is a once-in-a-lifetime opportunity, and it’s kind of our civic duty as informed Ukrainian Americans,” she said.

Krasniansky, a former intern at the United Nations Department of Public Information and founding director of a Ukrainian-inspired design firm, bread&salt designs, made it to Ukraine in December, along with a filmmaker from DePaul University. Together they interviewed local experts and leaders—including Sen. John McCain, who was visiting Kiev to show support for Ukrainians protesting the actions of President Viktor Yanukovych. Their reporting from that trip is being made into a documentary.

Although the initial coverage of the group focused on Yanukovych’s backing out of a trade agreement with the European Union, Russia’s recent invasion and annexation of the Crimean Peninsula has shifted that issue to the background, as the territorial integrity of the country itself is now of concern.

For Krasniansky, the country represents not only her roots, but also an opportunity for entrepreneurs such as herself who have been taught at the Gabelli School to think globally. Part of what makes the country’s descent into chaos so painful is that “it’s one of the epicenters of development in our modern world,” she said. A free and democratic Ukraine, she said, could be a catalyst for change toward a more democratic Eastern Europe and Asia.

“I’m a Ukrainian American so I have a dual identity that is very hard to reconcile because, in the United States, we are so privileged in our rights that we often forget that most of the world doesn’t live with that,” she said. “That creates a veil of ignorance around [these events]. So a lot of the task is identifying the veil, accepting the veil, and overcoming it. I think that’s a very important thing for anyone to do who works in an international sphere.” President Yanukovych was removed from power in February, and on May 25 the country elected a new president, Petro Poroshenko, who aims to bring Ukraine closer to the European Union.

Group for Tomorrow’s Ukraine sent three of its members to Ukraine to report on the elections. Krasniansky coordinated coverage of their work in collaboration with WBEZ, NPR’s Chicago affiliate. “Ukrainians really want a change of life and they don’t trust the regime,” said Krasniansky at the panel in April. “The citizens—both young and old—are willing to sacrifice everything for hope.”

Reporting by Group for Tomorrow’s Ukraine can be found at projectmaidan.com.