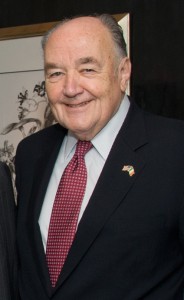 The Fordham University community mourns the death of J. Kenneth Hickman, GABELLI ’51, a former member of the Fordham Board of Trustees.

“We have lost a giant in Ken Hickman,” said Joseph M. McShane, SJ, president of Fordham. “He gave generously to Fordham in service and in intellectual engagement—building ties between the University and the United Nations, strengthening the Orthodoxy Christian Studies Program, and supporting the Nostra Aetate dialogues on Catholic-Jewish relations. We will miss him terribly, and our hearts go out to his family and loved ones in their hour of loss.”

A native of Brooklyn, Hickman attended Regis High School and earned a bachelor’s degree in accounting at the Gabelli School of Business by taking classes at night for five years. Upon graduation, he fought in the Korean War, serving until 1953 as a first lieutenant with an anti-aircraft artillery unit.

He joined the accounting firm Arthur Andersen & Co. in 1953 and became a managing partner of the New Jersey office in 1963. He returned to the New York office as an audit partner and director of the International Business Practice in 1972, a position he maintained until he retired from the company in 1990.

A big believer in the value of international business ties, he was the first chairman of the European communities committee of the National Foreign Trade Council, from 1982 to 1987, and was active in promoting business ties between the United States and the former Soviet Union.

After leaving Andersen, he spent eight years as a managing director for Grubb & Ellis Real Estate. He had been an independent business consultant since January 1991.

At Fordham, Hickman was elected to the board of the Fordham School of Business Alumni Association in 1965 and named the school’s “Alumni Man of the Year” in 1966.

Most recently, he was a trustee emeritus and a member of both the Graduate School of Arts and Sciences Advisory Board and the 1841 Society.

He is survived by his wife, Irene, and his three daughters, Patricia, Carolyn, GABELLI ’98, and Beth.

The family appreciates your prayers and requests that gifts in memory of Ken Hickman be made to Fordham University.