skip to main content
Return to Fordham University
You are at:Home»Colleges and Schools»Fordham College at Rose Hill»Want to Solve Problems Effectively? Fail First, Says Mathematician
Audience members ruminate on Burger’s puzzles. Photos by Taylor Ha
Four years ago, Edward Burger, Ph.D., sat with a third-grader at a kitchen table. The boy, Seamus—the son of Burger’s old college friends—brought out a big stack of math homework and set it down on the table.

Yes, said Burger, president of Southwestern University, a mathematics professor, and the author of a new book called “Making Up Your Own Mind: Thinking Effectively through Creative Puzzle-Solving,” which was the subject of his presentation at Fordham College at Rose Hill on Oct. 3.

The boy asked him for help. Burger scanned the math problems. Try the question about donuts, he suggested. But Seamus was stumped.

“He was, basically, intellectually constipated,” Burger remembered. “He was pushing and pushing, and not one idea would come out.”

So they tried something different.

“When I say go, I want you to give me an answer that you’re confident is wrong,” said Burger.

The boy was wrong, but he was close. And that was the point. Instead of just sitting there, trying to solve a problem he couldn’t, he took action. He ignored the pressure of getting the right answer, got a wrong answer, and learned from his mistakes. And once he did, the right answer wasn’t far behind.

“Effective failure is how you respond to failure. So the failing itself—not that interesting or important,” he said. “It’s what you do next.”

This concept—intentionally failing, and then gaining a different perspective that allows you to grow and react in a meaningful way—was the foundation of Burger’s presentation, “Making Up Your Own Mind: Thinking Effectively through Creative Puzzle-Solving.”

“Now, to be clear, I’m not suggesting that you do this on your final exam,” he told the students at the lecture. “But it’s an intermediate step.”

The lecture, co-sponsored by the Rose Hill dean’s office, the math department, and the Graduate School of Education, was about how to think more effectively and creatively in our daily lives. Burger’s advice, he said, could apply to all aspects of life: work, academic, personal.

Failing effectively was just one part of a three-part formula that Burger developed and described to the audience gathered in Keating Hall. 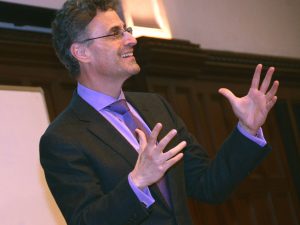 Understand simple things deeply. Don’t try to understanding something that, at first glance, seems very complicated, Burger said. Focus on something simple that’s related to that complicated problem. Examine it at a “subatomic particle level,” until you’ve noticed some feature that didn’t register before. “You’ll begin to understand that simple thing deeper, and then the more complex thing that you were first struggling with becomes easier to think about.”

Add the adjective. When you approach a math question, your first instinct is to solve it, said Burger. That can be a bad approach if you’re not fluent in the material. “Back up. Force yourself to describe it. Add as many descriptors as you can to describe the thing that you’re looking at. And every word that you add is going to reveal something you otherwise wouldn’t have seen,” he said.

Fail intentionally. Failure is good for you, he emphasized—as long as you gain some new insight from that failure, and then respond in a thoughtful way.

The audience was riveted. “How did you come up with this stuff?” asked one man.

It was an idea that was more than 20 years in the making, said Burger. He integrated these three steps into a class he developed at Southwestern University, where he gave students puzzles on which to practice this mindset, and eventually encouraged them to apply it to their own everyday lives.

After explaining the three-part approach, Burger quizzed his audience with a problem from his new book.

“Imagine that you have a whole bunch of dominos, and each domino will cover exactly two squares,” he said. “And so the question is, can you cover each chess board with dominos so that every domino covers two squares, every square is covered, and no square is covered by two dominos?” 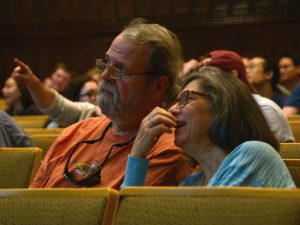 For two minutes, he said, apply those three practices to a puzzle. Brainstorm with the strangers next to you. And don’t actually solve the puzzles. Practice this way of thinking, and see where it leads you.

Each chess board had an even number of squares. The first board had 64.

“Sixty-four is a big number. What if I thought about a smaller chess board?” Burger said. “So understand simple things deeply.” Using a black ballpoint pen, he sketched the simplest version of the normal board—a two-by-two version.

And then, after drawing mini versions of the other two boards, an audience member “added the adjective.” The chess boards, said the audience member, were “white and black.” In a regular chessboard, a Domino needs to cover a white square and a black square, Burger reasoned. Then the audience noticed something different: the colors of the tiles that were removed. In the second board, a black and white tile were removed. In the third board, two black tiles were removed. Thus, the third board would not work.

“Just using those three things, you now see a chess board differently. And in some sense, I think that’s a metaphor for what we have within ourselves—the power we have through our own thoughts, when harnessed effectively, to see everything differently,” he continued. “And more magically.”