skip to main content
Return to Fordham University
You are at:Home»Colleges and Schools»Fordham College at Rose Hill»Students Learn Strategies for Happiness in New Psychology Class
Photos by Taylor Ha
Twenty-seven college students sit in a second-floor classroom in Keating Hall, surrounded by symbols of their busy lives: Starbucks cups, bulging backpacks, and open laptops. But at the beginning of class, they close their computers and follow their professor’s instructions to flatten their feet on the ground, straighten the curve of their spine, and close their eyes.

For five minutes, they focus on only one thing—the cadence of their breathing—and let the rest of the world fade away.

It’s a key exercise that’s part of a brand new psychology course at Fordham this semester—The Psychology of Personal Well-Being: How to Live a Happy Life, taught by David Marcotte, S.J. Every week, Father Marcotte teaches the students strategies to increase happiness, shows them how to cope effectively with stress, and ties everything back to empirical research on the neuroscience of well-being. He begins class with a five-minute mindful meditation exercise, designed to increase self-awareness and help students hone in on the present moment.

“The main goal is to help them be their best self,” said Father Marcotte, “and use that best self to make a difference in the lives of others—to contribute to the community in a meaningful way.”

College students are in the midst of “emerging adulthood,” he explained. This is often accompanied by emotional and mental distress—not just at Fordham, but at college campuses nationwide. A fifth of college students across the country—among more than 67,000 surveyed students—reported they were stressed or suicidal in the past year, according to a study published last September in the journal Depression & Anxiety. Father Marcotte’s class was created to help combat that, he said.

The Power of Gratitude

As humans, our brains are prewired for negativity; fear and anxiety helped our ancient ancestors survive. But that means we instinctively focus on the negative aspects of our environment, Father Marcotte explained. We also harbor emotions like envy, resentment, greed, and bitterness. They’re normal parts of life, he said, but if we allow them to fester, they make us miserable.

“Negative events are like a sponge. When they get wet, they start getting bigger and bigger,” he said. “And if we’re not doing something to counteract that, the sponge gets so big that it fills our head.” 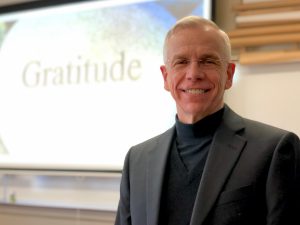 In his penultimate lecture on Dec. 4, he spoke about how students can overcome negative thinking with a simple yet powerful solution—gratitude. Being thankful is more beneficial than being optimistic, hopeful, or even compassionate when it comes to mental health and satisfaction, he said. Studies have shown that when people practice gratitude through everyday activities like journal writing, they tend to fare better than those who don’t. They cope better with stress, recover from illnesses faster, and view life through a rosier lens.

After the mini-meditation session at the beginning of class, he asked the students to review their homework assignment—a written reflection of four things they’re grateful for—with their peers.

Chantal Chevalier, FCRH ’20, said she was grateful for her 19-year-old sister and her mother, a woman she calls her “best friend” who single-handedly raised two daughters.

“If I don’t tell her I love her before I leave [the house in the morning], something’s wrong,” Chevalier said.

The student sitting behind her, Calli Prifti, FCRH ’19, said she was grateful for her health after almost losing her “second mom.” Last winter, her mother’s best friend suffered a brain aneurysm. She was unresponsive for 10 hours and nearly comatose for a week. Doctors said she might not survive, Prifti recalled. But a year later, she’s alive and well.

“We’re on autopilot so much of the time. We don’t think about what could go wrong,” Father Marcotte told the class. “A car accident an hour from now could paralyze us from the waist down—or neck down—for the rest of our lives. It’s pretty terrifying if you stop and think about it for a second.”

In an open class discussion, students shared the little things they were grateful for: pillows, hot water, the ability to attend college, getting advice on a research proposal, being alone in a normally crowded subway car. But when Father Marcotte left the classroom, the students spoke more candidly about their final thoughts on the new psychology course.

“Before I took this class, I always felt like I was kind of alone in my problems,” said Allie Rutter, FCRH ’19. “That everyone else is so put together and has their life figured out, and I don’t. [But] everyone has been really open, and we’ve all gotten very close as a result of the class,” she concluded, as several students nodded their heads in agreement.

Chevalier called it a “safe space” where students receive helpful, day-to-day strategies supported by something that made a difference to her—empirical data.

“It’s not like a self-help book,” she said. “It’s actual research that has proved that we can improve our well-being and our own happiness.”

Perhaps most important of all, the class—which is also being taught next semester—inspired a new outlook on life for many of the students. Isabella Russo-Tiesi, FCRH ’19, said she used to complain about little things to her friends: presentations, upcoming papers, school. But after everything she experienced this semester—taking the LSAT, spending time with a little girl battling cancer, and learning strategies to improve her well-being—her mindset has matured.

“Without taking this class,” she said, “I would be reacting in the negative ways that I did before.”