skip to main content
Return to Fordham University
You are at:Home»Colleges and Schools»Fordham College at Rose Hill»Students Find Friendship and Vulnerability in New Writing Class
Gambito’s class practices yoga at the McGinley Center. Photos courtesy of Sarah Gambito
For the past semester at Fordham, a new class has helped students become better writers and people.

It all began with a professor named Sarah Gambito, an award-winning poet and director of Fordham’s creative writing program. She had heard about Yale’s most popular class of all time—Psychology and the Good Life, a college course designed to teach students how to have a happier life. She thought it was something she could bring to Fordham.

But Gambito’s class, titled The Good Life, has a different take on happiness. Through twice-weekly lectures, Gambito taught 16 students how creative writing can spark a deeper sense of personal well-being—and vice versa.

“The point is how can creative writing help usher us into a greater—a better—sense of living?” Gambito said. “It’s been said that a good life is a creative life.”

Yoga, Succulents, and Adventures in the Bronx

At the beginning of the semester, Gambito gifted each student with a small green succulent. Over the next few months, the students fed and watered their succulents, took notes about their development, and watched their plant babies grow. 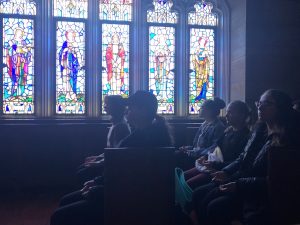 Students meditate in the Blue Chapel at the Rose Hill campus, with their palms facing up—a small gesture that shows their minds are open and willing to receive new ideas, said Gambito.

In the classroom, they took a meditative approach toward the creative writing process, drawing on the four main goals of life in the Hindu religion: dharma (truth), kama (joy), artha (prosperity), and moksha (liberation). For one class session, they gathered at the McGinley Center for an afternoon of yoga, contemplation, and freewriting about their meditation experience. After a few rounds of yoga, they draped Korean white sheet masks across their faces, lay on mats and towels, and listened to a soothing, instrumental music playlist on Spotify. The idea was to quiet their bodies and listen to that small, still voice deep inside, said Gambito—a voice that’s often eclipsed by the noise of our everyday responsibilities.

Their expeditions also extended beyond the campus. Gambito sent them on a scavenger hunt through the New York Botanical Garden, where they free wrote about the flora and fauna. Another day, they visited Egidio Pastry Shop, a mom-and-pop store a few blocks from the Rose Hill campus, and reflected on their dining experience via Google reviews.

“Part of what it means to be a creative writer is to get out of the classroom and to be involved with your community,” Gambito explained.

Storytelling Over A Shared Meal

On their last day of class in Keating Hall, Gambito and her students shared a potluck supper.

Their classroom windowsill was laden with goodies baked or bought by students: vegan monkey bread, mini pizza bagels, empanadas. Gambito herself bought five pies from Bella’s Pizza, the place with “the best pizza in the Bronx,” she declared to the class—according to Google, that is.

As they ate, the students spoke about experiences that helped them become better creative writers or thinkers. Some brought meaningful objects: a drawing from a student’s favorite book, pencils tagged with poems on small slips of paper, homemade Irish soda bread, a student’s first published story for a Fordham student journal.

Then there was Fia Swanson, FCRH ’21, who brought in her most valuable piece of jewelry—a simple pair of bronze-colored, chandelier-style earrings. She asked her peers to guess who gave them to her.

“In popcorn style, yell out your first guess,” she said.

“Yourself!” someone said, as people laughed.

“Actually, my therapist gave me these,” Swanson answered.

In her senior year of high school, Swanson’s father contacted a therapist for her named Dr. P. She didn’t have time for any more clients. So without telling his daughter, he sent Dr. P something that Swanson had written: a personal essay about her identity, being biracial, and her childhood.

“She read it, and said, ‘I read what you wrote, and I just had to meet you,’” Swanson recalled. “I couldn’t believe it was my writing that would get me the therapy that changed my life.”

On the day of her last session with Dr. P, Swanson’s face was covered in tears.

“She hugged me that day, and I broke down crying like I never had before,” Swanson said. “When my father came to pick me up, she jokingly said to him, ‘She’s gonna write my book for me someday.’”

The last presenter, Haris Basic, FCRH ’21, recalled memories with his best friends of nine years, like watching a zombie movie together at one in the morning and reminiscing about their high school days during a six-hour car drive to Buffalo, New York.

“I wish they were here to hear you talk about that,” said a student. “Because it was just so beautiful.”

“They would roast me,” Basic said, as the rest of the class erupted into laughter.

As he finished his presentation and the class began to applaud, he suddenly broke in.

“Wait, wait … I wanted to thank you all and Professor Gambito for being people who have inspired me to explore my creative side through writing,” he said. “Thank you all for being open and accepting.”

In the final minutes of their last class, Gambito’s students reflected on what they’ve learned. Through workshopping each other’s work, the students say they learned that writing a good piece is a group effort. But perhaps most importantly, the course has shown them the importance of caring for both their mind and body. By becoming more in touch with their emotions and their body, the students say they have developed a crucial skill for good writing—being more vulnerable in the stories they write.

“The greatest text you can think about is the text of your life. And for you to be an author of that, for you to feel agency and empowerment [is very important],” Gambito said. “Sometimes that’s easy to forget—that you are the architect of the stories that you’re able to tell.”

The Good Life will be taught again next fall. 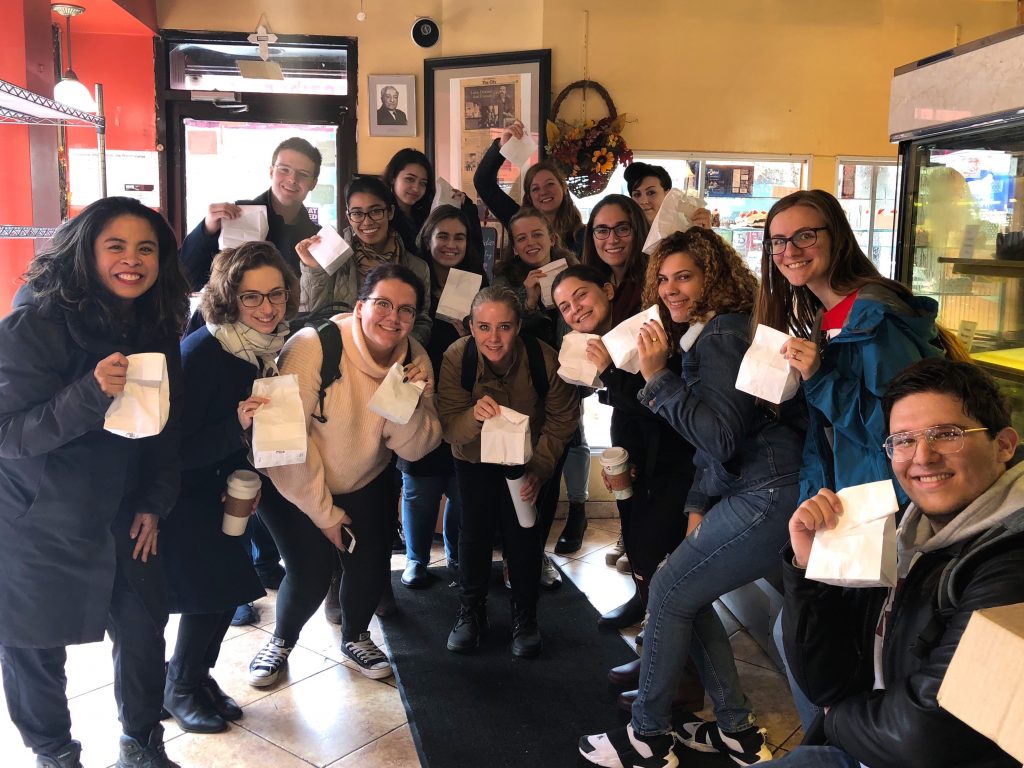 Gambito and her students pose with their goodies from Egidio Pastry Shop in the Bronx.