skip to main content
Return to Fordham University
You are at:Home»Colleges and Schools»Fordham College at Rose Hill»Student Veterans an Asset to Universities, Experts Say

Veterans make better students than many people think—including veterans themselves, said two experts from a leading student-veteran group in a stats-filled presentation at Rose Hill campus. But with the right supports in place, colleges and universities can help them get past that perception, they said.

On Nov. 2 at Keating Hall, the Fordham Veterans Association hosted two executive leaders from Student Veterans of America (SVA), a nonprofit organization that aids more than 1,500 colleges and 700,000 student veterans across the country. James Schmeling, SVA’s executive vice president, and Jared Lyon, SVA’s president and CEO, gave a talk geared toward faculty and staff at Fordham, which is home to around 500 student veterans and veteran dependants.

The day’s lecture was a personal topic for many in the room, including Matthew Butler, PCS ’16, director of Military and Veterans’ Services at Fordham and a former Marine, and the two guest speakers—both of whom are first-generation college students who served in the military. And, said Butler, who introduced the talk, it was also a chance to remember Fordham’s veterans who died nearly a century ago.

“Several of them didn’t come home … Those service members who fought in the war to end all wars are why we are here today.”

Schmeling spoke about the post-9/11 veteran population, their challenges with returning to civilian life, and how colleges and universities can benefit from having veterans in their student body.

“Forty-six percent of post-9/11 veterans are somewhere between 18 and 34,” he said. “That’s the population that’s returning to school.” 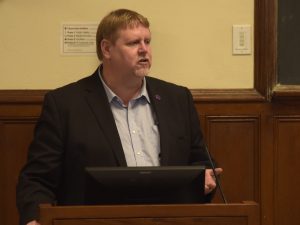 These veterans face a variety of challenges when they leave the military: navigating their veterans benefits, finding a job, acclimating to a non-combatant life, struggling with finances, and understanding how to apply their military skills to their new jobs, Schmeling said. But they’re also better students than most people might imagine.

On average, post-9/11 veterans achieve higher educational attainment than earlier generations and the general U.S. population, he said. Forty-one percent of post-9/11 veterans have a college or associate degree. On the other hand, only 28 percent of the total U.S. population have that same level of education. Many student veterans are well-educated, Schmeling said—but most people don’t think they are.

“I’ve just given you the data and the facts,” said Schmeling, who sourced statistics from the Bureau of Labor Statistics, the U.S. Department of Veterans Affairs, the U.S. Census Bureau, journal studies, and information collected in a collaboration between SVA and the Institute for Veterans and Military Veterans at Syracuse University. Then he paused.

“But these,” he said, introducing his next topic, “are the perceptions. And these perceptions are what are really, really important.” 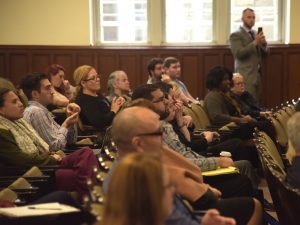 Faculty and staff at the lecture, titled “Student Veterans: A Valuable Asset to Higher Education”

Majorities from each population indicated that that they think veterans are more than or equally likely to obtain a bachelor’s degree as non-veterans, he said. However, the same is not true for advanced degrees.

A whopping 70 percent of military spouses said they believe military veterans are less likely than the average citizen to obtain a degree ranked around a Ph.D.

From Combat to Campus

But student veterans have both facts and data on their side. They’re not only college material—they’re an asset to college classrooms, Schmeling argued.

First off, student veterans aren’t likely to incur much debt. As of May 2018, the post-9/11 G.I. Bill/ Yellow Ribbon program has funded $75 billion for veterans’ tuition, fees, book stipends, and housing allowance, he said. Fordham’s commitment to the Yellow Ribbon program guarantees that all tuition and fees are fully covered for admitted eligible veterans.

Student veterans also bring diversity in age, ethnicity, marital status, and disabilities. In addition, they possess military-honed skills that can transfer to their studies and future jobs: work ethic and discipline, mental toughness, teamwork. And on average, he added, student veterans have a higher GPA than traditional students at four-year-degree-granting institutions nationwide.

“This is contrary to the picture that the media paints—of homelessness, of PTSD, of workplace violence, among other sorts of things,” he said. “Why is that? Well—what sells? A negative story, right?”

Veterans typically do best in colleges and universities that have a good peer support system, advisors, and networking opportunities, Schmeling and Lyon said. 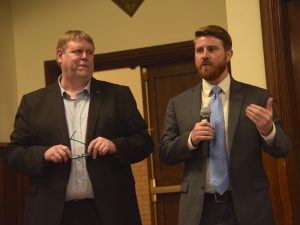 “The number one thing we can provide a student veteran—if you give them this one thing, they’re three times more likely to graduate than anything else—shocks a lot of people. It’s a peer. It’s a friend—someone you can relate to firsthand in that college environment,” Lyon said.

“I started my undergraduate experience at the age of 28 years old at Florida State University,” he said. “And as I looked across a sea of 42,000 undergraduates … I mean, one of these things was not like the other. And that was me.”

Schmeling added that many student veterans he’s spoken with, especially first-generation college students, had no idea they could graduate from college after serving in the military.

Anna Ponterosso, university registrar and director of academic records, said she found the lecture to be informative.

“We at Fordham value our veteran students as they bring a world of knowledge and skills,” she said. “For example, their dedication and ability to work as a team, as well as the discipline to focus on tasks in front of them. It’s important that as part of the Fordham family we show our support to our veteran students by attending such lectures. It’s one way to understand a tiny portion of what they go through in order to receive the benefits that they are entitled to for serving this country.”