skip to main content
Return to Fordham University
You are at:Home»Commencement»Commencement 2019»Natalie Ward, FCRH ’19: Addressing Air Quality in the Bronx
Photo by Taylor Ha
A Fordham senior has been studying a tiny particle that might have big implications.

For the past year, Natalie Ward, a math major at Fordham College at Rose Hill and a George and Mary Jane McCartney Research Fellow, has been exploring the link between PM 2.5—an air pollutant smaller than the cross-section of a human hair—and pediatric asthma in the Bronx.

“Millions of New Yorkers are breathing in this harmful pollutant, but have no clue it might be really affecting their lungs,” said Ward, whose research was funded by a Fordham undergraduate grant.

Studies have shown that long-term exposure to PM 2.5, which originates from vehicle exhaust and fuel combustion, is linked to increased rates of pediatric asthma. And high particle concentrations are a bigger problem in the Bronx, where asthma death rates are three times higher than the rest of the United States.

Last summer, Ward examined air quality in the borough. Using a Temtop air quality detector, a TV remote-sized device that measures PM 2.5 levels, she collected air samples from different public parks located along major roadways in the Fordham and University Heights neighborhoods of the Bronx. Ward recorded PM 2.5 concentrations during three time periods—peak traffic hour from 7 to 10 a.m., 12 to 2 p.m., and rush hour from 5 to 7 p.m.—nearly every day for two months. Then she compared those numbers to their “green” equivalent at the New York Botanical Garden and Edwards Parade on the Rose Hill campus—spaces located more than 300 meters from a major roadway.

Her solo study provided a better picture of air conditions in the borough, said city health experts and environmentalists in a recent AM New York profile of Ward’s work.

“I found overwhelmingly that the farther I am away from the roadways, the smaller the PM 2.5 concentration, meaning healthier air quality,” Ward said, after using Python programming language and math modeling techniques to analyze her data. “But the closer I am to highways, large diesel trucks standing and idling—things of that nature—the PM 2.5 [levels are]consistently very toxic for vulnerable populations.”

“When I go to the public parks and see soccer teams, kids playing, moms and babies in strollers, and see the PM 2.5 [levels]as harmful,” said Ward, “it’s a staggering difference that tells a lot about environmental injustices taking place right in the borough.”

An Alarming Discovery on the D Train

Her project was inspired by a program called Project True—a collaboration between Fordham and the Wildlife Conservation Society, where Ward worked on an urban ecology research project in 2017. It sparked her interest in how the natural landscape interacts with people and cities. It also made her think about a topic closer to home: the pediatric asthma crisis in the Bronx, her home for the past four years. 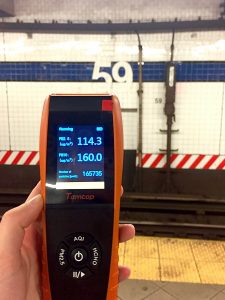 “It’s a disease that will be affecting cities as they grow in population, as more cars are added to the roads, and also as the EPA continues to deregulate air pollution,” Ward said.

She added that her preliminary subway data is “scary,” too.

Last September, she said she stood on the uptown subway platform at 59th Street and, on a whim, decided to measure the air quality. A “good” PM 2.5 concentration is 0 to 12 micrograms per cubic meter of air, according to the EPA. Ward’s measurement, however, was nearly 120—a number deemed “unhealthy for sensitive groups,” she said. And the further underground she ventured into the subway station, the higher the PM 2.5 concentration became.

“At every stop along the D train route, levels have been harmful to human health in general—not just for those who already have lung conditions or children,” Ward said, adding that other subway lines could have similar levels. “The levels are twice what I see typically at roadside locations … That ultimately could tell a lot about the health of subway workers and the millions of people who ride the MTA every day.”

Using Science to Push for Change

Ward will graduate with a bachelor’s degree in mathematics this May. She is currently enrolled in Fordham’s five-year master’s program in humanitarian studies, where she will continue conducting research that blends science and math with social justice. Right now, she is in the process of submitting her research article for publication. But over the next few years, Ward said she’s planning on collecting and comparing more quantitative data, particularly between the D and Q subway lines, with a better air quality detector.

She said her research is dedicated to the memory of Fordham first-year student Nicholas Booker, who died after a severe asthma attack last fall.

“Science can be used as a tool to enact change and advocate for justice,” Ward said. “Ultimately, it can be that tipping point to make lawmakers and policymakers see that there is a problem.”