skip to main content
Return to Fordham University
You are at:Home»Education and Social Services»High School Students Experience a Fordham Class on Zoom

Bronx high school students recently joined a Fordham undergraduate class for an online conversation about The Rat That Got Away: A Bronx Memoir—the story of Allen Jones, a former drug dealer who became a professional basketball player, radio personality, and banker. The virtual visit was also an opportunity for the teens to experience a college class, albeit on Zoom.

Mark Naison, Ph.D., professor of history and African and African American studies, said Jones’ life made for a great story because it was so “incredibly improbable” but also relatable.

“A lot of people growing up in the Bronx can really identify with his stories, in terms of what’s going in their families and neighborhoods, and what gives you the ability to get out of difficult circumstances and become successful,” said Naison, who co-authored the memoir, which was published in 2009 by Fordham University Press.

On Oct. 16, Naison and the Center for Community Engaged Learning (CCEL) invited a dozen students from Mott Hall Bronx High School to a class he teaches called The Bronx: Immigration, Race, and Culture. Though the books hadn’t come in time for the class, Naison made a compelling case for why the students should read it when they arrive. In the Zoom conversation, the class dissected the story’s main themes, including the importance of mentorship and code-switching, or changing the way you express yourself with different groups of people. They also talked about how books like The Rat That Got Away, whose author was profiled in The New York Times and a 2009 Fordham News story, can have the power to change people’s lives. 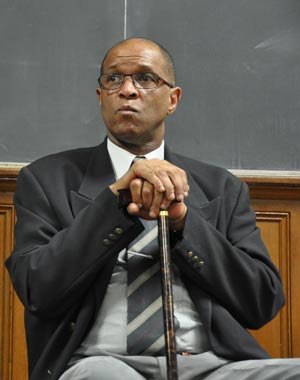 Allen Jones at Fordham in 2009. Photo by Janet Sassi

“It’s a book about a young man who grew up in the ‘50s in a housing project in the Bronx when public housing was a really desirable place to live, watched it deteriorate in the face of drug epidemics and the Vietnam War, and then led a double life as a drug dealer and a basketball player and ended up—because he had mentors—being sent to a New England prep school after spending four months in Rikers Island,” Naison said. “It’s a real, true story.”

An ‘Upside Down’ View on College Classes

In his memoir, Jones writes about how rapping was a popular way of communicating with his peers in the Sixties, said Naison. So Naison showed his students and guests the video of the song “Rapper’s Delight” by the Sugarhill Gang—the first hip-hop single to land in the Billboard top 40—and rapped to two different songs himself: “The Message” by Grandmaster Flash and the Furious Five and his own “Notorious Ph.D.”

“The students thought it was the funniest thing they’d ever seen,” Naison said. “This is turning their views of what a college is like—or college professors—a little upside down, but hopefully getting them excited about going to college and then having the opportunity to be creative and expand their horizons.”

Jainaba Camara, a senior at Mott Hall Bronx High School, said this class was the first college course she had attended. The media often portrays professors as strict instructors who don’t interact with their students, she wrote in an email. But at Fordham, a professor rapped to music, created a space where she felt comfortable sharing her thoughts, and taught her a valuable lesson that will help her prepare for college, she said.

“Everyone has a story, no matter how boring or uninteresting you think your life is. It was really motivating and gave me the push I needed to start my college essay,” said Camara, who wants to become a nurse or health care professional someday.

Keeping A Connection with the Community

Alison Rini, a senior English major at Fordham College at Rose Hill, said she recognized some of the high school students. The day before, she had virtually assisted a few of them with their Common Application college essays through a CCEL initiative that started this semester.

With everything being on Zoom, she said, it’s easy to have class sessions with local high schoolers—“to still keep that connection with the community even though they can’t physically go on campus,” said Rini, who works as a research assistant for the Bronx African-American History Project and the Bronx Italian-American History Initiative. “It was really refreshing to have everyone altogether.”