skip to main content
Return to Fordham University
You are at:Home»Colleges and Schools»Incoming Class Greeted by Cheers on Joyous Opening Day

Fordham welcomed the Class of 2020 with hugs, cheers, smiles, and even a little dancing, as the new students arrived on campus for an Aug. 28 move-in and orientation.

On a day when nary a cloud could be seen, swarms of current students greeted arriving families at the Lincoln Center and Rose Hill campuses, eager to carry their possessions to the residence halls where they’d spend the next year, and to help commuter students register for orientation activities.

Applicants hailed from a pool of nearly 45,000 from all 50 states. Geographically, the new class is one of the most diverse in the University’s history, with students enrolled from 44 states, and the District of Columbia. The acceptance rate was 45 percent.

Some activities recalled the traditions of past opening days. Joseph M. McShane, S.J., president of Fordham, greeted parents and students at Rose Hill as they drove onto campus. Incoming students were also greeted by name by upperclassmen as they arrived at their residence halls.

But this year also reflected the University’s 175th anniversary celebration. Thirsty visitors received water bottles branded “Dodransbicentennial,” in honor of the yearlong recognition of Fordham’s 175 years of service to New York. Following an evening Mass held outside of the University Church, a reenactment of founder Archbishop John Hughes’ greeting of the very first class was staged on the steps of Rose Hill’s Cunniffe Hall. A similar reenactment was held at the Lincoln Center campus earlier in the day. 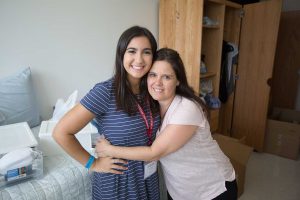 Arianna Mirones with her mother Sophia
Photo by John O’Boyle

“We need to create our own experiences,” said Maria. “Fordham is perfect because the campuses are near each other and just a van ride away, so we’ll still be in contact. I also love Broadway, so when Arianna gets discount tickets, I better be the person she chooses when she gets an extra!” 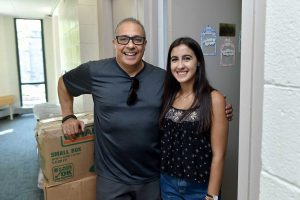 Maria Mirones and her father Steven.
Photo by Dana Maxson

The Howard twins, who are graduates of Fairfield Preparatory School, are not only both attending the Lincoln Center campus—Nick will study math, while Stephen is a natural sciences major—but they are roommates in McKeon Hall.

“We share a room at home so we knew it would be easy to dorm together,” Stephen said. “And we’re twins, so we get along well. It’ll be an easier transition to college.”

The twins—who were celebrating their 18th birthday on Opening Day—are by no means unfamiliar with Fordham. Their mother Julianne is an FCLC alumna who also studied math. Her brother is also an FCLC alumnus, while her father and another brother are School of Law alumni.

“Sending our oldest away to the city—it’s a big change,” said Julianne, a member of the Class of 1989. “But they went to Fairfield Prep, so the Jesuit connection is an easy fit.”

Class of 2020 Among Fordham’s Most Geographically Diverse 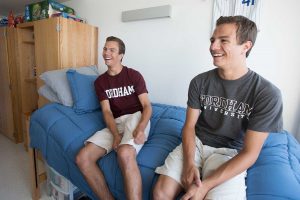 Evidence of the University’s growing national and international footprint was easy to find at Rose Hill. At Loyola Hall, Long Beach, California resident Matthew Lalonde spoke excitedly about experiencing a true change of the seasons, while Chicago native Caroline Martin gushed about her fall courses, particularly one on urbanism.

In Loschert Hall, Carly Johnson, also of Chicago, and her roommate Pari Marwah, of Mumbai, India, bonded over a mutual love of live music. Marwah, who plans to major in English with a focus on creative writing, moved to the United States two weeks ago, and has spent her time exploring the city and enjoying the “vastly better pizza,” music stores, and vintage clothing shops, she said.

This year’s incoming class is marked by stellar academic achievement, said John W. Buckley, associate vice president for undergraduate enrollment. The freshmen class has a mean SAT test score of 1285, a 10-point gain over last year, and a mean high school GPA of 3.65.

Buckley said the University has seen growth from the Mid-Atlantic region, particularly from Pennsylvania and Maryland, with 204 students from the region compared to last year’s 179. California continues to be a strong source of students as well, with 126 students enrolling compared to 118 the year before. Only New York, Connecticut, and New Jersey sent higher numbers of students.

The number of international first-year students climbed from 183 in 2015 to a total of 207 students hailing from 37 countries.

“It’s truly an extraordinary class from the standpoint of both geographic diversity and academic readiness,” Buckley said. Six students were accepted as presidential scholars, 83 as semifinalist merit scholars, and 103 dean’s scholars. Overall, 91 percent of the Class of 2020 was offered some sort of University financial aid.